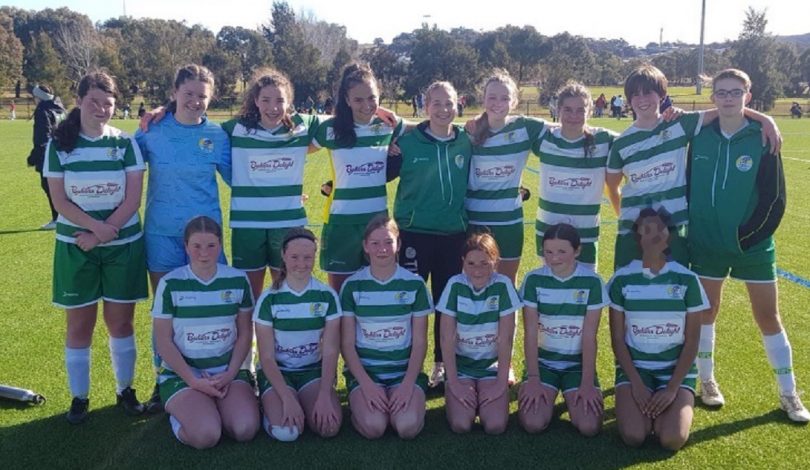 Mackenzie Haitsma (centre back, in green jumper) with her Tuggeranong United Football Club teammates during the 2021 season. Photo: Supplied.

Mackenzie Haitsma has played with the same group of girls for the same Capital Football club for the past four seasons.

But this season, moving up into the junior league, she’s “too old” to play with her peers.

“Nevermind she’ll be the same age as everyone else during the season, regulations go off the calendar year.”

Aware of this, Mackenzie signed up for the under-17 side before season registrations closed. Her mother then began applying to get her an age-related exemption so she could play in the under-15s with her friends.

“She received an exemption two years ago to play in the under-13s. It wasn’t a problem,” Ms Haitsma said.

This time, though, they’ve had to go through a process that Ms Haitsma described as “archaic”.

According to Capital Football’s regulations, an RAE is used to consider exemptions to “offset any physical disadvantage in relation to players of typical or early maturation by playing down an age group”.

It’s based on a player’s date of birth, height and weight, determining if they are considered at or below the 50th percentile for their age.

In Mackenzie’s case, she needed to be 162 cm or shorter and weigh 52 kg or less – criteria she doesn’t meet.

“They’ve denied her the chance to play because she’s ‘too heavy’,” Ms Haitsma said.

“She’s a healthy, active young woman who’s at a stage in her life where she’s growing. She doesn’t have the 5 kg they want her to lose. It’s body-shaming and they really need to step into the 21st century.”

While 15-year-old Mackenzie is upset she can’t play with her peers, she’s also speaking up because she feels such a standard could be damaging to other young women who might have to go through this process.

“I know teenagers, especially girls, can be insecure about their bodies,” she said.

“It’s ridiculous how they’re viewing kids’ bodies that are meant to be growing, and it makes me worry that if someone else is told their body is different to what they want, their first reaction could be not to eat.”

Mackenzie said her emotions have been “up and down” because of the whole experience.

“I’ve never viewed my body as overweight or anything, but I definitely feel more aware of my body now, especially at training,” she said.

“I would love for them [Capital Football] to have the regulations changed to a more appropriate standard.”

Capital Football CEO Chris Gardiner said the RAE standards were last reviewed in 2021 and they are benchmarked against those used in other jurisdictions.

“There is a significant amount of leeway in these rules. The use of the percentile framework provides significant scope for variation in individual development,” he said.

Approximately 20 age-related exemptions have been granted across the boys and girls team for Capital Football’s current season.

“Size is clearly a factor in determining both the fairness and safety of the game in that regard,” he said.

“The competition in question is an elite youth competition. So, for example, ‘wanting to play with friends’ is not a criterion.”

Ms Haitsma sought an independent review of Mackenzie’s case, but the reviewer found in favour of Capital Football.

“Of course, we want Mackenzie to be able to play with her peers, but we also don’t want this to happen to anyone else,” she said.

“How many other girls have gone through this? How many have stopped playing rather than going through this at all?”

She has also written to both sides of the ACT Government and the Football Federation Australia, arguing other jurisdictions have more ‘realistic’ exemption guidelines.

“The NSW regulations say she’s suited to play with her age group; she’s actually considered a late developer according to their standards,” Ms Haitsma said.

According to its 2018 regulations, a 15-year-old female is considered at or below the 50th percentile if they weigh 54 kg or less and are 163 cm or shorter.

“There should be a national standard so everyone is doing the same thing,” Ms Haitsma said.

“We’re going to continue to fight this. It’s an unbelievable situation that we don’t want to have happen to other girls.”

Err in the picture she already looks smaller than everyone else. Seriously, this isn’t for sheep stations people, let her play

So men can play on women’s team because: feelings, inclusion, fairness, tolerance blah blah but women must comply with science, biology and reality??? Can’t she identify as younger, smaller??

What was he wasting his time playing soccer? He should have been playing junior rugby league where many 12 year old Pacific Islander players have 5 0’clock shadows.

I certainly didn’t fancy tacking him and no one could. He’d score almost every time he ran the ball. A RAE rule would have been ideal back in the day.

These rules work really well and they have a number of common sense exceptions.

Mum, allegations that your daughter has been “fat shamed” is ridiculous.

If the regulations, determine she is 5 kg too heavy but she was allowed to play anyway, would that be fair to other kids?

It’s not all about your kid. It’s about all kids.

I’m sorry, I can’t see where body shaming come into it…? Sounds more like sour grapes!
The child is too old for an age group so she moves up to the next age group.
If she meets the REA criteria, she has a case for staying down, evidently she doesn’t – so she stays with her correct age group.
Maybe two years ago she was shorter and weighed in under the criteria for RAE evidently now she doesn’t.
The girl and her parents were happy to abide by the RAE when it suited them but now she doesn’t meet the criteria they whinge?
It appears she is seeking to play in the CPL competition? At that level of football it isn’t about friendship groups it’s about building the best team possible. Either she is selected for the U17s or she isn’t…
This girl will have an obvious advantage up against a child who is “only 4 days” outside the cutoff for U13s who is playing within the rules, not to mention the talented younger girls who may be in an U15 team through merit.
I would imagine CF receive many requests for RAEs and we never hear of them because the player accepts the rule is for everyone and accepts the decision gracefully.
Bottom line, go play in the community league if you want to play with your friends – there you can have two older aged girls in the team, or follow the rules for eligibility if you want to play at CPL level.
I wonder if this girl was ever selected for the U17s or not and this is simply a smoke and mirror attempt by her and/or her parents to keep her in the CPL?
I note that the club has not given comment and support to this allegation…

2 years ago you had the same problem, so you were aware that this could be an ongoing concern, so why didn’t you just swap her to a new team then?

There has to be a hard line somewhere. Plenty of good concrete available made right here in the ACT in the meantime.

What a ridiculous situation. You shouldn’t promise your kids they’ll get an exception to whatever you choose for them or whatever they want.
By pushing your daughter into that group your robbing a sport from other kids and giving your child an unfair advantage.
By claiming that your daughter is body shamed because she doesn’t meet a handicap category is insane.

I don’t think anyone actually body shamed anyone. There has to be guidelines for fairness and they weren’t being rude about her build/height. It would have been different if they said the words “she is too fat to play”.

There would have to be some cut-offs at some point?
I think it’s unfortunate, but it does make sense.

Susie Deards yet this player fits into the criteria for NSW but not ACT. The family is advocating for standardised criteria. Would it make any difference if she was born 4 days later? Her body measurements certainly wouldn’t matter if that was the case.

Alivia Opie But she wasn’t, so she’s four days too old and doesn’t meet the exemption criteria.

The issue is that the criteria itself isn’t fair… there’s already enough problems with getting girls and young women to continue playing sport in their teenage years and young adulthood. Women have been actively discriminated against playing sport for well over 100 years. This is another example. The use of this particular criteria IS archaic, doesn’t make sense and would likely deter someone from continuing to play sport with their friends which is a shame. Let alone the known negative downstream effects on young peoples health and well-being, social identity, and sense of belonging.

Alivia Opie she didn’t complain about it being unfair when it worked to her advantage!
Bottom line, there has to be a line in the sand somewhere and that will mean that some people will miss out and other won’t.
The girl is over age and is greater than the 50th percentile so this time she misses out.

Alivia – it did state in the article that she exceeded the cut offs for height and weight to be considered for that group. (It would be terrible if there are different standards for NSW and ACT though – odd!)

Alivia Opie if the girl had missed out with the NSW criteria then what? The whole country is body shaming her?
If she DOSNT like the NPL/CPL rules go play in community…
Or go play for a NSW team – if her skills are considered good enough to bump a kid who is the correct age from the team.

Alivia these rules are also primarily to keep players safe by having like-sized individuals play each other. This is not a ‘women’s thing’ these rules exist for boys sport too.
If girls and women don’t want to play sport that is maybe more to do with our lack of enthusiasm for it in society or as parents, surely she would have fun in another team too..

Shame on Capital Football. Yet it was okay a few years back for an exemption given to a certain club for 3 overage players to drop back a year and play under 15’s. They also just happened to be rep players who also played reserve grade that year for their club. Capital Rort more like it.

Phil Slater capital football only apply the rules to some clubs, they are a disgraceful organisation.