Are Canberra’s indigenous kids the worst? 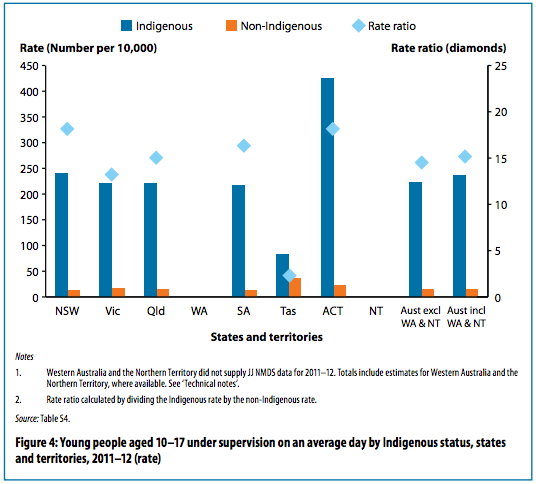 The Australian Institute of Health and Welfare have released Youth justice in Australia 2011–12: an overview and for better or worse kids in Canberra seem to be spending more time in care than elsewhere, with our indigenous numbers particularly striking.

In general Tasmania seems to lock up children the most, but why are we next?

4 Responses to Are Canberra’s indigenous kids the worst?
Filter
Showing only Website comments

Wouldn’t it mostly be because we probably have a much better system of welfare and child-protection than the other states? We have such a small territory and population that I assume it’s a lot easier to track the welfare of indigenous kids in the A.C.T, wouldn’t that likely explain it?

In general Tasmania seems to lock up children the most, but why are we next?

I don’t think so, I have lived in the NT for over 30 years and I can tell you that Indigenous children are far more prone to being mistreated and left to their own devises. Canberra has nowhere near the problems that the NT has and it is definitely getting worse in the NT every year.

Close to half our local homeless population is under 25. Poverty breeds crime, etc.

Judith White - 20 minutes ago
While speaking about racism to a friend whose skin is very, very dark, she said '" Ï don't see colour ." Does that make my f... View
Aaron Still - 11 hours ago
Rob Thomas clever way of putting it 👍 View
Gem Gemm - 14 hours ago
I am so utterly dumbfounded that people are upset over this? Like water is wet. It's absolutely a micro aggression and subtle... View
Business 38

chewy14 - 58 minutes ago
I do find it funny that so many activists and advocates for single areas seem to always have the reaction to any increased fu... View
What's On 12

Bronwyn Tolley - 7 hours ago
Karin Hagel Prince Phillip at Buckingham Palace, July 20th 1969. The day man landed on the moon ! View
Maya123 - 8 hours ago
LOL, I have about nine pairs of shoes I wear away from the house. Plus two handbags, which I haven't used for about two years... View
Tig Beswick - 10 hours ago
Robyn Lynette Pierce - when I was a little girl, I went to the NSW Governor General’s house because my dad had been invited... View
Breaking 1

carriew - 9 hours ago
Is there an update on what the package actually was? View
Opinion 9

longlunch - 11 hours ago
The only quiet things about this company are their refusal to respond to criticism, or to give details of the number and natu... View
Shaun Cummins - 13 hours ago
Even a bee is noisy! View
Property 8

realist - 12 hours ago
With all due respect Chris Miller, I think you have been brain washed by this government. It is quite clear with the number o... View
Opinion 66

Frank Landolina - 13 hours ago
Grammar check hates me. Drivers have been dumbed down with all this low speed strategy. Better driver training and improved r... View
Frank Landolina - 13 hours ago
We have funded down drivers with all the low speed limits. Europe has a different approach and wh... View
show more show less
*Results are based on activity within last 7 days

@The_RiotACT @The_RiotACT
Canberra's generally done well out of the Budget, but according to Ian Bushnell, there are still some glaring oversights https://t.co/a0aV2gDxpP (2 hours ago)

@The_RiotACT @The_RiotACT
Have you ever thought about getting involved in the fast-growing sport of trail running? The Stromlo Running Festival may be your perfect entry point https://t.co/CIff9vxQuN (12 hours ago)

@The_RiotACT @The_RiotACT
Fancy making the most of the beautiful autumn days here in the capital? There's plenty happening - so get out and about! https://t.co/GuOk85t9aP (13 hours ago)