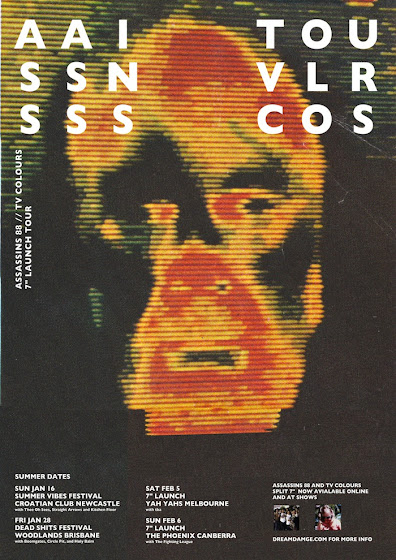 The crazy kids from Dream Damage Records have been in touch to let us know they’re launching vinyl at the Phoenix on Sunday night.

Dream Damage Records is psyched to announce the release of Assassins 88 & TV Colours Split 7? (now available to order online). Assassins have swapped the bass for guitar, with less noise and more melody. Both tracks were recorded in a shed last summer, with Mike from Teddy Trouble. A new EP will be available for download in February. TV Colours is the one man recording project from home town hero Bobby Kill. His side is some of the catchiest punks anthems out with The Kids Are All Grown Up named top song of 2010 by Polaroids of Androids. TV Colours is gearing up for the release of his debut LP out later in the year.

Over the past few months Assassins and TV Colours have been playing live as a three piece, playing each others songs and generally kicking ass. You can catch them up in Brisbane this weekend and in Sydney, Melbourne (Feb 5th show moved to march – more details soon) and Canberra over the coming months. The 7? is available to order online via the bigcartel and will be stocked in good record stores soon.

I’ve been hearing good buzz about Assassins 88, looking forward to seeing what the excitement’s about.

Ass Ass.
Simple and effective technique. Took me way too long to figure out what it actually said.

Lucy Humphreys - 3 hours ago
Jennifer Manson then I'd say tennis is not for you View
Croissant Henderson - 6 hours ago
Love means nothing to tennis people. View
Jennifer Manson - 8 hours ago
Many people do not find it entertaining at all, but rather boring, so it's good to see some fun. View
Public Sector 2

Deimeon Spilka - 9 hours ago
The amount of people who thought everyone was just speeding on purpose is staggering! I'm one of the people who got a fine in... View
Bob Foster - 11 hours ago
Infringements are 100% vehicle operators decision! View
Terri Lee Gill - 12 hours ago
Get over it you have had ample warnings and if you can’t control the pedal under your foot to abide by the law not only in... View
Community 4