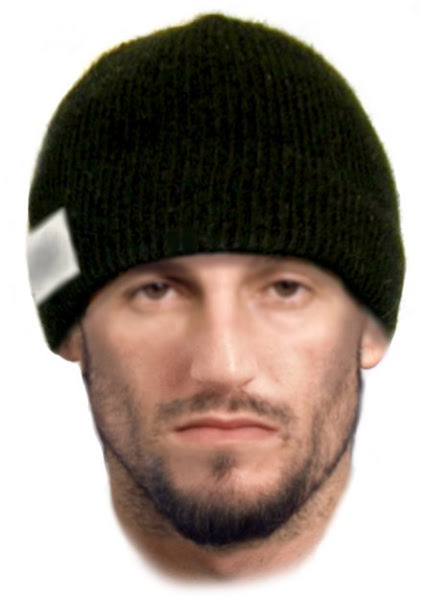 ACT Policing has issued a facefit of an offender who has used credit cards and a car stolen from a home in Forrest recently, and warned Canberra home owners to review their home security.

The credit card was with cash, personal items and car keys stolen from the residence by a brazen thief, who had entered the house in the early hours of the morning through an unsecured door while the occupants were asleep.

While detectives cannot firmly link the man in the facefit who used the stolen card to the offender who committed the burglary and stole the late model silver Audi TT from the Forrest home between 12.45am and 6.30am, Detective Sergeant John Giles from Criminal Investigations said the offences offered a strong reminder to householders about securing their doors and windows.

“Most burglaries committed in Canberra are opportunistic in nature,” Detective Sergeant Giles said.

“While we live in a city with an enviably low crime rate, householders need to be aware that an unlocked door or window is like an open invitation for thieves. We want people to walk around their home at night and double-check that their windows and doors are secure because in this case, the burglary was committed as the occupants were sleeping.”

Anyone who may recognise this man in the facefit or can assist in any other way with the investigation is urged to contact Crime Stoppers on 1800 333 000, or via the Crime Stoppers website on www.act.crimestoppers.com.au. Information can be provided anonymously.

David Beckham goes to the dark side.

Bogan Jason Statham? Give up now, he wont be caught.

He looks like a guy I know from ANU doing his PhD in biomechanics.

Bogan Jason Statham? Give up now, he wont be caught.

Peta-Rene Prior - 23 minutes ago
All kids should go to boarding schools?? Perhaps get all kids attending school to start with. View
Stas Idowu - 56 minutes ago
Synergy Group View
Lifestyle 8

Cary Elliot Johnson - 2 hours ago
Claire Lee Koo because its a democracy with varying opinions on an open column. View
Elizabeth Jones - 2 hours ago
I saw the petition but it wasn't clear it was supposed to be a few fenced playgrounds per region. I know being in an older pa... View
Nat Thomas - 4 hours ago
Megan Munro it’s definitely going to help everyone, it should have been done a long time ago. I hope the gates have fences! View
News 3

kenbehrens - 3 hours ago
Isn't bringing forward future infrustructure builds going to create a construction vacuum down the track? The other issue of... View
shannos - 3 hours ago
Exactly, investors chasing capital gains and creating a self -sustaining ponzi growth model at the expense of our younger gen... View
shannos - 3 hours ago
Too much emphasis on infrastructure and construction which is cyclic transient employment relying on developers growth model.... View
Lifestyle 11

John Moulis - 4 hours ago
A camera was affixed to the beacon on Mount Ainslie when construction of new Parliament house started in 1980. It took one ph... View
Lifestyle 19

@the_riotact @The_RiotACT
The ACT will welcome back fully vaccinated #students in the 2022 academic year, but fully #vaccinated rates in students' home countries could prevent a return to lecture halls https://t.co/22kqylryA9 (1 hour ago)

@the_riotact @The_RiotACT
The end of remote learning is nigh. Here's what you need to know about school life in Term 4 as the phased return to on-campus learning picks up steam https://t.co/edD4GowQ4c (2 hours ago)