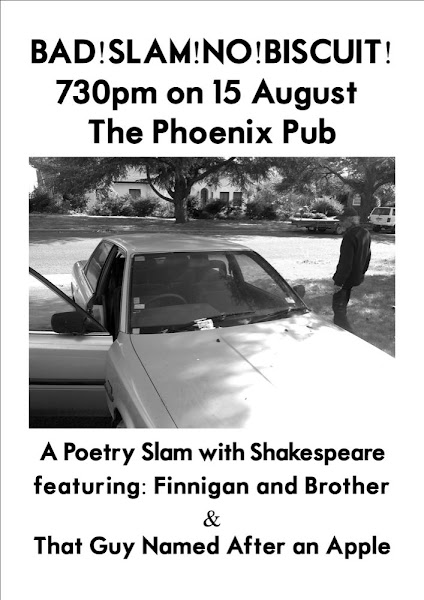 We hear that madness and badness returns to The Phoenix this Wednesday for the best free night in town:

BAD!SLAM!NO!BISCUIT! launches into August The Month of Mystery.

With two microphones, a stage, an audience, judges, The Score Adder, Shakespeare, Prizes and your choice of beer, cider, spirits or water and cordial or water without cordial. This is BAD!SLAM!NO!BISCUIT! and this is August the month of Mystery.

And BAD!SLAM!NO!BISCUIT! will be featuring the mysterious:

That Guy Named After an Apple

This is our first mystery feature act. Not much is known about That Guy Named After an Apple, he is after all a man of mystery. But his name tells you that “That Guy” could = Dude and that “Named After an Apple” could = Pink Lady. Yes, BAD!SLAM!NO!BISCUIT! could be bringing you Dude, Pink Lady. It will be…mysterious.

And BAD!SLAM!NO!BISCUIT! will bring you our second act feature act of mystery, straight from The Columbia:

Finnigan and Brother is the duo of siblings Chris (guitar/FX) and David Finnigan (words/radio/visuals). Finnigan and Brother first performed live at the 2009 Multicultural Fringe Festival in the Canberra. Their work featured in the launch edition of digital zine Goofbang, and their music has been featured on Sydney’s FBI Radio by New Weird Australia and Sunday Night at the Movies. They are currently in Medellin, Colombia, to work at the Campos de Gutierrez artist residency space on a series of new compositions. Then they will be in The Phoenix

So bring your words ‘cause we want them on stage because BAD!SLAM!NO!BISCUIT! is a poetry slam full of mystery.

And remember, no props, original material, no music, your words, on stage, 2 minutes, at The Phoenix Pub.

nobody - 7 minutes ago
Colonisation turned this continent into the great country it is today. If colonisation had not taken place, then MLA Paterson... View
Community 7

Capital Retro - 43 minutes ago
"The sports organisation would, of course, require a substantial amount of money from the ACT Government to attract the event... View
Hans Dimpel - 1 hour ago
big professional corporate sporting organizations just go around harvesting grants and subsidies off taxpayers, leaving less... View
JS9 - 1 hour ago
On what basis is Canberra Stadium not capable of staging events? Yes its far from an ideal stadium, but that doesn't mean it... View
News 10

Jimbo Lambert - 15 hours ago
Areas in Gungahlin haven't been mowed for at least 6 months! How hard is it to use our high rates money to employ some more m... View
Jimbo Lambert - 15 hours ago
Randy Goldberg you mean 6 months later? You must live in a more affluent area than Gungahlin, as it seems we have been alloca... View
show more show less
*Results are based on activity within last 7 days

@the_riotact @The_RiotACT
An inquiry into a proposal to #decriminalise possession of small amounts of illicit #drugs - including MDMA, heroin and ice - has recommended the bill be passed by the Assembly, albeit with a few changes https://t.co/47MpvWYcpS (24 minutes ago)

@the_riotact @The_RiotACT
Large bronze #statues of native animals will be a highlight of the proposed South Jerra Town #Park. Plans are taking shape with the new park to include a learn to ride bike track, sensory #playground, outdoor gym and large event space https://t.co/E71UMfWpIR (1 hour ago)

@the_riotact @The_RiotACT
There's more to hosting global #sporting events than stumping up cash to the organising body - you also need #venues which, as Tim Gavel notes, is also a problem for the ACT https://t.co/1ivTV1rHfA (3 hours ago)