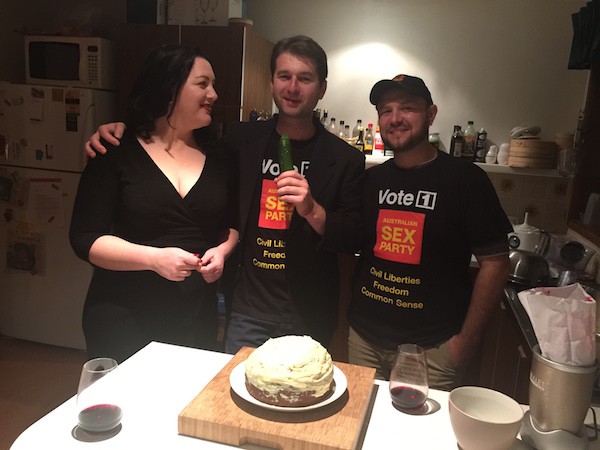 The sex has been taken out of ACT politics, at least on the ballot sheet, with the Australian Sex Party ACT removed from the ACT’s register of political parties today (1 June).

ACT Electoral Commissioner Damian Cantwell said the registration was cancelled on the grounds that the party did not have at least 100 members who were electors.

The Australian Sex Party was founded by Canberra woman Fiona Patten and her partner Robbie Swan in 2009, focusing on civil libertarian issues and personal freedoms, and with links to the sex industry lobby group the Eros Association, of which Ms Patten was CEO.

It fielded candidates at the state, federal and ACT level, with Ms Patten being elected to the Victorian Legislative Council in 2014.

She told the ABC that the new party would have a broader set of policies to appeal to “reasonable” voters at a time when politics is lurching to the far right and left.

“The extremists are really taking the lead in Australian politics at the moment and unless we fill that vacuum with something else they will continue to take over politics,” Ms Patten said. “So I’m hoping for a voice that is reasonable that represents the community.”

Ms Patten is considered to be an effective member of the Victorian Upper House.

Issues such as voluntary euthanasia and drug reform would remain central to the party’s platform, and she said at the time the Reason hoped to win more seats in the Upper House and contest the Senate at the next federal election.

The Sex Party fielded five candidates at the last ACT election in 2016.

Nine parties remain registered in the ACT. They are:

I travelled to Melbourne in 2014 to campaign for it in Victoria. Besides Fiona, Robbie, and Jorian, who bothered to come to Canberra to campaign for us? Having received a vote of 8%, and receiving public funding of over 30K, why was I not fully reimbursed for the campaign? Where did the 20K go that was promised to the ACT? As the Acting Agent for the party, why was the money earned in the ACT directed to Melbourne? I think it is time that the truth of the most successful minor party in the ACT was told properly, and that the spurious allegations made against me, particularly by the then President of the party – a complete skid mark, were corrected. Some of my dearest volunteers moved and went along with the name change to Reason. Two-years later, the party is still not registered. What assistance is HQ giving to those members who worked so hard for the Sex Party ACT in 2016? Why did the federal candidate Meredith Doig leave? Is Reason actually a party, or is it a political collective designed to promote one Independent? It’s time that the truth was told.

I think it might be time to tell the truth about this story. I just happened to come across it. This article is totally inaccurate, not due to a lack of journalistic prowess, but due to the truth not being told. As the party’s Secretary, Leader in the ACT, and Lead Candidate, I can tell you that the Sex Party ACT was not deregistered due to a lack of members; I held the details of at least 250 members. Doesn’t anyone find it coincidental that we ran out of members just as the National Executive undemocratically, and selfishly destroyed the brand that I had worked three-years to build, and then put us in a winning position in the 2016 ACT elections?

I honestly believe because I honestly know that the ACT Liberal Democrats have over 100 members in the Territory.

Which party are you with these days? It’s a bit hard to keep up with your ship jumping.

What? No Sun-Ripened Warm Tomato Party? 🙂 A lot of people might not be aware that in that first ACT self-government election in 1989 the National Party also stood, the only time they have ever contested an election in the ACT state or federal. When Liberal leader Trevor Kaine was asked about it he replied “What National Party?”

David Jenkins - 2 hours ago
Road rules aren't the same as licencing 🤷‍♂️. Make up your mind which you're going to have a whinge about. Given hor... View
Claudio Neumann - 6 hours ago
Jesse Pricsina I feel these vibes very strongly. also get off my lawn darn kids with their scooters View
Michael Ilsley - 7 hours ago
I love scooters, fabulous! View
News 12

Chris Prentice - 3 hours ago
Matthew Soall But it is a business. View
James Vetos - 4 hours ago
A committed centre of learning excellence... Nope, a one trick business struggling under a poor business model. Should be ash... View
Liam O'Toole - 6 hours ago
Emphasis on international students. ANU is discovering the results of putting all your eggs in one basket. View
News 68

ChrisinTurner - 10 hours ago
This is the private enterprise model driven by profit. Nationalise the clinic. View
News 73

Milestone Entertainment - 14 hours ago
Well said! We have been fortunate in Canberra, however the current restrictions on entertainment venues are crippling to both... View
News 27

chewy14 - 14 hours ago
You're still not getting it. Large scale renewable energy (wind and solar PV) is now cheaper than fossil fuels without any su... View
News 5

saphael7 - 15 hours ago
Does this mean that domestic violence is going to be brought to the park frequented by small children? View
show more show less
*Results are based on activity within last 7 days

@The_RiotACT @The_RiotACT
Adopted Canberran Jack Biilmann will be at the Street Theatre on Saturday, 8 May to tour his new album, Full Circle. Opening the show will be 17-year-old Tom Dunlop, with his first-ever live performance https://t.co/FMmwlEox3O (5 hours ago)

@The_RiotACT @The_RiotACT
With an alfresco living area complete with outdoor kitchen, you will feel like you are living in luxury in #Crace https://t.co/FiPwmUQolH (7 hours ago)