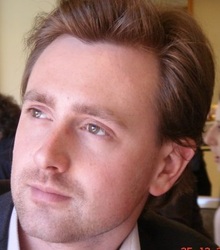 John is a Canberra-based actor and playwright. His play “Therapist” won the People’s Choice at Short+Sweet Sydney 2014. He is the author of more than 17 short plays including “Dracula Kidnaps Someone’s Bridesmaid” and “The Literary Monogamist” and one full-length play, “Alien Zoo”. His plays have been performed in Canberra, Brisbane and Sydney. As an actor he has performed with Centrepiece Theatre, Everyman Theatre, Canberra Repertory, Tempo Theatre and The Acting Company. He is one of the organisers of Crash Test Drama Canberra and has worked with the CADA Performance Troupe on script development.

Currently he is working on a full length play “Safety Dance” (with a planned debut late 2015) and will be appearing in Rachel Hogan’s new production of The Mandragora, a play written by Machiavelli. He is also co-directing a production of Much Ado About Nothing that will appear at Smith’s Alternative March 2015.

Where in the World is Frank Sparrow? – Canberra Youth Theatre (Review)

In The Next Room – NUTS (Review)

Where I End & You Begin – The Street Theatre (Review)

The Importance of Being Earnest – Canberra Theatre Centre (Review)

Jeremy Thomas - 32 seconds ago
Jorge it’s 100 percent renewables in the ACT. In any case, they are so small the their emissions would be way lower than a... View
Jon Billows - 7 minutes ago
Kriso Hadskini Two way street mate. Plenty of "elderly" don't have consideration for anyone else either. People in glass hous... View
Jorge Gatica - 13 minutes ago
Jane Kennedy how is there no emissions when the battery is charged with coal fired power stations View
Property 1

Ol L - 27 minutes ago
But apparently according to Mr Barr there is no link between increasing landlords costs via land tax and any rise in rents? I... View
Food & Wine 13

FB - 40 minutes ago
Canberra is certainly an odd place. Where else could you start a business getting people to pay $10 for a toasted sandwich. I... View
Ivana Ryan - 2 hours ago
Toasted sandwich and a coffee 😋 Bojana Simic View
Christopher Rompotis - 3 hours ago
Hannah next brunch catch up? 🤔 View
Lifestyle 27

thehutch - 12 hours ago
"There are almost 130 Councils in NSW, and most of them do a much better job with municipal services than the ACT Government.... View
News 1

HiddenDragon - 16 hours ago
Why stop with repatriation flights? The logical conclusion to the economies of scale argument (which is equally relevant to j... View
Capital Retro - 19 hours ago
Forget the "the significant costs and operational requirements associated with the program." being the reasons. The risk is u... View
Sport 4

@The_RiotACT @The_RiotACT
Funding issues from the developer of Queanbeyan's long-awaited cinema are delaying the project more than three years after its DA was first approved https://t.co/41vCKCl5hx (15 minutes ago)