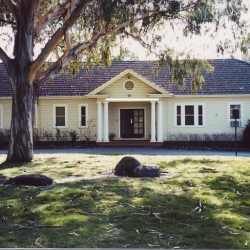 Born in the original Canberra Hospital, now part of ANU, in Balmain Cres in 1937. Worked in the Public Service until 1970 when I joined the NCDC fo a further 18 years. We left Canberra in 1988 after self government was 'illegally' introduced as I could see Canberra becoming a very expensive place to live. Development has gone on unchecked since 1988 and Gungahlin is a classic example of sardine living, horrible!

I have the doubtful honour of having attended 6 schools in Canberra and I think I am the only old boy of both Canberra Grammar and St Eddies. I now live on the Far South Coast near Merimbula.

Kevin Knudsen - 22 minutes ago
Christine Tancred or perhaps.. Federal government.... View
Christine Tancred - 28 minutes ago
I hate it when reporters refer to politicians or parliament as Canberra. We don't own them, we didn't all vote for them, and... View
Elouera Lea Lindquist - 6 hours ago
Timmy Holness officially the coldest hot-spot in Australia 🙄 View
News 5

Paul Chubb - 2 hours ago
Finland housing first is best practise. The idea is to place the homeless in normal housing: rental apartments etc and then w... View
Mathew Richards - 4 hours ago
Civic Flats, The great Wall in Melba, Mawson Units, The Narrabunda Housing, Oaks Estate. This is nothing new. The biggest pro... View
Gregg Heldon - 6 hours ago
Amanda Evans it's not a bad idea View
News 6

Gregg Heldon - 12 hours ago
George Watling probably not the only one View
Annie Mills - 13 hours ago
EJ Fallon where do they say that? View
News 67