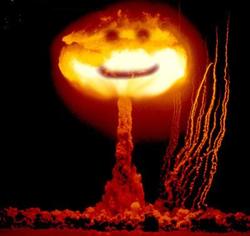 Skidbladnir is the name of a ship. The greatest of ships in all of Norse myth.

It was owned by the gods, could fold up smaller than a sheet of paper, hold the entire host of gods and enough food to last them a year, answered to spoken commands, and navigate itself.

But if you weren't entirely a god, it had a nasty habit of kicking you off.

The man behind the nickname doesn't actually like boats, he just liked the stories the boat showed up in.

Drakeford Drive as according to Territory and Municipal Services

Enrol, and help put (or prevent) an evil bastard in charge

Television for the Blind: You’re part of the rollout trial

Floodwatch 2012 – Have you seen the Bunyip of Oaks Estate?

The return of the Golliwog?

Penfold and Refshauge – Absurdism takes over the courtroom

And so Tralee continues…

Its just a shuffle to the Left…

Don’t like the Auditor-General’s Office, or love it too much to let it die? Have your say!

Election advertising up for review

The Burdens of Privelege

Poker machines, the money, and Labor

Major parties in a Zugzwang – Its easy being Green (for now)

Hooray for Floriade, now respect the little guys that keep it happening – [Or, On bees]

Peculiar break in at IP Australia

The Fountain of Furzer St

To all bleeding hearts, you may serve a purpose afterall

Road closed due to filming

Canberra Hospital: Even the Nurses say its crap

Andrea Mya Riboust - 2 hours ago
Matt the former I assure you 😄 View
The Martini Whisperer - 4 hours ago
Lucky they’re weren’t in Texas. View
HiddenDragon - 6 hours ago
So the Big Merino will be the command HQ for Gilead Down Under - and they said it couldn't happen here......... View
Food & Wine 12

Sam McCracken - 5 hours ago
Lea Powell agree to disagree then. We clearly see this from 2 different points of view, but if you re-read your comments you... View
HiddenDragon - 7 hours ago
Based on some of the apparently well-informed comments here about ACT public housing policies, it is truly fascinating to see... View
Lea Powell - 9 hours ago
Alicia Boardman exactly! View
Opinion 12