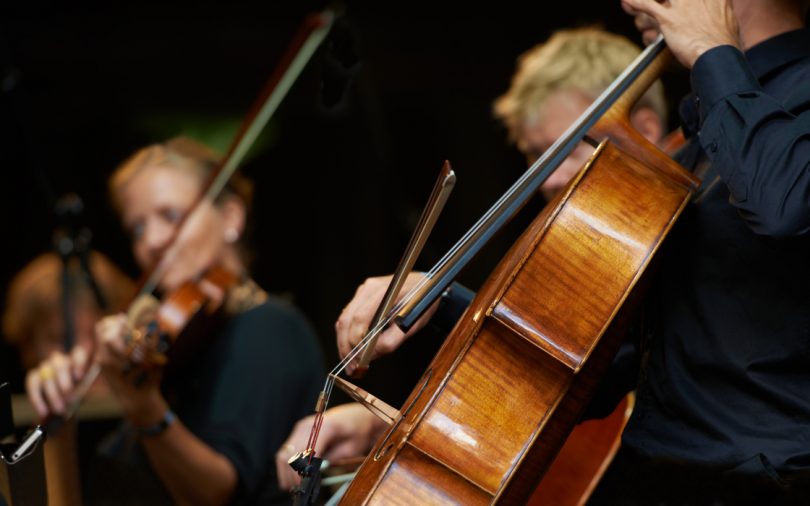 Students and staff are outraged at the Year 11 and 12 program’s axing.

In another blow to the Australian National University’s School of Music, a 30-year-old course it offers to Year 11 and 12 ACT music students has been axed after the loss of ACT Government funding.

Anger and dismay at the decision, quietly announced in an ArtsACT press release earlier in the year, has ignited on social media after the ANU confirmed last Thursday – amid growing anxiety – that it would no longer continue despite apparent reassurances from the university.

In a statement, an ANU spokesperson said the School of Music offered the ANU Extension Program’s Advanced Music Course, which provides one-on-one tutorials for year 11 and 12 ACT classical and jazz students and is delivered with support from ArtsACT and the ACT Education Directorate.

“Our understanding is the ACT Government funding is being redirected towards other community-based arts and music programs from 2019. While this decision will not affect students currently enrolled in the program, ANU is unable to open enrolments to students from 2019,” the spokesperson said.

“We’re disappointed we won’t be able to continue delivering this fantastic program, but ANU has a world-leading tertiary music program and ACT high school students are able to enhance their music education through the ANU Music Development Program.”

An ACT Government spokesperson said the decision was part of the refocusing of the programs that ANU provided under Community Outreach funding from the Government.

“This refocusing has resulted in a shift away from supporting students in the school environment, to supporting members across the whole community to access music programs and develop their artistic skills, in line with the aims of the 2015 ACT Arts Policy and the 2017 Social Inclusion in the Arts Plan,” the spokesperson said.

This had resulted in a range of new activities which had better reach into the wider community, especially for people experiencing disadvantage.

The spokesperson said school students still had many other ways to access music programs including the new Developing Musicians Program (non-auditioned for Year 7 to 12 students for music tuition and ensemble performances), which is part of the new Community Outreach Program. Students could also access other ACT Government-funded music programs including through Music For Canberra at the Ainslie Arts Centre, and music engagement activities by the Canberra Symphony Orchestra.

But people close to the program say that ironically its axing will affect gifted public school students who will no longer be able to benefit from free one-on-one tuition with School of Music teachers, nor perform with their peers in an environment of excellence offered by the School.

They believe the program offered a crucial step in young people’s development as musicians and was a clear pathway to higher studies, importantly at the ANU, and a musical career.

They say the community programs and colleges will not be able to meet the needs of high-level students, and will force families elsewhere.

A Save H Music Facebook page has been established with people posting their concerns and calling for a campaign to save the program. 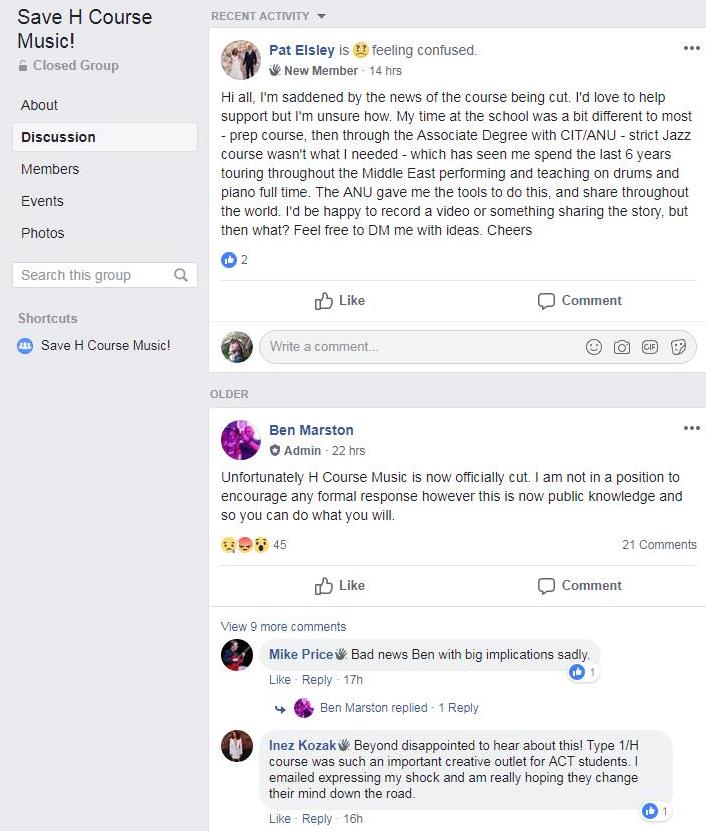 The entire program, which has about 60 students, is believed to only cost $270,000 a year and the teachers are sessional.

The ANU website says the Extension Program Advanced Music Course, also known as the Music for Colleges Program, is no longer available for application from 2019 onwards.

It offered musicians in Years 11 and 12 the opportunity to study either jazz or classical music at ANU with specialist tuition and ensemble direction, and has produced many outstanding musicians.

This is ridiculous- I think it’s more of a BSSS issue as the ACT doesn’t offer any Music extension courses for Year’s 11 & 12. It will be much more difficult for aspiring music students to audition successfully / competitively for tertiary level music courses without H Music OR a comparable T level Music extension course. But surely given the size of the ACT & the available expertise at ANU, it makes sense that they run this????!!!! Are the other H courses affected?? I don’t disagree with spreading the ArtsACT money to the community but the H course never really had this intent.

This was one of the best programs for young Pre tertiary musicians in the country and the only one in the ACT. So many have been nurtured and inspired by this program and this is an absolute disgrace. Tragic. Why has the ANU turned its back on music?

Wagga Wagga music school has just been given funding to help local musicians. What's the story with the ANU music school. This shouldn't be happening.

May Mac - 36 minutes ago
"I think striking a balance is key." Yes. Not everyone who wants a freestanding house wants the work of maintaining a yard, s... View
Melänie Janė - 1 hour ago
Ridiculous article. View
May Mac - 1 hour ago
In suburbs of a certain vintage when small blocks were as large as large blocks are now, I have seen properties that look lik... View
News 9

Judith Adraskan - 48 minutes ago
A lovely man who will be missed. I worked with him as a colleague for over 20yrs & he was forever gentle, polite & kind. RIP... View
Melissa Dean - 7 hours ago
Such a wonderful, hard working, caring man and friend, taken to soon. I will miss our chats. I learnt so much from him, and e... View
Motoring 39

Louis Larcan - 2 hours ago
And a bonnet scoop ! View
Community 2

Capital Retro - 6 hours ago
I should have stated the obvious namely most service station sites have ample space for both solar panels and batteries but I... View
Property 10

Elyse Albrecht - 6 hours ago
Caleb Albrecht lol apparently you can win an auction even after the hammer goes down 🤷🏼‍♀️ View
Jose Vega - 6 hours ago
In Spain loans for your own home is tax deductible.... Investment loans are not... Majority live in their own home. View
Joel Suryawanshi - 9 hours ago
Sarah Young we are also forgetting that the greedy real estate agents are bumping up the prices and attracting investors from... View
News 4

ACT resident - 10 hours ago
Is this more spin from the lessee? ALDI at Fyshwick did not proceed because there are very stringent rules in the ACT regardi... View
show more show less
*Results are based on activity within last 7 days

@The_RiotACT @The_RiotACT
The @CanberraLibs are calling for a Gonski-style review of the ACT's education system, and questioned the effectiveness of inquiry-based learning https://t.co/vfpwgh5Ocz (38 minutes ago)