Back to work and mind the 40 zones 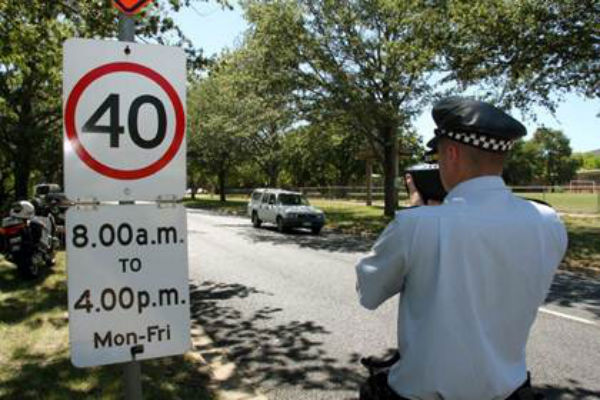 ACT Policing is advising motorists that 40km/h speed limits will be enforced in school zones for the start of the new school term on Monday (April 29).

Traffic Operations Station Sergeant Rod Anderson said the restrictions are in place between 8am and 4pm and warns that motorists who choose to ignore them will face tough penalties.

ACT Policing liaises with local schools regarding ongoing traffic issues in their area to ensure problem-areas are targeted.

“The highest recorded speed was a 21-year-old female who was caught speeding on College Street Bruce, adjacent Radford College. Police detected the driver travelling at 82km/h in a sign posted 40km/h school zone. She received a Traffic Infringement Notice for $664 and the loss of four demerit points,” Sergeant Anderson said.

“It’s important to remember that children – our most vulnerable road users – can be unpredictable around traffic and are not always aware of road safety. The 40km/h speed limit is necessary in school zones because it gives motorists extra time to stop in an unexpected situation.”

“Thankfully, there were no incidents where children were harmed in school zones last term. We want to keep it that way, so we’re asking the community to stay vigilant and keep school zones safe.”

Please keep an eye out for our school kids

@The_RiotACT @The_RiotACT
Penrith coach Ivan Cleary's been handed a $20,000 fine for questioning the integrity of referee Gerard Sutton in his side's 28-12 win over the @RaidersCanberra https://t.co/YXBr6BVHUI (21 minutes ago)