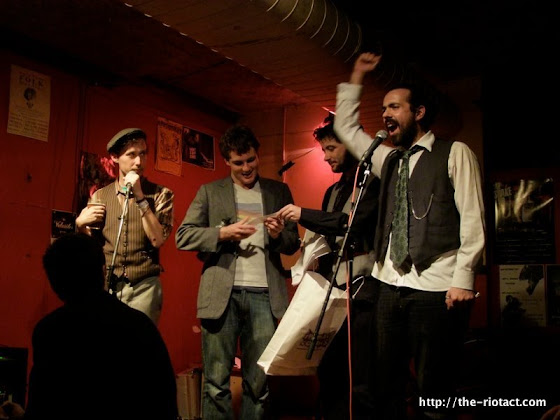 The following facebook event is highly recommended by your’s truly:

WE ARE ADDING JULIAN FLEETWOOD AS OUR GUEST FEATURE POET!

He will also be sacrificed for your judging pleasure.

SWEET JESUS ON A BICYCLE IT IS THAT TIME AGAIN!

Every year Poets from around Australia come together in a battle royalle of battleishish proportions at The Australian Poetry Slam!

Over the last few years the heats & final have been happening at the National Library, but they’ve decided they need to buy some more books or some sh*t so aren’t hosting us, so the powers have be have tossed it back to the whiskey bottle and used condom strewn gutter that it belongs in, and has BAD!SLAM!NO!BISCUIT and Traverse Poetry Slam heats with the final to be held at Smiths Alternative Bookshop on 12 November.

Two winners from the ACT will proceed to the National Finals in Sydney in December where they will fight for Canberra’s sweet virginal honour.

It will be more or less business as usual at Bad!Slam! — Poets sign up from 7.30 to 8pm. Slamming starts at 8pm. We will still have the Conflict Master & prizes for first timers, but the TOP 5 by points from the judges will progress to the final.

There are more rules, they’re pretty similar to our usual ones, but they’re below.

All entrants to the Australian Poetry Slam 2010 agree to abide by the following rules and regulations.

2. Enter at the venue on the night of the heat 30 minutes before the heat commences. Some states may have alternative sign-up processes please contact your state heat coordinator for more details.

3. Contestants must reside in the state in which they are competing. In some cases, if your nearest heat is interstate, an exception can be made. In such cases, if you compete interstate and are one of the two winners, you will progress to that state’s final.
Example: You live in NSW but your nearest heat is across the Victorian border in Swan Hill. You may compete there. If you are a winner at the Swan Hill heat, you progress to the Victorian State Final.

5. ABSOLUTE two minute limit. Time starts at your first word or when the timekeeper feels the performance has begun (no additional time allowed for introductions). Points will be deducted from the final score for exceeding the time limit — one point for every 30 seconds over time. For example: At 2:01 minutes you will lose a point. At 2:31 minutes you will lose another point…

6. Five judges chosen by the MC at random from the audience.

7. Judges hold up score cards using a 1 – 10 scale, with 10 being the highest. Of the five scores for each poet, only the middle three scores are counted. The decision of the judges is final.

8. Poem must be the original work of the performer written within the last 12 months. No plagarism folks. One or two recognisable pop culture references are okay.

9. Performers must be prepared to perform two different poems in the heat.

10. In the case of a tie a “slam off” will be used at the discretion of the slam organisers.

11. No musical accompaniment. No props. No costumes. (ie; clothing related to the content of your poem)

12. Two performers with the highest scores in each State Heats will proceed to the State Final

13. Employees of libraries or venues that are hosting heats may not compete.

14. Contestants must sign a copy of the rules prior to performing.

1967 - 46 minutes ago
Yup. Hospital cleaners should be paid more. But, One of the mote concerning tbings in this article is that the drivers are on... View
Acton - 1 hour ago
Why the silence and inaction from the Greens/Labor ACT Govt? Why is this newly elected government doing nothing to resolve th... View
Community 22

Tennis ACT - 4 hours ago
What a great achievement Snedden Hall & Gallop! View
Martyn O'Connell - 17 hours ago
the 333 bus painted up to look like the XPT View
Katy Did - 18 hours ago
I loved that tram when I worked in Civic View
Opinion 16

Rodney Thompson - 6 hours ago
Someone who actually deserves a payrise. View
Opinion 55

Ten things to do around Canberra this Australia Day long weekend