BAD!SLAM!NO!BISCUIT! kicks off the ACT championships 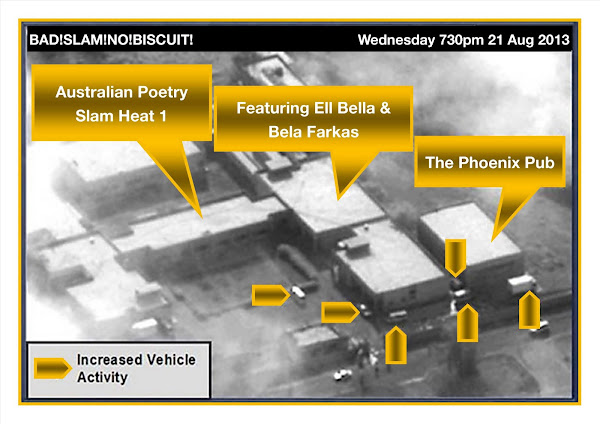 It is also at the Phoenix!

It is double also the first heat in this year’s ACT Australian Poetry Slam championships.

We also have more first prizes than any other poetry slam ever.

We are also the longest running only poetry slam ever, and both the first and the latest poetry slams ever, and whatever else we may decide to claim ever.

Ell Bella
Ell Bella is a Melbourne based MC, street performer, juggler and acrobat. Her solo street shows have taken her around the world and around her home country of Australia. She regularly MC’s at Melbourne’s ‘Variety Collective’, and in her own show Ell Bella’s Late Night Variety Assortment, as well as in a number of one-off events. As a corporate juggler she is one of Australia’s finest, performing solo or with other circus artists.

Bella and Bela are pronounced differently.

Bela Farkas
Serial celebrity name dropper Bela Farkas is a Canberra-based poet. Much of his work has been influenced by popular culture and current events. He has featured at Canberra’s BAD!SLAM!NO!BISCUIT! and the Traverse Poetry Slam at the Font; at West Word in Melbourne; and as part of the ACT Australian Poetry Slam. As part of the Tragic Troubadours Bela has performed at the Corinbank, Canberra Fringe, National Folk, and You Are Here festivals. Recently published in United Kingdom’s The Delinquent Magazine, Bela also has a degree in Public Relations from the University of Canberra.

As BAD!SLAM!NO!BISCUIT! is running as a part of the APS this month, the rules will be slightly different. Here are the new rules.

Tim Hough - 10 hours ago
That's some crazy conditions. I'd only find them borderline acceptable if we were guaranteed a Matildas match, but even then... View
Property 17

dandelion - 14 hours ago
I tried Framing Master in Fyshwick based on some comments here, but can't recommend them. They offer little in the way of cus... View
Business 2

Capital Retro - 14 hours ago
"The last three weeks showed clearance rates of 89 per cent, 80 per cent and 70 per cent respectively, with the number of pro... View
News 44

Rob Thomas - 14 hours ago
Gabriel an Australian politician? Oh he probably is. View
Russell Nankervis - 16 hours ago
Lol a Liberal saying others are killing democracy. How ironic. View
Charlie Church - 17 hours ago
Sheridan New honestly would trade it for anything right now. View
News 4

Acton - 17 hours ago
From the above the eligibility is stated as being a permanent resident of the ACT and not in paid employment for more than 20... View
Property 1

@The_RiotACT @The_RiotACT
The sight of black cockatoos always gladdens Ian Fraser's heart. The sight of the powerful birds munching their way through bark to reach their favourite grubs is remarkable, but did you know that two species visit Canberra? https://t.co/Df0XtWwK7n (58 minutes ago)

@The_RiotACT @The_RiotACT
The Liberal and Labor candidates are neck and neck in Eden Monaro as the vote goes down to the wire and preferences run wild https://t.co/dG673PvvM6 (9 hours ago)