A Banks man released from custody a month ago has been accused of committing fresh crimes. Photo: File.

An 18-year-old man has been arrested after police allege he committed an aggravated robbery, trespassed on a Kaleen residence, and breached numerous good behaviour orders in the month since he was released from custody.

It’s after an incident where two men entered a liquor store in Wanniassa at about 9 pm on Monday, 15 August, and one man reportedly brandished a large knife and demanded cash and alcohol.

It’s alleged the men – who were wearing face coverings – went behind the counter and threatened the shopkeeper before taking off with cash from the register along with 17 packs of cigarettes and 11 bottles of alcohol.

The stolen goods were worth more than $1600.

Then police received a report at about 11 pm on 17 August that a Kaleen resident had spotted an armed duo trespassing on his premises. However, he was able to get rid of them.

Following extensive investigations, officers executed a search warrant at the 18-year-old’s Banks residence on Wednesday (7 September), where he was arrested.

The man has been charged with aggravated robbery, going equipped with an offensive weapon for theft, unlawful trespass on premises, and breach of good behaviour obligations.

Police said the man had only been released from custody on 8 August and was on 10 sets of good behaviour orders when the offences were allegedly committed.

How does one get 10 sets of good behaviour orders? I’d have expected after breaching one, you get no more.

So what? “Rolling Release Rattenbury and the In-Justices” have already said there’s nuffink to worry about. Just go back to sleep and dream of the kale-run tram and fluffy lies and spin ACT voters swallow. And when the committed recidivist eshays do a home invasion in your house and bash your wife or kids as they steal your stuff and car keys, take comfort that those eshays are victims too and Ratts is offering cuddles. 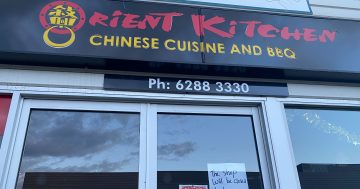 Man taken into custody after alleged stabbing in Chinese restaurant