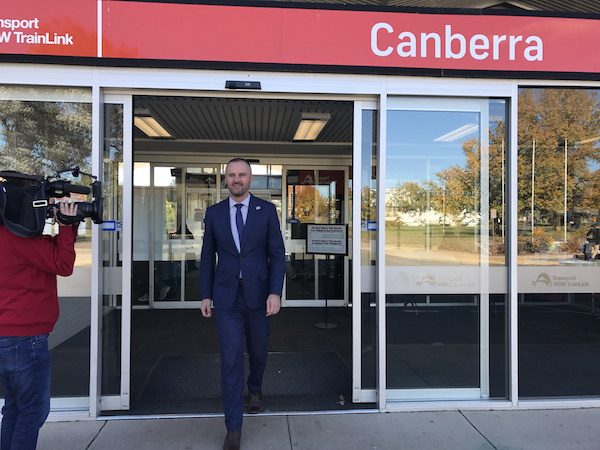 Andrew Barr at Canberra Railway Station for a previous rail announcement. He is optimistic that the NSW funding announcement will make fast rail happen. File photo.

Chief Minister Andrew Barr has called on both sides of federal politics to commit funding to the Canberra-Sydney rail corridor to speed up the development of a faster service between the two capitals after the NSW Government made regional rail a priority for its $4.2 billion Snowy Hydro Legacy Fund.

Deputy Premier John Barilaro identified the Canberra to Sydney corridor as a key one in need of upgrading, saying improvements could cut the current travel time of four and a half hours to under three.

The ACT and NSW have been working together for some time on cutting travel times between the two capitals and the NSW Government announcement of its spending priorities for the proceeds of the sale of Snowy Hydro to the Commonwealth puts funding on the table that would make it possible.

Taking advantage of the looming Federal and State elections, Mr Barr said the NSW announcement to invest in the Canberra corridor was a genuine commitment with real money, and a top-up from the Commonwealth would make fast rail ‘very real and very soon’.

“For the first time in a while, there would be a significant source of funding allocated to track work and to buy new trains, so it’s encouraging. I’ve been pleased over the past six months or so to be able to secure support of both sides of politics in NSW towards the project,” he said.

“So with the state election coming in the first quarter of next year, it does seem that this is a very timely announcement. I hope my Labor colleagues in NSW would be equally supportive of that significant proportion of that $4.2 billion fund being allocated to improve the rail service. It gives us cause for optimism that we might actually get something done here.”

In August, the ACT Government also committed $5 million in matched funding with a future NSW Labor Government to a detailed business case for a faster train service between Canberra and Sydney. NSW goes to the polls on Saturday, 23 March 2019 and the Snowy Hydro Legacy Fund will provide a ready war chest for the Government.

Mr Barilaro told the ABC that NSW was already procuring new trains but a big problem was the alignment of the rail line.

“The tracks themselves, they need realignment, improvements, straightening, new technologies. So if you can improve and invest in that area you will actually reduce travel times,” he said.

But it remains a long-term project and the NSW Government has not forgotten the ambitious High-Speed Rail proposal that will need a separate corridor.

“If anyone says you can have a very fast train from Canberra to Sydney in the very near future well they’re not telling the truth, the reality is we have an opportunity to invest now in the infrastructure we’ve got to improve the rail timeline today but at the same time identify what will have to be a new corridor for the Very Fast Train from Canberra to Sydney,” he said.

A train service that is under three hours will, if priced appropriately, take almost all of the current flight business and a chunk of the current bus business. If that service calls at both airports (I believe Canberra Airport is only too keen to fund a station there), then even more so.

So, the operational business case is compelling, without even mentioning the freight business (which is the real reason why Canberra Airport will throw serious money at this).

The capital business case is of course another matter. It’s my understanding that only electric trains can service the Sydney Airport stations. That doesn’t mean you’d need to electrify the entire line, but it’s a good reason to do so.

There are probably few sectors left in the OECD that are more potentially profitable than this one for a moderately fast train. The only other one in Australia is Sydney Newcastle. That’s a much more geographically-challenging route and also lacks the guaranteed premium government business that is intrinsic to the Sydney Canberra route.

It’s great that both sides of politics in NSW seem to be keen on this. I reckon the ACT government should be prepared to go it alone, regardless. There’s serious money to be made here…

The privately operated direct bus service between Canberra and Sydney takes about 3 hours so who is going spend millions on a rail service to compete with that?

The ACT government is only interested in “urban renewal” near rail corridors so even they wouldn’t be stupid enough to take it on.

And you mention “freight business”. What are you referring to?

Says the bloke who’s just dropped $4 billion on a tram from Gungarlin to Woden.

Maybe see to the timing of the light rail before turning thoughts interstate? We don’t even know when in 2019 the LR is going to start carrying passengers … was supposed to be end November!

Faster, yes – but not too fast. Canberra housing is already very expensive, and barely affordable for many – in that respect we cannot afford to become a dormitory suburb of Sydney.

The Spanish tilt train referred to in another post has disappeared just like the first one that was offered some years ago.

Maybe there are too many windmills along the route.

Call me cynical – but there is an election in March, and statements like this show we are merely in the leadup to the 2019 NSW Election. If the betting odds on Sportsbet are anything to go by, Deputy Premier and Nationals Leader John Barilaro will no longer be in Parliament, and Bryce Wilson will be the member for Monaro.

Lewy Affleck - 7 minutes ago
Omg those lights will be so annoying, that section gets heavy with traffic, plus a tram, plus London circuit wtf View
Monica Tiffen - 20 minutes ago
By the time Woden gets it I may have gone to the Great Library and Art Studio in the Sky!!!!!! View
Claire Sadler - 1 hour ago
Fixed route driverless buses are already operating in other countries. Surely they would,cost a lot less. View
Opinion 6

Mark Goodman - 60 minutes ago
Budget deficits are not a terrible thing, particularly when interest rates are so low and the economy is struggling. The prob... View
Mark Ryan - 7 hours ago
The fiscally responsible thing to do would bevto make a few tough calls by cutting lower priority spending this year and redi... View
Geoffrey John Randal - 7 hours ago
Spending on health and education and public transport is investment in better quality of life in the ACT. View
News 6

Donna Perry - 2 hours ago
Chelle Anne Hood. Can you repost on our page? View
Margreet Philp - 4 hours ago
Ann Kennedy come to the ‘Berra! View
Evonne Deans - 5 hours ago
This is brilliant View
News 5

Greg Batten - 4 hours ago
Huge thankyou to those who stood in harm’s way to protect us from this beast. View
Rob Sanders - 4 hours ago
That's brilliant news View
Aldith Graves - 6 hours ago
Such wonderful news. Thanks to all who fought the monster & the rain View
Entertainment 3

Michelle Gr - 4 hours ago
Keo my experience has been it’s inclusive of uni students mainly who are really drunk. Added to this the venue has poor sou... View
Keo - 7 hours ago
mmm without uc refec, hub and the amazing team at uclive the ACT couldn't reasonably accomodate bigger touring artists and th... View
News 112

Holly Lockyer Bryant - 4 hours ago
They need to do a card collection so all the plastic isn't thrown out! View
Community 15

Anna Kay - 6 hours ago
This is why I stopped donating money to charities years ago. I would rather physically go down there and give a hand. Cook a... View
Property 17

Richard Navakas - 12 hours ago
Russell Frost The ACT greens decided to be at the forefront of solar implementation with massive subsidies for solar panels t... View
Russell Frost - 12 hours ago
Richard Navakas That’s the deal of the Century...... I get 7c for selling my Solar to the Grid, Buy it for 28c per unit....... View
show more show less
*Results are based on activity within last 7 days

A landslide has closed the Snowy Mountains Highway, west of Bemboka, in both directions. Live Traffic NSW reported the incident...
News 85

A new ticketing system is on the way for Canberra's public transport network, promising passengers a variety of flexible payment...
News 85

@The_RiotACT @The_RiotACT
How would you like to learn cheesemaking? At Tilba Real Dairy on the South Coast, now you can https://t.co/WcYQb26QXy (58 minutes ago)