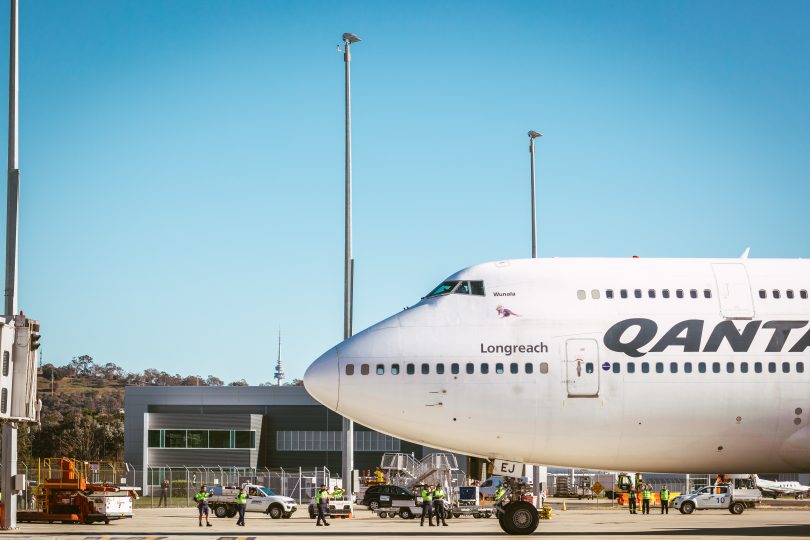 The ACT Government says aviation emissions aren’t within its scope – it’s got enough to do! Photo: Supplied.

The ACT Government won’t be ‘flight-shaming’ people who choose to travel by plane, nor will it seek to tackle the emissions-heavy industry of which it does not have regulatory oversight.

That’s the message from Chief Minister Andrew Barr who accused ACT Greens MLA Jo Clay today (31 August) of running a “pantomime” of the Greens pressuring the government to regulate an area that falls outside its responsibility.

Ms Clay had asked Mr Barr about what action the ACT planned to take to reduce aviation emissions, referencing European countries which were seeking to move to battery-powered planes and banning short-haul flights.

“Our progressive government has taken quite bold action on climate action. We’ve just launched a transition plan for getting off gas, and, of course, no one says turn off your heater tomorrow, but we’ve got a clear plan,” she said.

“We’ve also got a plan for ICE [internal combustion engine] cars … but what I’ve heard today is that the only plan you have for aviation is to encourage it as much as possible. How does that sit with your role as climate action and economic development minister?

“From what I’ve read today, your only action is to encourage aviation as much as possible,” she said.

“I reject the argument that this industry, like any other, cannot take the time that’s necessary to reduce its emissions,” he said. 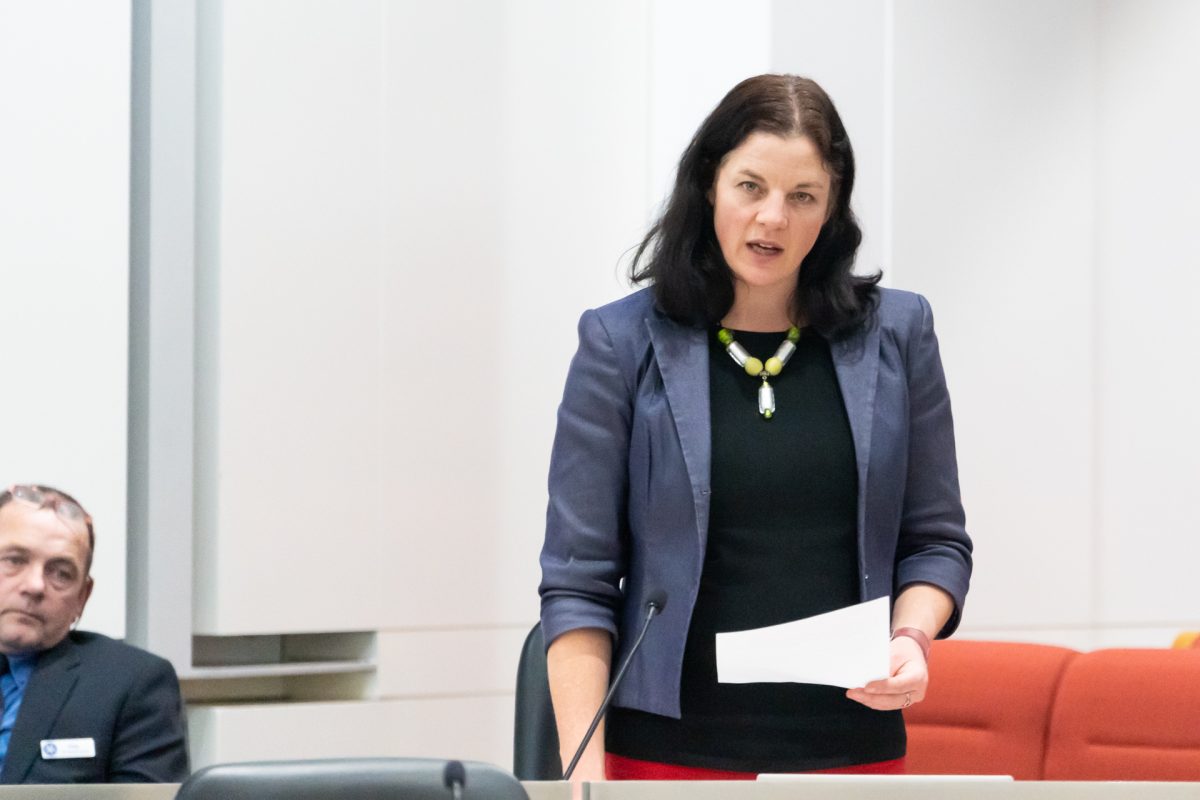 The Chief Minister sought to “kill the issue once and for all”, saying he was not interested in either grand-standing or gaining traction on social media given the Territory government did not have regulatory oversight of aviation.

“I just need to be absolutely crystal-clear, as I have been previously, that I’m not going to flight shame anyone,” he said.

“We are seeking to grow our aviation industry and [it] is becoming more sustainable in itself.

“Does it need to continue that journey? Yes. But it’s part of a national framework and I certainly do not want to send the signal that the ACT is going to arbitrarily seek to ban aircraft landing at Canberra Airport. One: we can’t. And two: we won’t.”

Flight-shaming is an anti-flying social movement that aims to reduce the environmental impact of aviation.

Instead, Mr Barr said the Territory had enough emissions-reduction issues of its own to focus on and he would not advocate for diverting ACT public sector resources away from those and into a problem that would be better managed at a national and international level.

He said he was comfortable that the trend in aviation toward lower emissions was happening at a quicker rate than in other industries, largely driven by the high cost of aviation fuel.

“We know what we’ve got to do to get to net-zero emissions by 2045 and we’ve set out a massive work agenda to get there.” 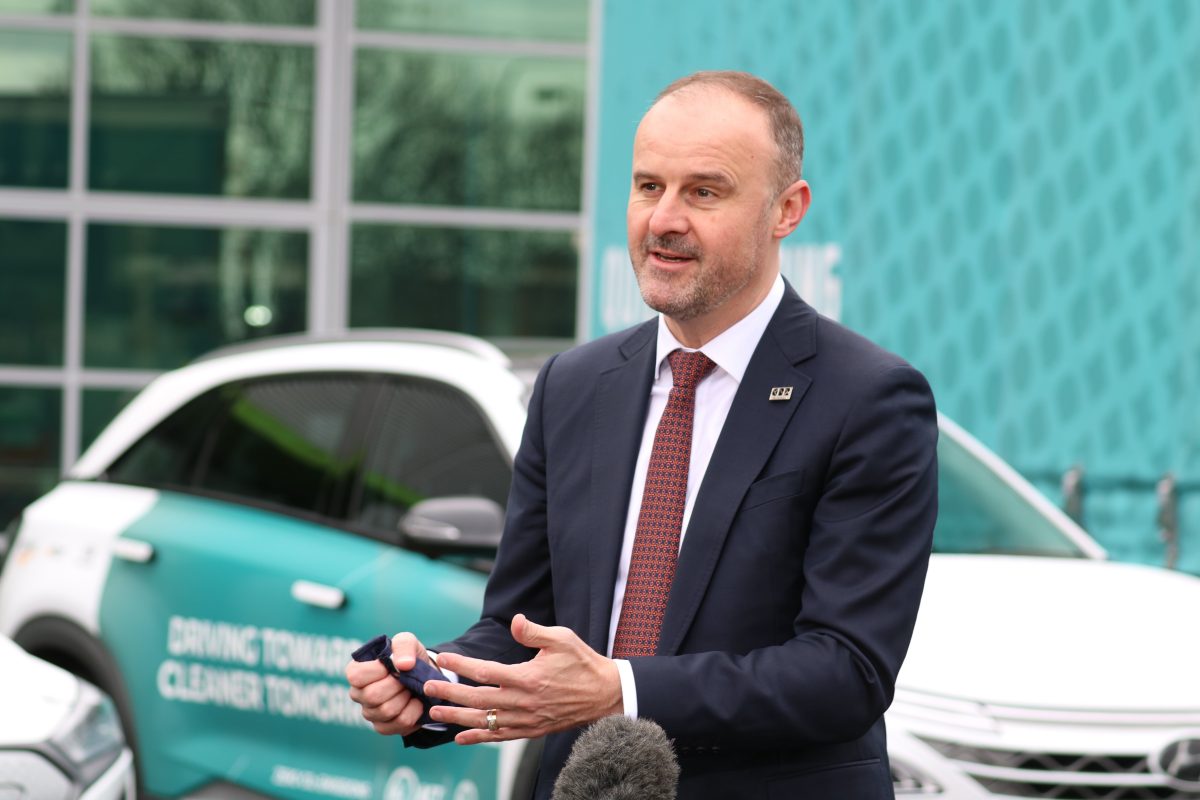 Chief Minister Andrew Barr said the ACT must focus its resources on its own emissions and leave the aviation industry alone. Photo: ACT ESA.

Mr Barr told the estimates hearing the government wants to expand the number of routes from Canberra, and “quite a lot” of work was underway both domestically and internationally.

There are 13 available currently compared to seven pre-pandemic, but Mr Barr said the government had “ambitions to add a few more to that list [including] some more regional NSW destinations, some further regional Queensland destinations, hopefully, one or two additional regional destinations in Victoria and Tasmania,” Mr Barr said.

“I’d also like to see some more competition on Canberra-Adelaide and Canberra-Perth.”

The Chief Minister has only recently returned from an overseas trip to Singapore where Singapore Airlines restarting its Canberra route featured heavily as a topic of discussion.

He said the carrier was keen to restart its direct service to Canberra once its international network is rebuilt following the pandemic.

Qatar will resume international flights in October while the government continues to work with New Zealand and Australian carriers to look at Trans-Tasman routes and Pacific airlines for Pacific connections.

Mr Barr said the government would not underwrite airlines, but it would partner with them on the marketing and “risk-reduction” upon the establishment of new routes.

Surely this can’t be the same Andrew Barr whose government patted itself on the back for being the first Australian state or territory government to declare a “climate emergency” just three years ago?

But of course it is – the apparent contradiction between that declaration and the condoning and promotion of air travel is only a contradiction if you overlook the fact that the declaration and most of the “climate action” taken by this government are primarily political gestures designed to ease the consciences of people who, among many other things, regard discretionary air travel as a birthright.

Some great ideas for emission free “active air transport” that the Greens can implement:

Greens-shaming. Good on Barr for exposing their collective stupidity, immaturity and irrationality.

Meanwhile, Canberra is directly below one of the busiest airline routes in the world and this is what goes on: https://www.transportenvironment.org/discover/airline-contrails-warm-planet-twice-much-co2-eu-study-finds/

Two things never mentioned as targets for the hypocrite warmists in reaching zero emissions are closing the airlines down (5% – 10% of all greenhouse emissions) and the free-for-all that China gets as the largest emitter in the world.

Yaaaaaawn it’s drama queen backbencher Jo Clay again. All that confection looking for an issue so she can try to be a relevant Green! I’m glad to see Andrew Barr put her in her place!

Maybe the ACT Govt should legislate world peace too 🤦‍♂️ Focus on fixing the roads and bail laws, and leave aviation regulation to the experts….

So when does the ACT start building a bubble to keep all those impurities out. Will it be operational before the tram is finished.

Omg the crazy Greens are going to come after air travel.Is there anything they won’t try to ban? The world has gone mad

When is the ACT going to co-operate with NSW and Victoria to fund the HST on Australia’s busiest air corridor- Sydney to Melbourne.
Imagine an hourly express service from 6am to 9pm. 3 hr journey time.
Straight route, city centre to city centre.
Huge reduction in fuel emissions.

Air travel is less intensive than a single person in a car, or even a battery car for that matter… Fuel per person, per mile is much lower in heavy jet travel, do the Greens not even understand the basics..?