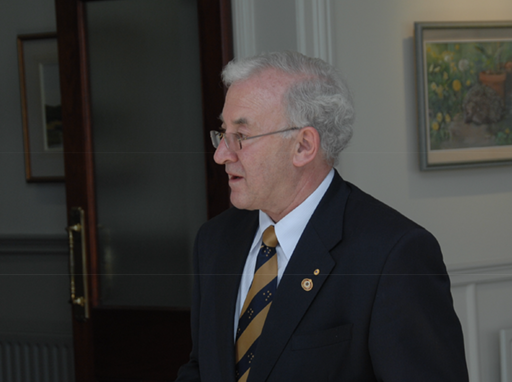 Terence Higgins: the Canberra Liberals have rejected his nomination as Integrity Commissioner because of Labor Party membership nearly 30 years ago. File photo.

The establishment of the ACT’s anti-corruption body has been set back by the Canberra Liberals’ scuttling, for apparently political reasons, of the nomination of former ACT Chief Justice Terence Higgins as the Territory’s first Integrity Commissioner.

“This will set back the process of appointment. It really is a question for the Opposition why they have disregarded the legislation and the process and made the decision they have,” he said.

“They will have to go back and do a process again. It will cost taxpayers a lot of money and it will cost more presumably to satisfy the political lust of the Opposition.”

The ACT Integrity Commission had been expected to start work from 1 July 2019 but Mr Barr said the Liberals’ decision would now mean an expensive delay.

A panel of three judges had nominated Mr Higgins, who was a member of the Labor Party, branch president and served on its National Executive between 1986 and 1987. He resigned from the party in 1990 when he became a judge of the ACT Supreme Court.

The nomination needs to be supported by two-thirds of the Legislative Assembly.

The legislation says that the Commissioner must be a judge or a lawyer for 10 years but cannot have been a member of a political party in the previous five years.

But Opposition Leader Alistair Coe appears to have redefined the selection criteria for the position, now saying that past presidents of any political party are not appropriate to be the Commissioner overseeing politicians and public servants.

“The inaugural Integrity Commission needs to be beyond reproach,” Mr Coe said.

“We must seek to avoid actual, potential or perceived conflicts of interest – I don’t think that this is too much to ask.”

Mr Higgins retired from the ACT bench in 2013 at the age of 70, but in 2015 was appointed a judge of the National and Supreme Courts of Papua New Guinea.

He was among the five Justices of the Supreme Court of Papua New Guinea who unanimously ruled that the Manus Regional Processing Centre breached the PNG constitution’s right to personal liberty, and was thus illegal.

ACT Greens leader Shane Rattenbury said he was dismayed that the Canberra Liberals would take such a hyper-political stance on this appointment.

“The appointment was recommended by an independent panel led by Ken Crispin, who is the independent Standards Commissioner for the Legislative Assembly.

“As the Greens, we are aware of Mr Higgins membership of the Labor Party nearly 30 years ago, but we considered his extensive judicial experience, including more than a decade as Chief Justice of the ACT, to be more relevant.

“If the Liberals are prepared to be this vindictive on appointments, it makes you wonder what would happen if they ever became the government.”

A spokesperson for the Speaker, Joy Burch, said the selection process was ongoing and the appointment to the position of Commissioner could only be made through a successful passing of a motion in the Assembly.

The Speaker had determined that this motion would only be brought forward once two-thirds of the Assembly had provided their support for any proposed candidate.

I started reading this story all set to be outraged at the Libs.

Then I saw it was Higgins being proposed.

Please please do not let Higgins have anything more to do with justice.

He did too much damage when he was a Chief Injustice. It was a great day when he finally retired.

It’s hard to see this veto as reasonable after so long as a judicial officer. It’s insulting really

Get someone unknown from the Sydney or Melbourne Bar.

They are nasty take after that smirky poor excuse for a Prime Minister!

Perception of wedge politics in nominating Terry H, was always going to fail He’s done a lot of great work in the ACT – but why put him in the position where his previous Labor Party membership would always be raised and his integrity questioned in any politic matters covered by the Integrity Commission – sigh 😔

And so it should be!

According to this article Mr Higgins handed in his Labor party membership twenty nine years ago. There was no objection to Mr Higgins sitting on the bench here in the ACT for decades and then he was called out of retirement to become a justice of the Supreme Court of Papua New Guinea. I don’t believe Mr Higgins’ old Labor Party membership twenty nine years ago was a problem in any of the positions he has held. Mr Higgins has served the ACT and Papua New Guinea without any political affiliations, and most certainly with the highest degree of honor. The people of Canberra are the true losers for this dreadful and spiteful political decision.

Mr Barr’s impatience to have complete control is evident , and his response is week and revealing, using the basic line that it will cost more money , since when is money more important than a just process, it is HIS anger of things not going his way that is on display here.

This will always be a problem. The political skew of public officers. As happens in the United States with their justices on the Supreme Court. They are political appointments, charged, with providing a balanced decision. Largely they do, however, their political bias does come to play.

In this country the threat is real also. Generally though, you do get a balance, however, as this candidate was a fully paid card carrying member of The Party, and the Commission would undoubtedly be in its earliest onset, investigating The Party, it’s activities, it’s direction and handling of public offices, there is a very real risk of bias, though, I’d say limited.

The commission needs to be a full board drawn from the pool of legal sharks, and other reputable persons, with no involvement in the government of the day. They need to be agreed upon, by both government and opposition parties.

Jason Preston I agree. There needs to be absolute transparency. I am not questioning Justice Higgins’ impecable career and judgment but it is about perception and could bring into question any decisions made by him.
For those criticizing, imagine if it were the other way around?

For me it’s not so much that he was a member of the Labor Party, but that he had been president of the ACT branch of the Labor Party. The primary task of the Integrity Commission is to ensure our politicians don’t overstep, and having held such a high position in one party, there could easily be a perception of ideological bias when it comes to investigating another party. I wonder how Andrew Barr & Shane Rattenbury would feel if Gary Humphries was nominated?

Can’t wait to hear who Canberra Liberal’s find “beyond reproach”. Sure hope they do their homework! 😂

While I can understand why there is opposition to his proposed appointment, it is almost 30 years since he was a member of a political party – that is a long time in any book. Since then he has had a long and distinguished career in the court system, and I don’t see any evidence of any major controversy through that time….

Who were the three judges who nominated Higgins?

Surely their wisdom combined could see that this would happen.