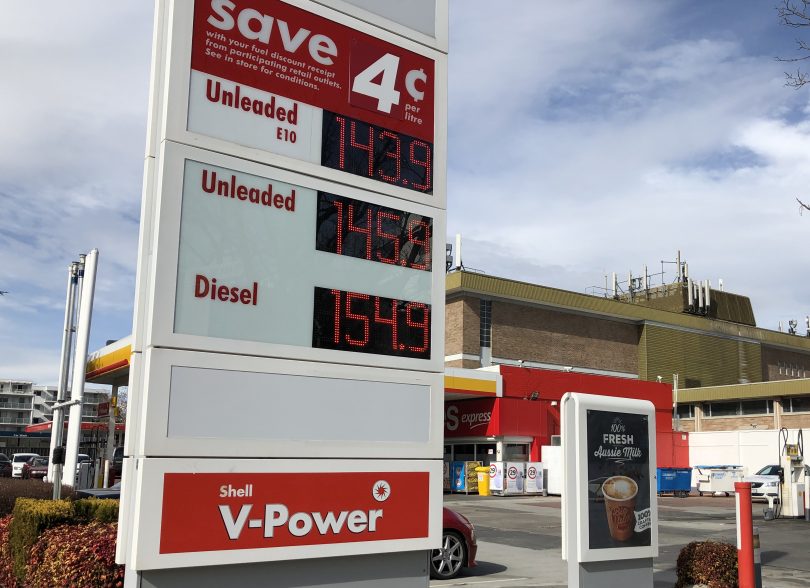 The fuel inquiry has had the right effect on petrol prices and now the Chief Minister wants to see some pressure on other sectors. Photo: Lachlan Roberts.

The ACT Government has vowed to shine a spotlight if not blowtorch on other examples of price gouging in the ACT just weeks out from a parliamentary committee handing down its report into the Territory’s high fuel prices.

New Special Secretary to the Chief Minister and chair of that inquiry Tara Cheyne, who will reveal the report’s recommendations on 17 September, has been given the job of taking up the cudgels on behalf of ACT consumers in other areas where they believe they’re not getting a fair go.

Chief Minister Andrew Barr said the fuel inquiry had been instructive and showed the value of exposing market behaviour to the light.

He said other sectors worthy of scrutiny were telecommunications, including the impact of the 5G rollout on internet coverage, and supermarkets, where ACT stores have always figured prominently in the highest grossing tables.

“I would not necessarily be commissioning ICRC [Independent Competition and Regulatory Commission] reports into every single element but that the experience of the parliamentary committee deep dive [into fuel prices] has been to see some quite significant downward pressure on prices,” he said.

Mr Barr said he had been receiving briefings on the 5G rollout, which he said might supercede the NBN’s capability in some parts of Canberra.

“We have quite a divergence in the ACT around fibre to the home and people who are relying on multi-modal technology,” he said.

He said supermarkets, competition, and players such as Aldi challenging the Coles-Woolworths duopoly was important but so was the media spotlight.

“A bit of competition doesn’t go astray but equally just highlighting, just getting the media coverage and attention on these things has seen some better behaviour,” he said.

Ms Cheyne said she wanted to hear from as many Canberrans as possible about what many have called the ‘Canberra tax’ people pay in the ACT, which has the highest average earnings in the country and seen as fair game.

“That’s where I really see that role, being a voice for them and a voice to the Chief Minister on where they think they’re not getting a fair go,” she said.

There’s plenty of reports – over a number of years – pointing to the high costs of ACT Government services compared to other jurisdictions, something which many Canberrans will be thinking of with 2019-20 Annual Rates Assessment Notices now looming large in the household budget.

Amanda Evans - 6 hours ago
If only I had one, I would.... View
Steve N Carol Trute - 9 hours ago
Marko Lehikoinen agreed and into the CEOs pockets 😡 View
Marko Lehikoinen - 10 hours ago
This is why I haven't given anything to these "charities", I know most of the money will go into investments for 12 months, t... View
Food & Wine 18

Kate Sullivan - 7 hours ago
Lisa Couacaud it does! But I’m a lousy day drinker! View
Fiona Whitesen - 10 hours ago
Simon - he who is not on Facebook will be happy. 😆 View
Simon Fenton - 11 hours ago
Fiona Whitesen 👍 Elmwood posse outing 😂😂😂 View
Community 6