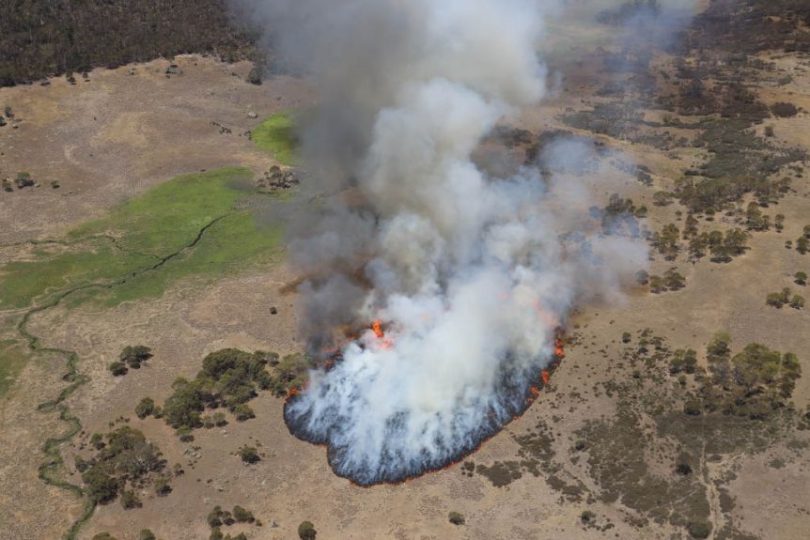 A photo of the start of the Orroral Valley bushfire taken from the helicopter which accidentally started the blaze on 27 January, 2020. Photo: Department of Defence, via ABC.

ACT Chief Minister Andrew Barr said the ACT will not engage in an “endless, circular blame game” with the Australian Defence Force (ADF) over the Orroral Valley bushfire after new images of the nascent blaze came to light on 21 January.

Pictures taken by the crew aboard the MRH-90 Taipan, which accidentally sparked the Territory’s worst bushfire since 2003 due to a faulty landing light, were released to the ABC under Freedom of Information laws. They reveal the damage the helicopter suffered as it scrambled away from the fire on 27 January, 2020.

Questions about why the helicopter crew could not radio in the location of the blaze – which went unreported by onboard ADF personnel until they landed at Canberra Airport 45 minutes later – have also resurfaced.

Mr Barr said he is not interested in “witch-hunts about Defence personnel”.

“The only value in all of this, aside from a bit of media interest and potentially a witch-hunt against a couple of Defence Force personnel, is whether there are any lessons that can be learnt around the operation of that sort of equipment in a bushfire scenario.” 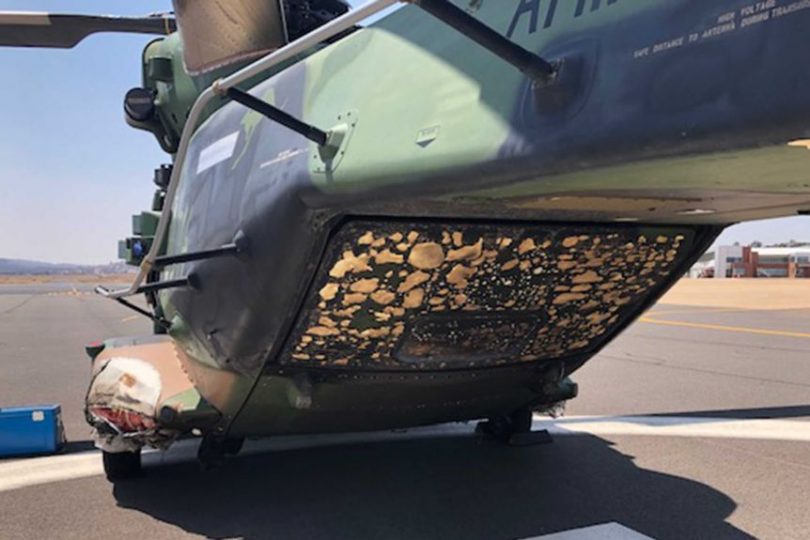 The damage sustained to the helicopter that accidentally ignited the Orroral Valley bushfire. Photo: Department of Defence, via ABC.

Mr Barr said what happened was an accident.

“We can learn from them, but we are not going to do ourselves any service and undo anything that has happened by having this endless, circular blame game,” he said.

“It does not achieve anything; nothing at all. There are many, many other things [the ACT Government] has to focus on at the moment … not offering endless commentary on things that happened a year ago that has absolutely nothing to do with the ACT Government.”

An ACT Justice and Community Safety Directorate spokesperson told Region Media in December 2020 that the government had commenced a claims process through its own insurers with the Commonwealth’s insurers.

A Defence spokesperson said the helicopter crew called in a ‘PAN-PAN’ – a radio broadcast that signifies an urgent situation but does not pose immediate danger to life – relaying the “inflight emergency situation” to Canberra Air Traffic Control and their higher military commanders.

“Addressing the potentially catastrophic risks to crew and aircraft was the crew’s immediate priority, and the focus of their radio traffic during the flight to safety,” said the spokesperson. “Notifications were made as soon as was reasonably practicable.” 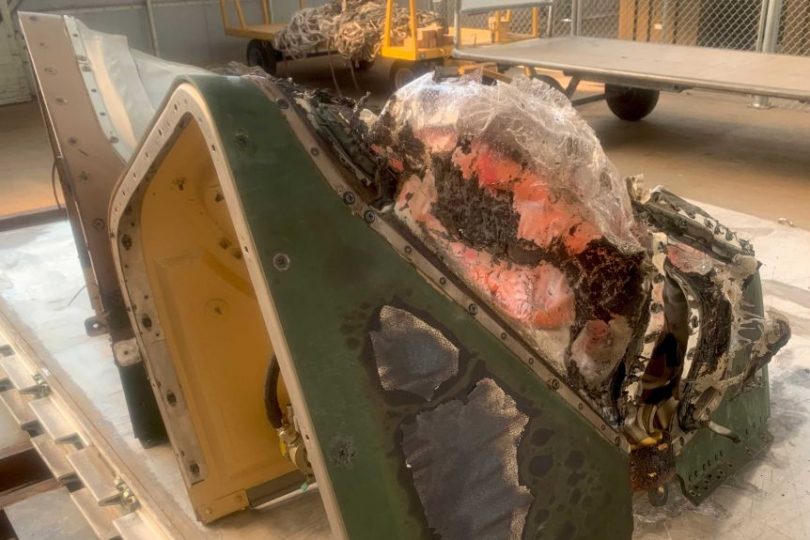 A damaged piece of the helicopter that accidentally ignited the Orroral Valley bushfire. Photo: Department of Defence, via ABC.

The person taking the photos was an Australian Defence Force member who was not part of the aircrew, said Defence.

“Passengers do not have means of external communication to air traffic control or civil emergency services while aboard an aircraft,” said a Defence spokesperson.

“Only the aircrew are on external radio nets while in flight.”

Defence did not answer questions about why crew members could not have relayed the fire’s location during the 45-minute flight to Canberra Airport.

It took ACT Emergency Services 17 minutes to spot the smoke from the bushfire from the Mount Tennent fire tower before the location was finally confirmed by a spotter aircraft around 48 minutes after ignition, by which time the fire had grown significantly.

The bushfire burnt 78 per cent of Namadgi National Park and 22 per cent of Tidbinbilla Nature Reserve, sparking the ACT’s first state of emergency since 2003.

Didn’t the defence department already appologise for this? (Even though they were assisting the RFS at the time)
Didn’t they also supply 100’s of thousands of dollars in staff for clean up as well as quite a few million dollars to the ACT gov?

All this after an ACCIDENT while assisting the RFS!
It was an accident!!!!!

Lets move on ppl and work how to prevent/reduce the risk in the future!!

Why can’t the ADF simply state that they made a mistake.

Here is the proof that the ADF was “working closely with ACT ESA” at the time of the incident.

So, I ask the question again, why didn’t the ACT ESA call in the fire?

A mistake is questionable – using a very hot light under those conditions suggests a lack of forethought or understanding of conditions.

Lack of faith in politicians and democratic accountability is fueled by the language CM Barr uses to disparage reasonable questions. Yes mistakes are made, but I cannot imagine that the pilots were not thinking that they should be reporting the ignition. There is a problem when protocols preclude flexible responses to unforeseen events. If a person was using machinery or doing something that would cause ignition of flammable material they would probably be charged. Using a landing light as they did does seem to fit within this category.

Unless there’s a nice little quid pro quo coming up for the ACT in the next federal Budget (dream on….), this outbreak of “let’s move on” reasonableness is a bit like the dog that didn’t bark in the Sherlock Holmes story.

There doesn’t need to be a witch hunt, but an acknowledgement of the fact that 45 minutes and an exact location of the fire would have made the world of difference to containment is important. Perhaps a different protocol needs to be applied in future when Defence personnel actions do spark bushfires, especially as this is far from an isolated occurrence.

I don’t often agree with Mr Barr, but I do on this. Accidents happen, mistakes are made, humans err or just bad luck. Let it go.

I was of the understanding that the helicopter was meeting with ACT ESA people for a media event so if that was the case wouldn’t they have called it in?

No one has contradicted my claim so far so, am I correct? The aircraft was clearing landing sites in liaison with ACT ESA as part of supply strategies in the event of a bushfire so ACT ESA would have been fully aware what was going on.

Also, that photo says it was taken “at the start” of the Orroral Valley fire but that isn’t credible because it has already covered at least 100 acres. It would appear then that the aircraft lingered at the scene for some time which needs explaining.

What about the people who lost their livelihoods and houses as a result of this fire?

Somehow I thought if you burnt down 80% of a national park someone may get in trouble. Or at least investigated further

Someone has to be accountable for their actions or lack of it. 😠

Robyne Mitchell well that would be the ADF- so it’s Scotty.

Kris Doph 2003 fires was caused by a lightening strike. The fire started in NSW and the NSW RFS left the fire to burn until it was too late to contain.