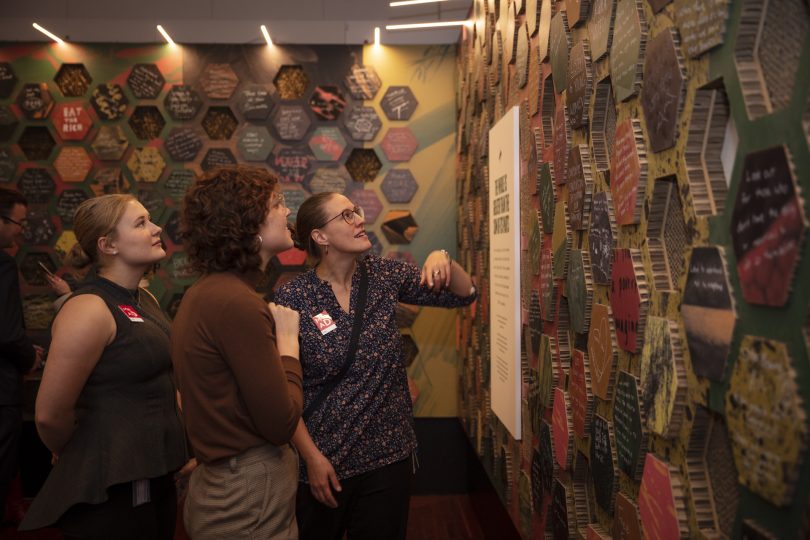 The hexagons are the exhibition’s interactive element. Photo: Thomas Lucraft.

They are two things that we don’t often think about together, but the Museum of Australian Democracy’s newest exhibition – HiveMind – proves that democracy and bees have a long relationship.

MoAD’s latest addition is on display now and combines the fascinating tale of beehives and bee-keeping at Parliament House (old and new) with the democratic tendencies of bees themselves.

According to MoAD Director Daryl Karp, the journey to this exhibition has been serendipitous.

“Around the same time, Professor Tom Sealy had published a book about the democratic tendencies of bees,” she explained.

What can bees teach us about democracy? A new exhibition 'Hivemind' at Museum of Australian Democracy at Old Parliament House reveals the humble honeybees' democratic ideals.

William Yates, a Liberal backbencher in the ’70s, is credited with introducing bee hives to Parliament through a bit of trickery.

On the first of April, the story has it that he asked Speaker Billy Snedden if he could bring the bees to the grounds. The Speaker, believing it to be simply an April Fools prank, agreed.

William Yates’ son Peter Yates said his father then proceeded to set the hives up in the grounds a few days later, much to the shock of the rest of the politicians.

“All the family is so proud of Dad and his work for democracy, but also his passion for bees and bee-keeping,” he said.

HiveMind was launched on Tuesday, 18 May, ahead of World Bee Day on Thursday, 20 May, with a panel discussion between award-winning journalist Jan Fran, Peter Yates and current Head Beekeeper of Parliament, Cormac Farrell. A moving Welcome to Country was also given by Ngunnawal elder Wally Bell. 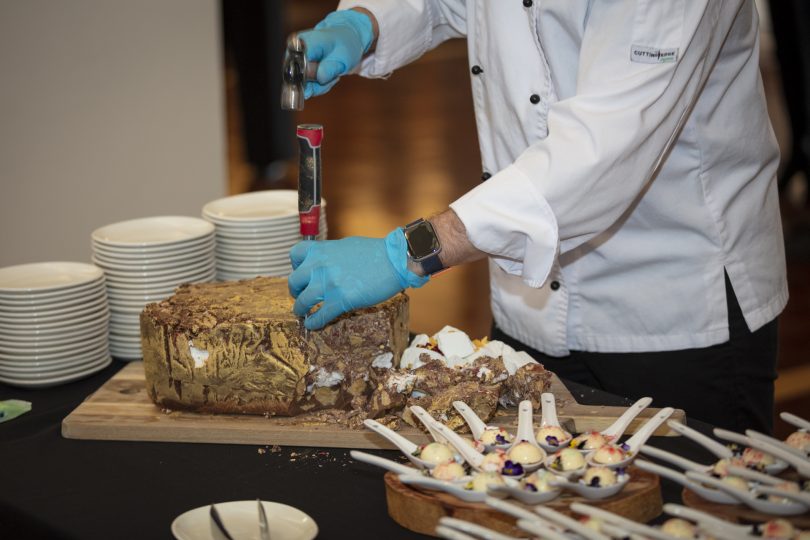 Treats made from Parliament House honey were also on offer. Photos: Thomas Lucraft.

These days, it’s Mr Farrell, a botanist and forest ecologist by trade, who looks after Parliament House’s beehives.

“My own interest in beekeeping began quite simply when one of our apricot trees wasn’t fruiting as much as we’d like so we got some honeybees to help. That was 10 years ago now, and I simply haven’t looked back,” he said.

When it comes to democratic processes, Mr Farrell said bees can be brutally efficient.

“They vote through a kind of wiggle dance in the dark and it’s a pure democracy – so no grumpy backbenchers. Once a decision is made, the colony will act, and this includes replacing the queen. This they do either through the cuddle death where they crush her and cook her or by cutting her wings off and throwing her out.

“We are a bit less brutal, but we can pick up from bees the fact that the sum of our parts is greater than our whole,” he said.

History curator Alex McDermott says along the way some pretty interesting gems came to light, such as the story of Tom Pettifer and his son, Jack.

Tom worked in Parliament while it was still in Melbourne, and when it shifted to Canberra, he followed it, eventually becoming the Housekeeper, which was a live-in role.

“While the rose garden is being planted officially, Mr Pettifer – a keen beekeeper – is quietly starting up a couple of hives,” Mr McDermott said.

Mr Pettifer’s son, Jack, who grew up at Parliament House, ends up coming back there to work later on.

“Who should Jack meet during his time at work other than William Yates?”

Jack is credited with telling Mr Yates about these original hives.

When asked what he’d like visitors to the exhibition to take away, Mr McDermott says that he’s still astounded that honeybees have actual democratic processes.

“Democracy, when it’s done right, is the best way that humans have found to live together well and to make good collective decisions – just like bees,” he said.

Visitors to the exhibition are also invited to provide their own contributions to the ‘HiveMind’, a piece of public art from Enlighten 2020 showing democracy in action. 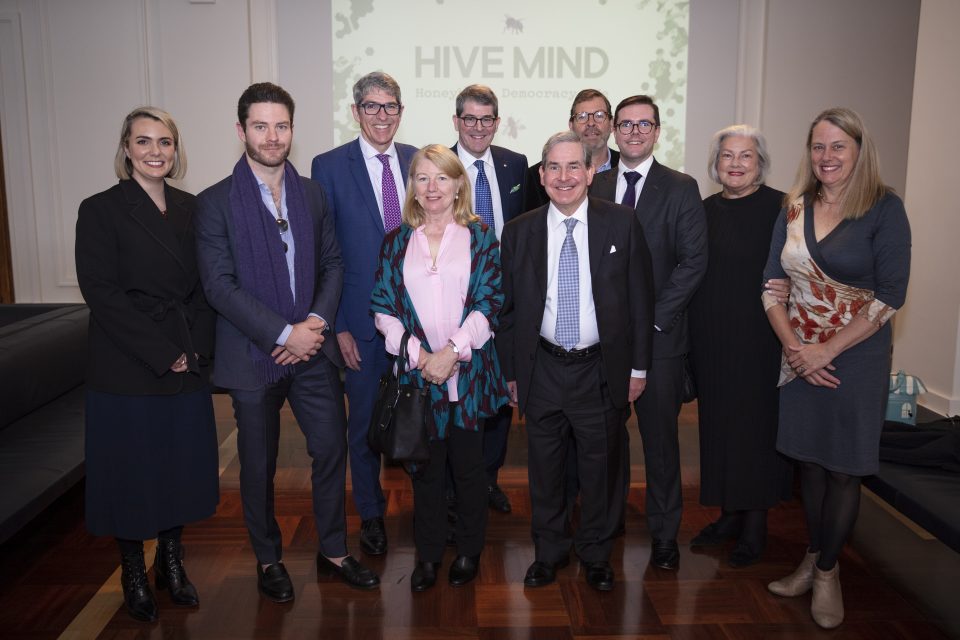 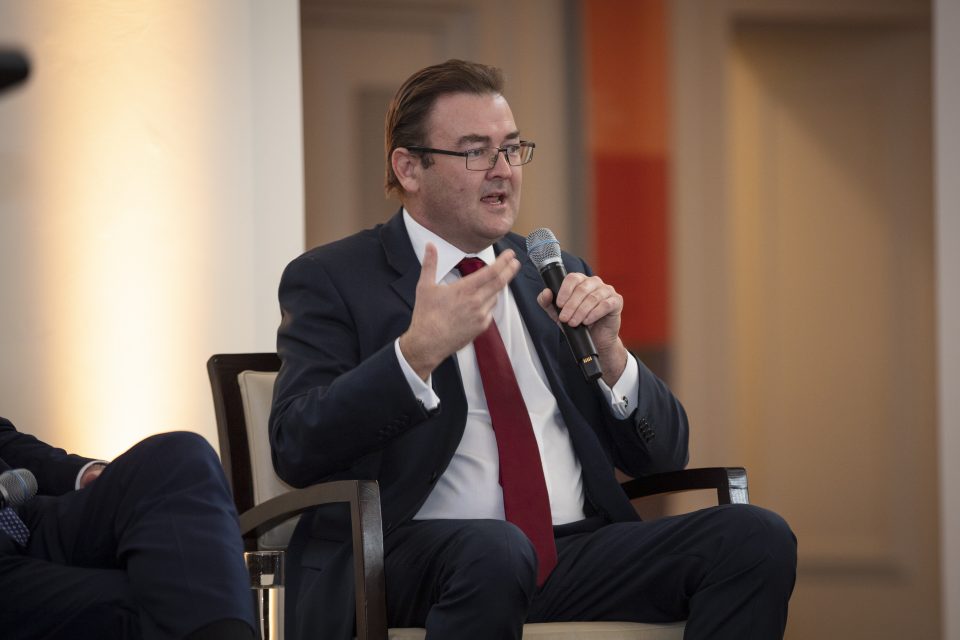 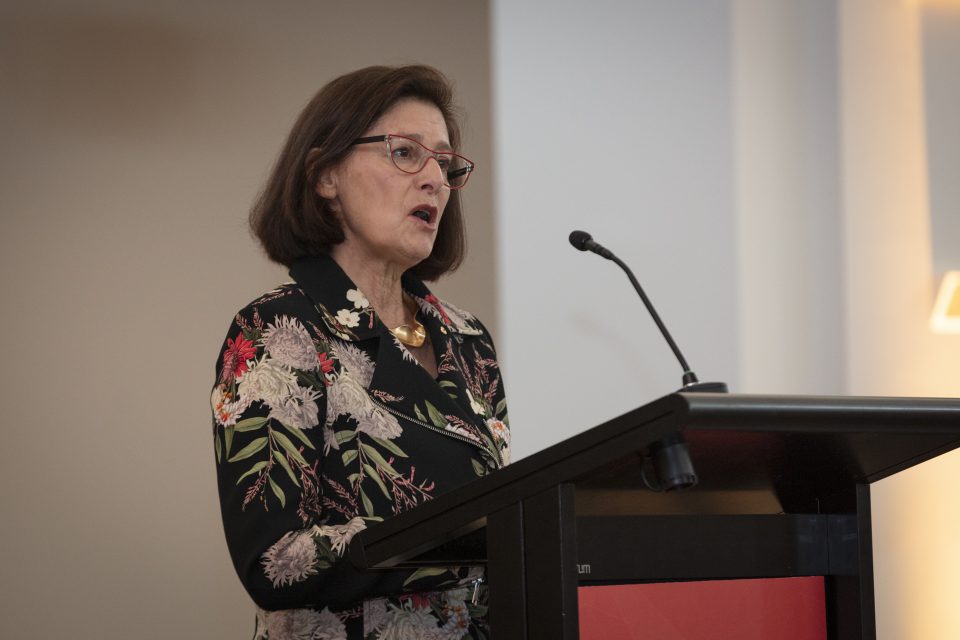 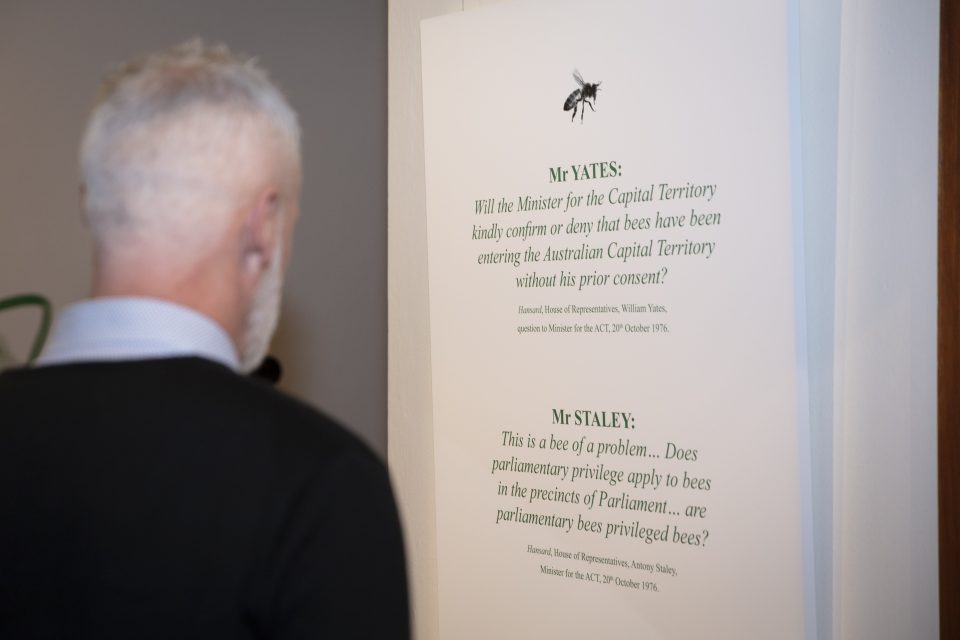 Visitors at the exhibition. 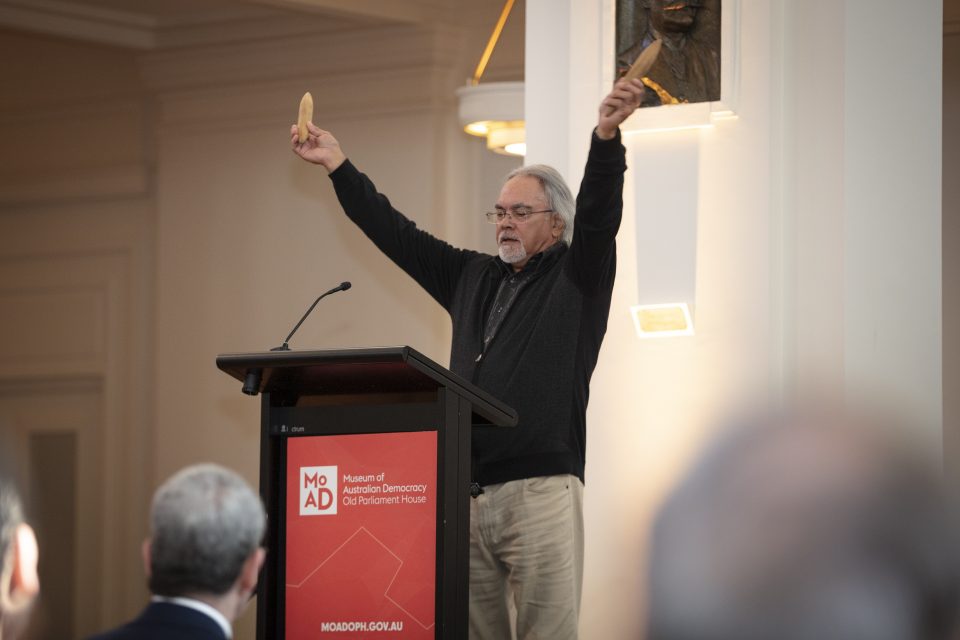 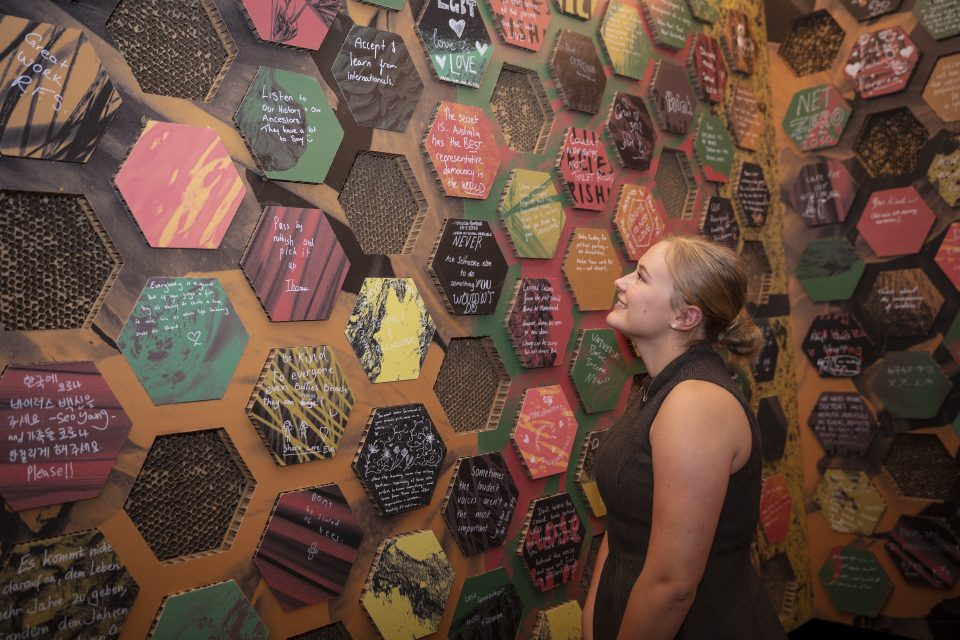 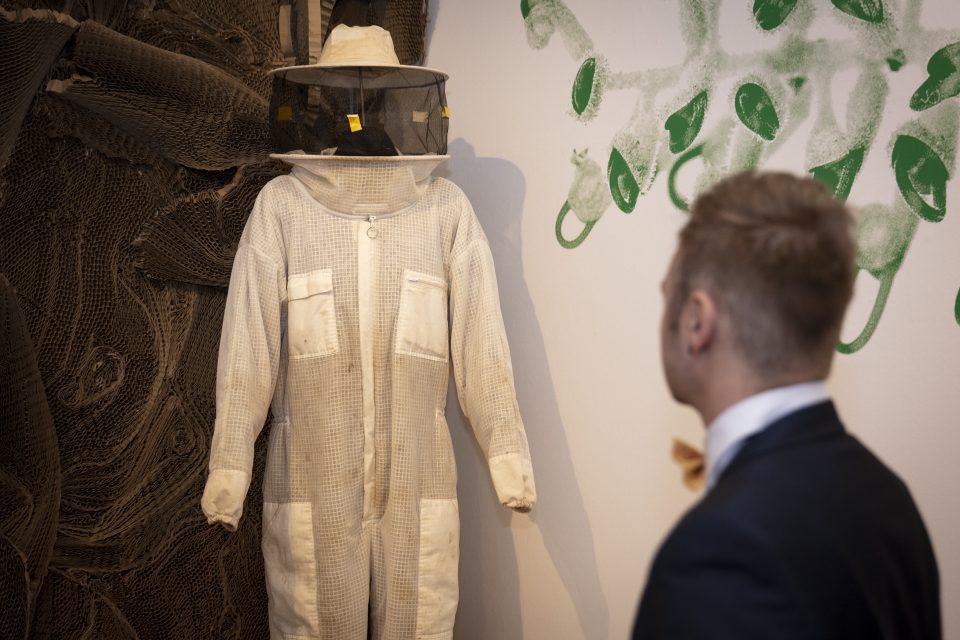 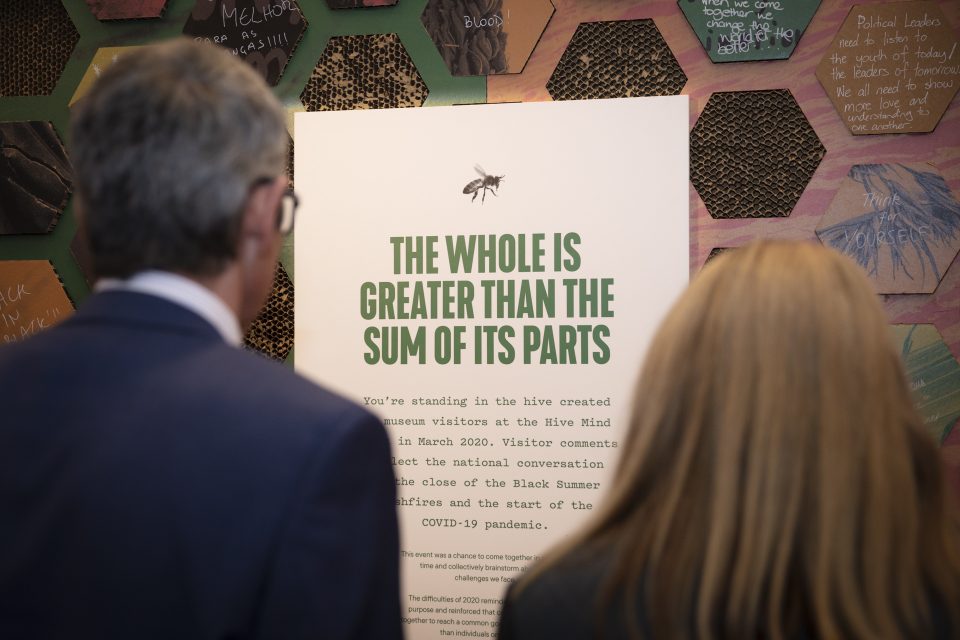 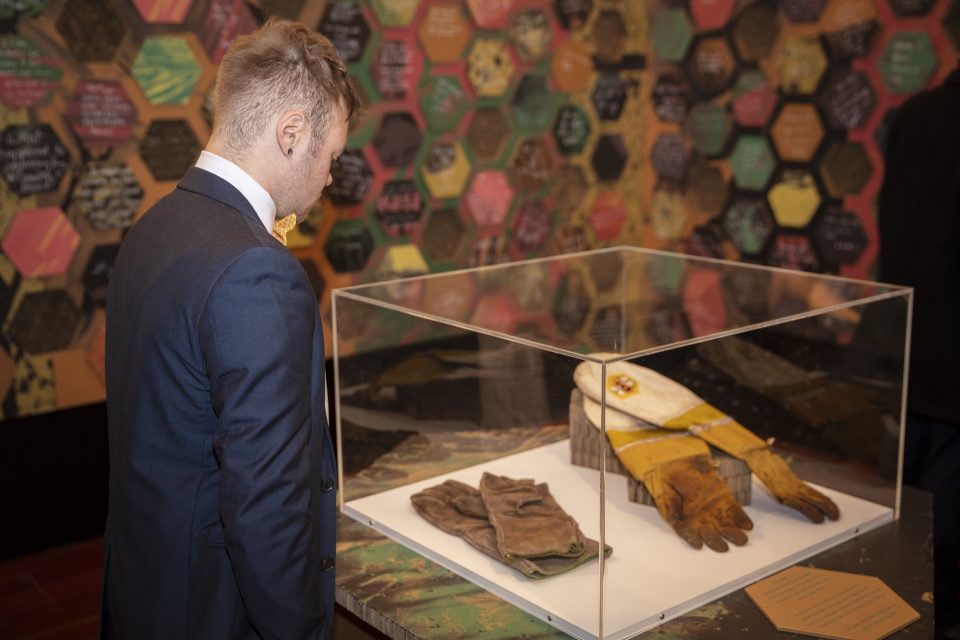 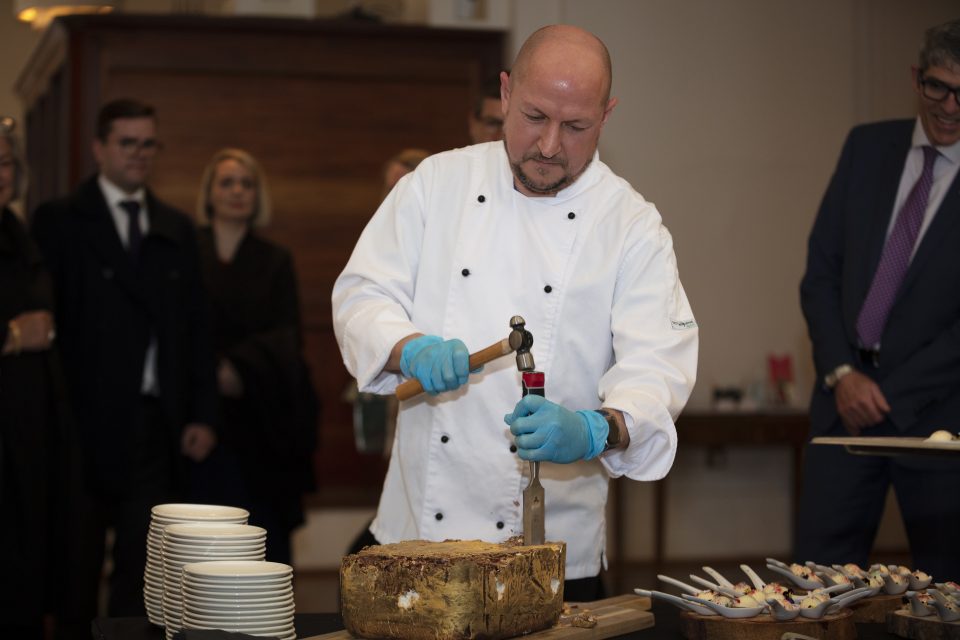 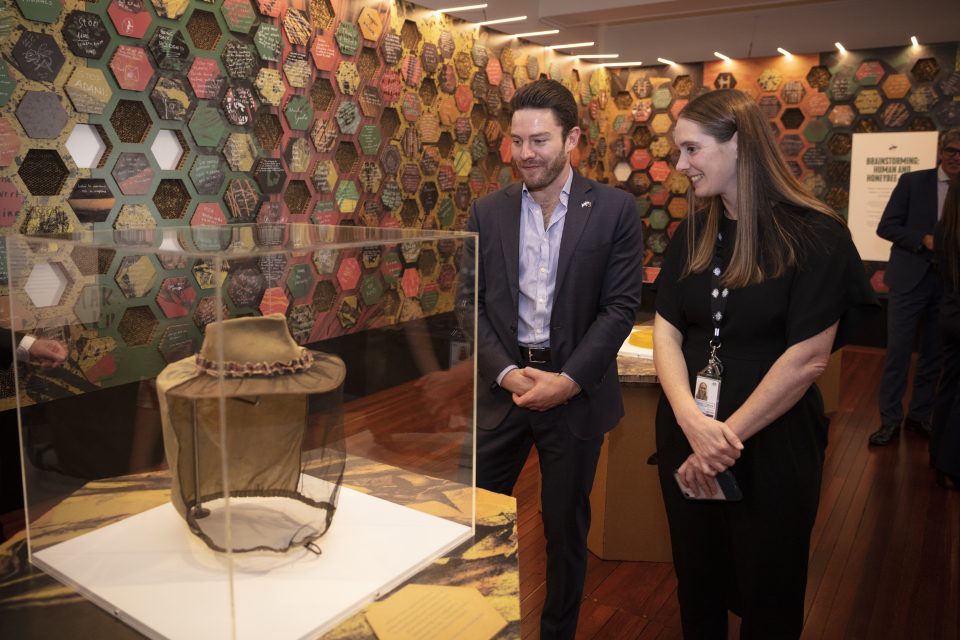 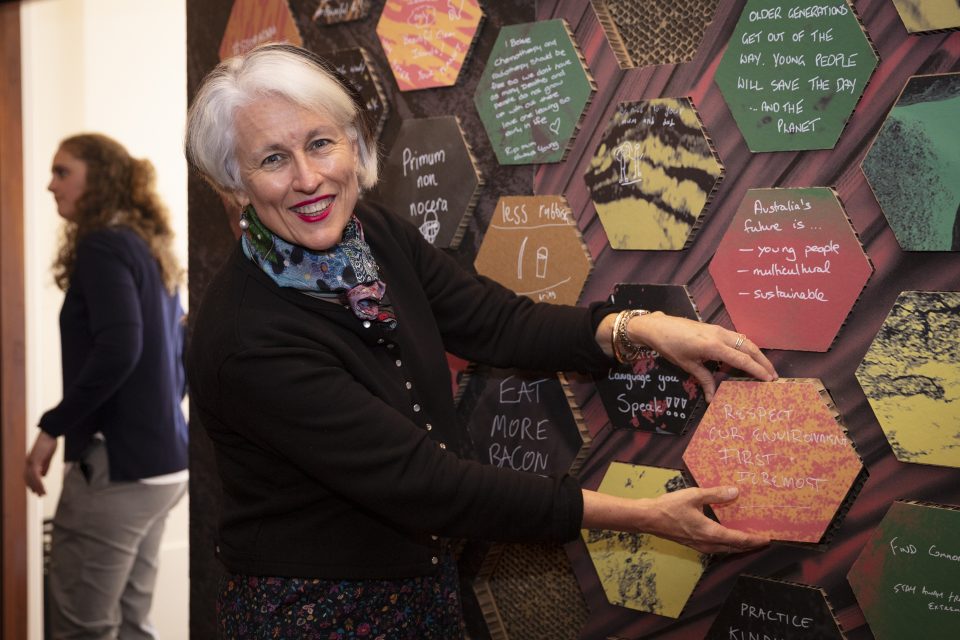 HiveMind: Honeybees, Democracy and Me is now open to the public at the Museum of Australian Democracy, Old Parliament House. The exhibition is free and is open daily from 9:00 am to 5:00 pm. See MoAD for more details.