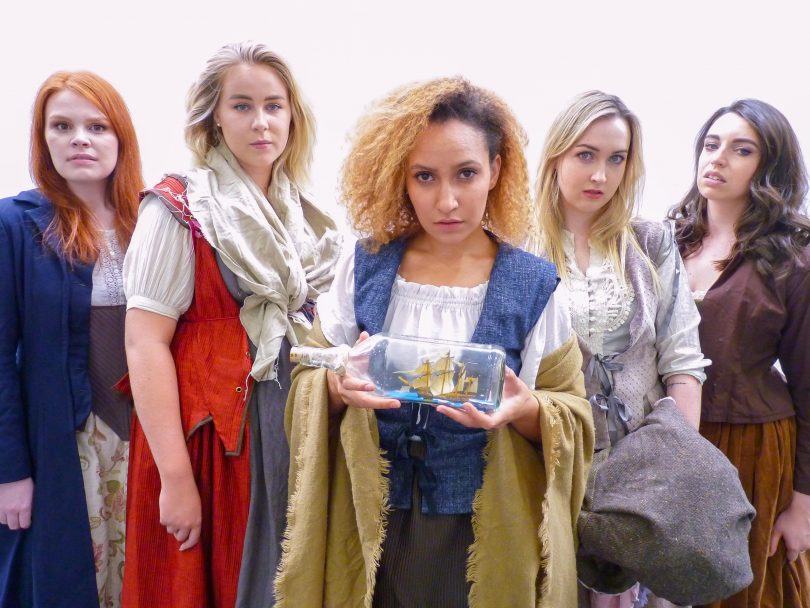 It’s nearly showtime for the cast and crew working on Echo Theatre’s production of Belfast Girls. The lead-in has been somewhat unusual, with a two-month break separating rehearsal periods.

The play is set in the 1850’s and explores the disastrous consequences of Ireland’s Great Famine. Given its scope and scale, having that extra time to sit with the source material might accidentally prove to be a masterstroke.

“It’s been really interesting for me,” says Director, Jordan Best. “It gave us two weeks to work purely on the text – the famine, the time, the accents – and then it gave the actors time for that to really sink in properly before they came back and walked in to the full set and constumes and everything.”

The show follows the lives of five orphaned women who journey to Australia with the promise of a better life. Best explains that the reality was far from what they envisioned. The most depressing part? Many of the problems these women faced have stuck around. 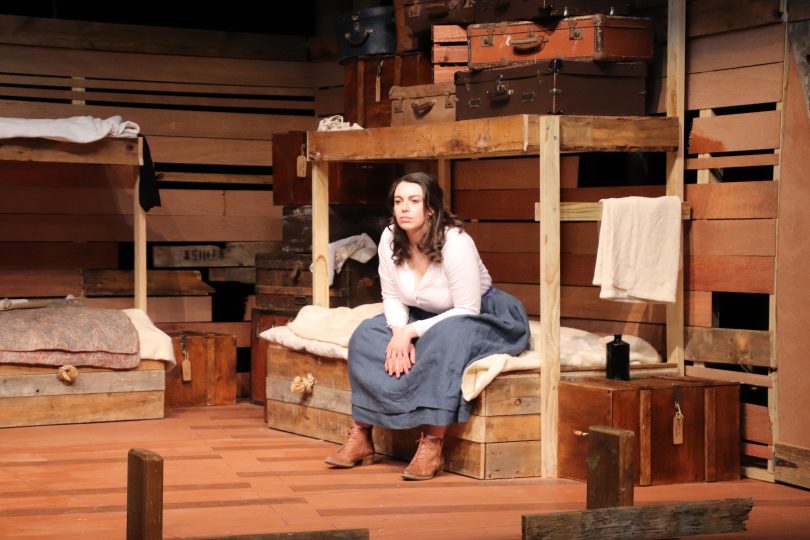 “They were really a commodity, they were being sent over here as wives and cheap labour. Really they were refugees, escaping horrible conditions back home.

“To have the courage to leave behind everything you knew and everyone you loved to get on a ship for four months to go somewhere so alien and so foreign would be terrifying.

“A whole lot of them ended up in Yass and Goulburn, and so immediately I thought, ‘I have to get this play on’.”

As it turns out, around the time that Best was discovering Jacki McCarrick’s script, a team of creatives from Queanbeyan were reaching out to her about their new in-house production company. This run of Belfast Girls doesn’t just mark its Australian premiere, it’s the debut production for Echo Theatre, The Q’s brand new creative partnership.

“It was perfect timing for all of us,” says Best. “It’s a new venture. Eventually, the plan is to tour shows. I don’t think enough work leaves our area. We have fantastic artists, but you hit a ceiling and it’s very hard to break through that.”

In a time where digital media and stay-at-home entertainment threaten to push contemporary theatre to the fringes of the arts, projects like Echo Theatre hold even greater importance by finding ways to sustainably produce shows and innovate in the arts community.

“I have people say to me, ‘why would you go and see a play now when you have Netflix and Stan?’ There’s something about a live person, being affected by a living, breathing thing, that is so totally different to watching a movie and having to pause it or turn it up because the kettle’s really loud.

“I think art is how we always process things. It’s one of the best ways to change people’s hearts and minds. If you can manage to entertain people you’re more likely to be able to educate them because they’re open.

“We’re so saturated with horrible news stories, you can be a bit turned off. For these girls, it was so horrifying, yet they’re still capable of laughing and singing. And everyone is. It’s an outlet to feel and process things, but also the ability to look at it from another side. It’s so important to allow yourself to laugh so you don’t become so totally overwhelmed.”

You can see Belfast Girls at The Q between Saturday 24 August and Saturday 31 August. Tickets are $25 for U25s, $47 for concessions and $52 for adults, available now at www.theq.net.au.

Dan Cope - 14 minutes ago
👏 well done Emma. View
Alexandra Mary - 46 minutes ago
Jaimie-Lee Peattie it is! So awesome to see more being set up View
Montana ONeill - 2 hours ago
This is good to see and hopefully it grows throughout the region to other areas💙 View
Opinion 51

@the_riotact @The_RiotACT
A new Senate report is calling for changes to Australian Public Service outsourcing, with one Senator describing it as a world of opaque contracts, rent seekers, shadow workforces and 'sleazy Canberra deals' https://t.co/KB17Gr1YvB (50 minutes ago)