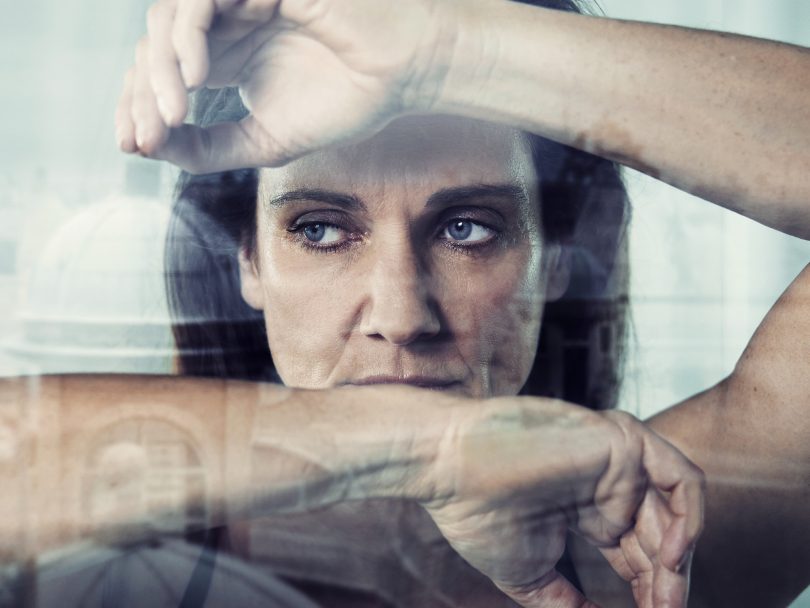 Catherine McClements in Antony and Cleopatra. Image by Pierre Toussaint.

The Canberra Theatre Centre 2018 season is well underway. Featuring a curated collection of the best work from around the country, the Collected Works 2018 season brings together powerhouse performances including the two highly anticipated – and always popular – Bell Shakespeare productions starring Kenneth Ransom as Julius Caesar and Catherine McClements in Antony and Cleopatra.

First, on the calendar, Bell Shakespeare returns to The Playhouse from 12th – 20th April with a new production of Antony and Cleopatra. Set in the ruthless, ever-expanding empire of Rome, Shakespeare paints a portrait of a love too great for the world. Mark Antony is a hero in a post-heroic time. He is torn between duty and love; his responsibility to Rome and his new life in Egypt; to the world, he helped conquer; and his passion for Cleopatra.

Complex, charismatic, fierce. Cleopatra is a mother, a lover, a Queen. A woman not to be defied. Peter Evans, Bell Shakespeare’s Artistic Director and Director of this production of Antony and Cleopatra said, “I continue to be fascinated by Shakespeare’s ability to take the grandest moments in history and make them profoundly personal. Antony and Cleopatra charts the course of two of history’s famous leaders, the world’s first ‘celebrity couple’, but at the core, it’s a story of love, of passion, of heartbreak.”

As with any ‘celebrity couple,’ both Antony and Cleopatra are “Independently famous and incredibly powerful in their own right. When they get together, we are fascinated and interested,” Peter said, but even more enthralling is exploring how the two lovers “Juggle the interests of their people and country, and what it is to balance a relationship and an epic leadership, as they were both epic leaders.” 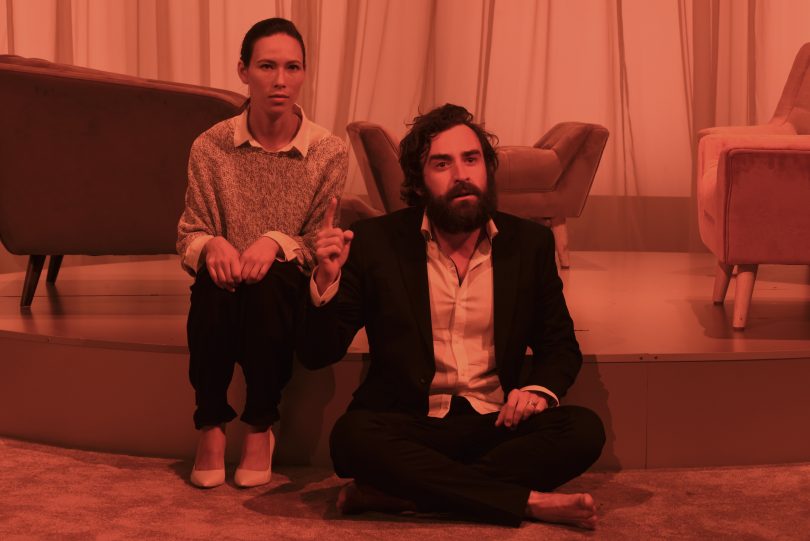 Ursula Mills and Johnny Carr in Antony and Cleopatra. Image by Heidrun Lohr.

For Bell Shakespeare alone, Peter has directed over a dozen productions including Richard 3, Othello, Romeo And Juliet, As You Like it, The Dream, Tartuffe, Phèdre, Macbeth, Julius Caesar, The Tempest, The Two Gentlemen Of Verona, and Intimate Letters with the Australian Chamber Orchestra.

We had the opportunity to speak with Peter about all things Shakespeare, the upcoming production, his role as Artistic Director and his thoughts on Canberra.

We were especially charmed and proud to hear Peter say that both cast and crew, “Everyone always looks forward to the Canberra leg of the tour. The Canberra Theatre Centre Playhouse is fantastic, one of the best in the country with great sound. Since Bell has been performing there for over 20 years they have built great relationships.”

Peter also explained how they pick the productions every season. “Two things need to come together for choosing a production – the theme of the play must be good to explore and finding the artist that would be great for the role.” And that is exactly how Antony and Cleopatra presented itself. 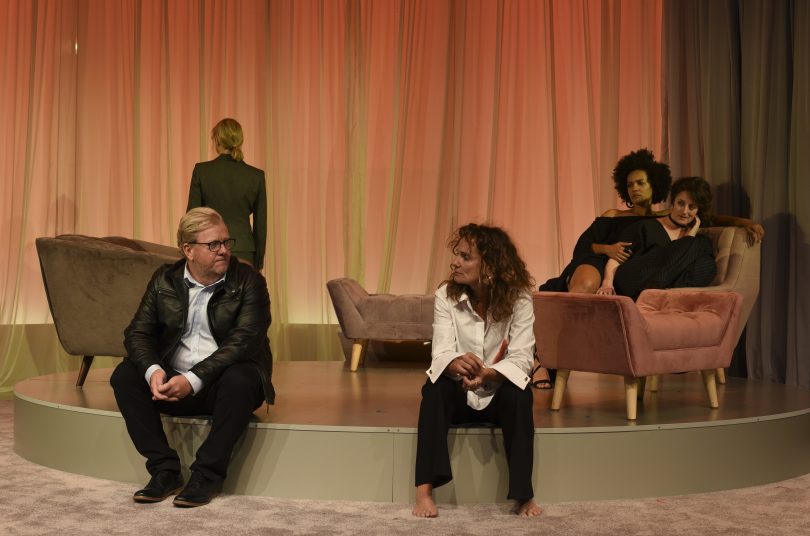 Steve Rodgers and Catherine McClements in Antony and Cleopatra. Image by Heidrun Lohr.

Peter revealed, “One of my interests – and Shakespeare’s – is leadership and power and gender and power.” “Antony and Cleopatra really suggested itself as it tackles all of the above – leadership, power and gender”. Coupled with the fact that Peter has previously worked with Catherine and “thought she would be a great Cleo, the play presented itself in the ether.”

As always with Bell Shakespeare, Peter revealed to expect powerful performances and a modern take on the set, setting and costumes for the adaption of the production, saying, “It is contemporary, stylish and luxe with Antony and Cleopatra taking on a Rock Star celebrity cool status that we have afforded to some recent young world leaders. They are very powerful, very rich, very sexy and very worldly!” 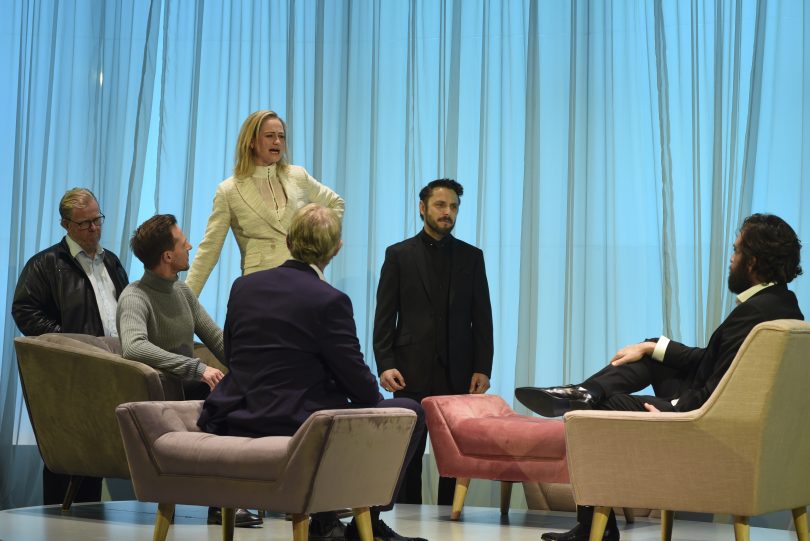 Bell Shakespeare returns to The Playhouse at Canberra Theatre Centre with Antony and Cleopatra from 12th – 20th April, for bookings visit canberratheatrecentre.com.au or call the Box Office on (02) 6275 2700

chewy14 - 4 hours ago
Kenbehrens, "potentially safer". We are all "potentially safer" if we never leave the house either, but luckily most of us un... View
JC - 4 hours ago
Chewy in this instance it is NSW who is doing something different and did so without consulting or advising the ACT who is im... View
chewy14 - 4 hours ago
You do have to laugh at their statements about "being more comfortable" with further changes because of the high Vax rates. T... View
Opinion 85

jorie1 - 4 hours ago
Hi Assiduous, I do agree that $500 per week is a lot of money - but the majority of that money goes to the ACT government in... View
assiduous - 4 hours ago
$500 per week is not low - it is enough to build a modest detached family home every 10 years. It is a reflection of Australi... View
Peter Jovanovic - 7 hours ago
So if it all gets too hard for the parasitic landlords and their parasitism isn't as lucrative as they hoped they'll just dem... View
News 39