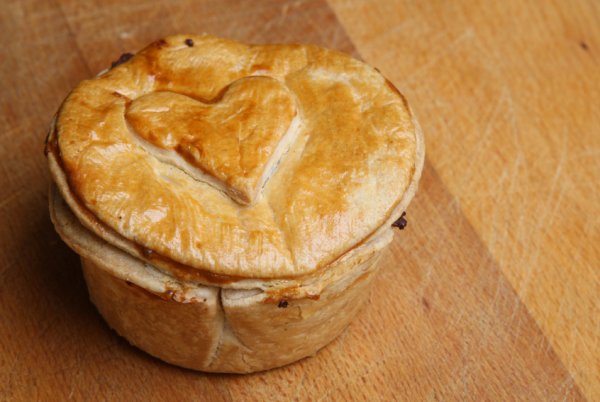 There have been two occasions when I have truly missed the greatness of the Aussie pie. On one of my first dates with my husband, we went along to a Chelsea match and he bought a couple of pies (…and they say romance is dead). It had been microwaved which to my mind is an unforgivable pie sin, but was also made up of a fairly tasteless gravy and bits of what tasted more like old erasers grated up than anything resembling meat. The second was when I sampled the great and famed ‘pie and mash’ in a South London pie shop. The pie was not only floating in a slick of what was referred to as liquor (they say liquor, I say dishwater), but rose to the lofty height of about 1.5cm and contained not a great deal other than a jelly like gravy. Yuk!

When I first brought my husband ‘home’ to Australia, he had a list of tasks to achieve during his time here. That list included sampling a chunky steak pie from Brothers Oven. He nearly passed out and went to pie heaven.

So, this week we’re breaking out the big guns. Who makes the best pie in Canberra? Judgement will be made on a steak pie, none of this cheese and bacon business.

Elaines Gourmet pie’s Dickson, the chunky steak and bacon is a favorite.

Does Bungendore count as ‘Canberra’? If so put me down for one vote for the Gunna Doo Bakery in that town.

Lamb and Mousaka at the Griffith Butchers. They were the best. But no longer.

Elaines Gourmet pie’s Dickson, the chunky steak and bacon is a favorite.

hmm, but you can’t eat the aluminum foil casing – pies need pastry all round, i rekkun…

Lamb and Mousaka at the Griffith Butchers. They were the best. But no longer.

I always found the taste of the pastry a bit odd at the Griffith Bakery.

I would nominate the bakery at Fyshwick markets – the one near Wiffens, not the Vietnamese bakery as I haven’t tried theirs. Price is good, fillings are not ungenerous which can often be a problem with meat pies and they have a range of flavours. They don’t stint on flavourings either. They also do really well priced family pies which I buy on occasion when we are there at the weekend.

Definitely think that one of the criteria when assessing a meat pie is the number of chunks of meat. The local bakery where I live often I think just passes the meat over the top of the pie rather than puts it inside!

Not strictly Canberra, but certainly better than anything I have ever found in Canberra:

1. Gunnadoo in Bungendore
2. Trappers in Braidwood

Can I vote for Dobinson’s as having the most over rated pies in Canberra.

So many people recommend pies from there and I find them WOEFUL !

Best pies for me are on the South Coast.

I can barely look sideways at a pie since getting a serious case of food poisoning about 3 years ago. Does that mean I have become a terrorist now?

Can I vote for Dobinson’s as having the most over rated pies in Canberra.

So many people recommend pies from there and I find them WOEFUL !

Best pies for me are on the South Coast.

I don’t like pies, but Dobs does great french vanilla slices.

Un-Australian comments such as these are likely being monitored by the authorities.

What is your position on vegemite? Think carefully before answering.

It’s not strictly Canberra, but Coles at Riverside Plaza Qbn is the only place in the region which sells Garlo’s Pies. You have to heat them at home but they are by far the best pies I have tasted.

I can barely look sideways at a pie since getting a serious case of food poisoning about 3 years ago. Does that mean I have become a terrorist now?

It would almost be impossible to get food poisoning from a commercial meat pie. Was the meat pie confirmed as the source?

I buy my pies from kitchen revival – a private caterer – he makes any pie you fancy. My last order was osso bucco in garlic and valpolacella, mama mia day was so good!!!!

Not a pie shop but Pork Barrel pies are the best!!!!!

Dojo bakery in Braidwood. Their lamb and fenugreek pies are a thing of beauty. Their steak and red wine pies likewise.

Diane Clare - 12 hours ago
Lizzie Rose - we used to stop there for dinner on the way down to Broulee. Do you remember getting a lolly from the dolphin c... View
Community 3

MERC600 - 13 hours ago
Tis a sad thing. Have wandered in at various times over the last 30 odd years, and will miss the tav and Jenny and Gumby. Sti... View
John Coleman - 14 hours ago
Alicia Conley as long as your protest doesn’t delay my McNuggets order thanks View
Opinion 106

Dan Adams - 14 hours ago
Sign and share the petition to return the limits back to 60km. https://chng.it/chvTLkD8bc View
News 198

Dan Adams - 14 hours ago
Sign and share the petition to return the limits back to 60km. https://chng.it/chvTLkD8bc View
Community 23

bj_ACT - 14 hours ago
The Xpresso buses used to get people from Tuggeranong suburbs like Kambah and Wanniassa or Calwell and Richardson into Civic... View
News 24

@The_RiotACT @The_RiotACT
When it comes to collecting, we reckon there are few wiser than Canberra's Angela Plant. After all, she collects owls - a group of which is called a Parliament - such is their perceived cleverness (or the name's ironic) https://t.co/Bv0XLJgpNL (11 hours ago)

@The_RiotACT @The_RiotACT
The winners have been announced for a Father's Day scarecrow competition, with more than 600 votes cast on 51 colourful and creative entries. Take a browse through some of the entries https://t.co/BSQd7MWk8A (12 hours ago)