Best of Canberra Taste Off – Bacon and Egg Rolls

Funnily enough, I had a number of offers to assist with this week’s Best of Canberra Taste Off. Bacon and Egg rolls (or egg and bacon rolls – whatever floats your boat) seem to be a general favourite of many. The nominations gave a loud shout to ONA Coffee in Fyshwick with a gentler nod towards Kindle in the City, with many other suggestions along the road.

I took my husband along (a self-confessed addict of the bacon and egg roll) and we tried ONA first. To be honest, I had never heard of it and was pretty surprised to find a cute and cool little café in Fyshwick (a part of Canberra often found to be lacking in such niceties). It was a Tuesday lunchtime and pretty busy with people dining in and waiting for food and coffee to go. We ate in and enjoyed a particularly good cup of coffee as well. 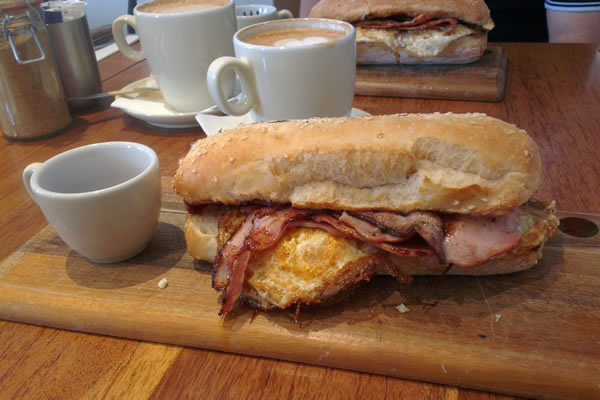 When the bacon and egg roll arrived, with a hint of vintage cheese and BBQ sauce it was a bit like discovering the Holy Grail. Served on a petit pain with the perfect balance of crunch outside and soft fluffiness inside, it was filled with plenty of perfectly cooked bacon (just a bit browned without being burnt) and soft but not ‘explode down your arms’ eggs. On the side was a small dish of BBQ sauce, which was none of your standard supermarket condiment, but thick and spicy with a slightly sweet finish. The silence that descended at the table spoke volumes of our food enjoyment.

We openly admitted it was going to be hard to beat and almost didn’t bother matching anything to this masterful display of simple breakfast ingredients.

But, we headed to Kindle in the city which is tucked away on City Walk and presents as a little oasis of cool and comfortable with a style combination of hippy and art deco. The coffee wasn’t as good admittedly but the bacon and egg roll measured up better than expected. Served with caramalised onions (offered upon ordering so you could easily decline if you’re not taken with the idea) and BBQ sauce (again, we were given a choice – BBQ or tomato). It came served on a long Turkish bun which was nice – fresh and soft. The bacon wasn’t as plentiful but was cooked well and the eggs were cooked slightly firmer than ONA. All in all a pretty good bacon and egg roll. The service here was also really friendly. We were there towards the end of their business day and the guys serving were still smiling and made us very welcome. 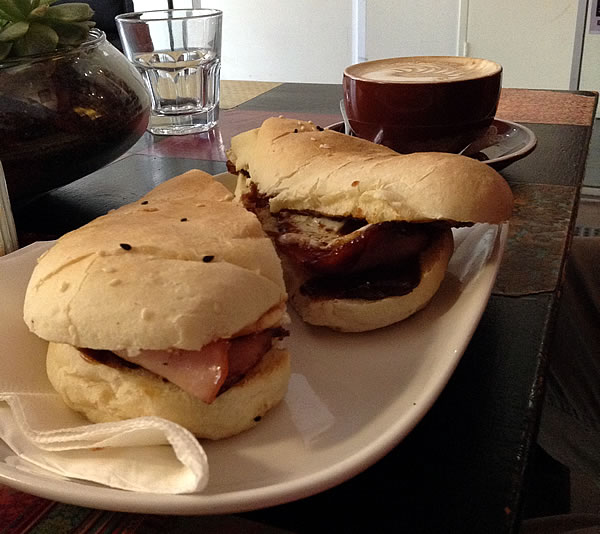 It has to be said though, we still talk about the culinary experience at ONA.

I recall a café in Woden, upstairs in the place of the current jeweller diagonally opposite Betts. It must have been some 15+ years ago but they served the best bacon and egg rolls I have ever eaten.

If you are a lover of a good bacon and egg roll and haven’t made it out to ONA yet, do yourself a favour and take a long lunch, or arrive to work late after treating yourself to breakfast. You won’t regret it.

Had this healthy protein rich meal after a good workout session in gym and trust me , loved it ! 🙂

Ran out of eggs the other day and went down to Tranquillo in the Mode 3 building on Lonsdale st for an egg and bacon roll. Was at least the size of my head! No wonder there’s always a billion tradies heading there. Bread was awesome too, definitely recommend.

I recall a café in Woden, upstairs in the place of the current jeweller diagonally opposite Betts. It must have been some 15+ years ago but they served the best bacon and egg rolls I have ever eaten.

Couldn’t agree more, although these days it’s Ona in fyshwick for me as well. Yums was the cafe in Woden. Phil and Angelo now run My Cafe in Manuka. Best bacon and egg rolls in Woden at the time. Probably explains some of my waistline.

I don’t think this place was open when you first raised the E&B issue, but if you want an industrial-grade roll, the newly opened “Spit Shack” in Pialligo (just off Pialligo Avenue before the airport) serves them from 7:30am to 10:30am.

I had one shortly after they opened – while it was really rather good in all the important respects, it did almost kill me as I decided I had to eat the whole thing. I was left wondering, though, what kind of people could routinely consume that much food?

The answer, it seems, is tradies (unsurprisingly). And the constabulary. So far I’ve spotted general duties and traffic vehicles, and the far rarer breed, police motorbikes. None of the actual cops that I could see seemed to be obese, so maybe fighting crime, in all its forms, requires a crapload of calories?

I don’t normally go for these foodie threads much, but that bacon and egg roll in the first photo (from Ona) looks spectacular!

I find that when cooking strips of bacon, if it’s not burnt just a bit, then it must be undercooked somewhere by default.

HiddenDragon - 7 hours ago
Some cautionary words here about the limits of battery technology - https://www.abc.net.au/news/2021-02-16/bill-gates-zero-em... View
dulynoted - 10 hours ago
those statistics might be outdated; renewables are getting cheaper and more energy efficient every year as technology improve... View
Capital Retro - 11 hours ago
In which way isn't nuclear power profitable? It depends on which experts you are talking too: https://www.ceda.com.au/NewsAnd... View
Sport 2

Hot in the City: Pit Stop Coffee #1 is about to fill the coffee shaped hole in your next Cotter visit