Best of Canberra Taste Off – Pastries

For this week’s taste off I sported my elasticated trousers and went on the hunt for Canberra’s Best pastries. I should clarify here that for me, pastries are sweet and generally eaten as breakfast or mid morning with coffee.

The two establishments to obtain the most nominations were Flute in Fyshwick (the winner of our cake challenge) and Silo Bakery in Kingston.

And so, in the name of searching for the Best, I went out and sampled both. To allow a fair comparison I selected a croissant, a raisin swirl (or escargot) and an almond croissant from each (I did have some assistance in the sampling and didn’t eat the lot myself – honest).

I started with Flute. A little oasis in Fyshwick, Flute is often talked about for their cakes. I hadn’t sampled their pastries before. As I stood at the counter, the urge to say ‘one of everything please’ almost overtook me. If it weren’t for the cash only payment system I may well have sampled the lot. 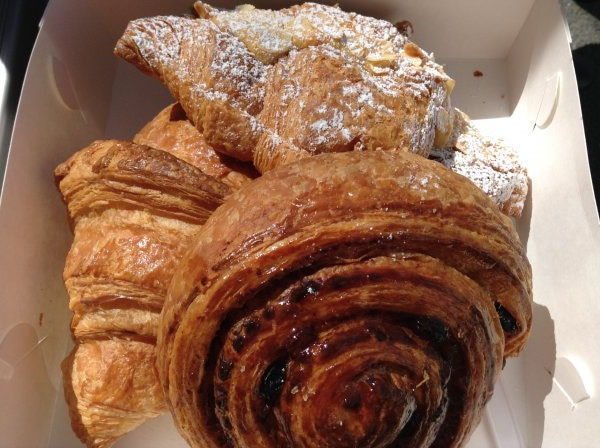 I sampled these ones with a friend of mine who is a self confessed lover of all baked goods. None of the wares looked out of the ordinary or more or less delicious than your regular pastry. We were in for a glorious surprise. Although the raisin swirl looked like it would be a bit dry and uninspiring, as we broke it apart the pastry flaked and crackled and revealed a sticky interior with juicy raisins sticking to the insides of the swirl. Mmmmm – smiles all around. We then moved onto the croissant. Again, it didn’t look anything special but as we broke pieces off, the pastry flaked and squashed to reveal a light, buttery ever-so-slightly crunchy on the outside croissant. Silence came over both of us, and then knowing looks. It was good. For me, it was the best croissant I’ve had outside of France (a pretentious and w*nky statement I know, but it was that good). The almond croissant was equally impressive without too much of a marzipan flavor and a light finish (I often find these a bit heavy and too sweet). It was dusted with icing sugar and very nice indeed. We were however still relishing the croissant, which really was quite something. 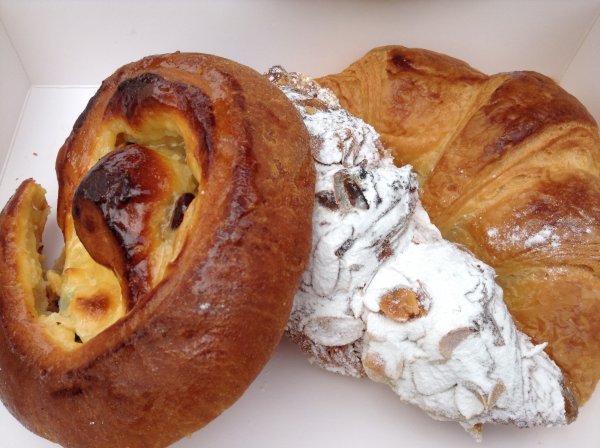 Next on the list (and two days later to allow my appetite to return) I found myself in Silo Bakery in Kingston. I confess, I had never been here before and felt like I’d wandered into paradise. My ‘almost 3 year old’ daughter was with me and her eyes were just the right level to take in the banana slices on top of a glossy looking tart. Her eyes widened and she let out a spontaneous ‘oooooooh’. She took in the delights in the case whilst I placed my order. The raisin swirl had a bready texture with more custard between the swirls. For me, I didn’t enjoy it as much as the Flute one but I do appreciate this may be a personal taste. I couldn’t pick much of a difference in the almond croissant. The silo one was equally delicious with a light almond filling, not too much marzipan and dusted with icing sugar (although the dusting was more of a blizzard). The final sample was the croissant, which if I had tried prior to the Flute tasting, would have been a triumph. But, as it stood it wasn’t quite as good. That being said, it was still one of the best I have tried outside of Europe.

On the basis of these three delights, I would crown Flute the winner. But, I will be back to Silo to sample their tarts because they looked pretty amazing.

If you are a lover of croissants and haven’t tried one from Flute, find some time to get there. It’s well worth the visit – just try to resist the other goodies on offer!

Best pastries can be found at Dream Pattiserie In Fyshwick. Escargots are fantastic and good coffee.

Granny’s bakery in Dickson square does great snail shell pastries, but you need to get there early – they hardly make any.

And I think croissant do’or has reopened on the bus interchange – they do lovely palm leaves in puff pastry.

There are a few places in Civic that sell Flute’s gear – Bean in the City and Lonsdale Street Roasters (last time I checked).

But leave the apple crumble pastry alone – they are all MINE!! Soooo good!

Timothy Bailey - 8 minutes ago
someone's exaggerating eh! View
Maya123 - 2 hours ago
I moved here from a small country town. It took me about 20 years before I could appreciate the 'dry' Canberra landscape, bec... View
Jo Fernandes - 3 hours ago
Canberra has a special place in my heart as my home town, but the energy is too slow for my vibration. I do yearn for my kids... View
Community 39

Donna Christie - 52 minutes ago
Lynne Vidas Silvia runs the doll museum and she is lovely. I haven’t yet met her in person. View
Craig Pope - 4 hours ago
Been there and stayed twice Lawrence knows his stuff great evening... View
Opinion 211

Mick Smith - 1 hour ago
John Dillon What can you say, nobody will listen, so the idiots who voted for him get what they deserve, its come to a point... View
chewy14 - 2 hours ago
JC, "Mostly funded". Where are you pulling that from? Not the government's business case obviously. And there's a couple of f... View
News 35

HiddenDragon - 2 hours ago
If the Delta variant is as serious as the political class constantly tell us (and thus justify destroying the livelihoods of... View
Food & Wine 21

Chris - 2 hours ago
Welcome to the 19th century Canberra....by the time this ancient mode of transport is built to Tuggeranong the world will be... View
News 3

Chris - 2 hours ago
Why Rugby only field? So it doesn't get used in Summer? Best make it all round and get some AFL games too.... View
bj_ACT - 2 hours ago
$195k only gets you a nice glossy document outlining whatever the requestor wants. Proper data collection, proper analysis, p... View
ChrisinTurner - 5 hours ago
I wonder if they will tackle the continued removal of street trees on Cooyong Street that started with the illegal Skate Park... View
Community 3

TimboinOz - 3 hours ago
Forgot a heartfelt thankyou to all the volunteer firies. View
TimboinOz - 4 hours ago
My wife and I were driving home from Sydney to Nth Kambah (Mt Taylor's estate) when we heard about the 2003 firestorm hitting... View
Food & Wine 8

ChrisinTurner - 5 hours ago
Spending $billions on doubling the journey time to Woden by replacing buses with trams wasn't too expensive. View
Public Sector 2

TimboinOz - 5 hours ago
I do hope that some Senior Managers are required to do some of these courses AND get assessed so that those with an inbuilt /... View
show more show less
*Results are based on activity within last 7 days

Snow is expected to again fall on the Brindabellas and the ranges on Friday (23 July) and over the weekend,...
Opinion 56

Of all the NSW criminals of his generation, Crookwell-born Patrick Hudd was one of the most devious and dangerous. In...
Opinion 211

Doughnut lovers rejoice - a doughnut bar has opened in Kingston. Located in the space once occupied by Hale +...
News 96

This past week marked 24 years since the tragedy of the failed Royal Canberra Hospital implosion, one of the darkest...
Opinion 56

A good friend of mine is moving to New York. She's spent the last six years in Tokyo and is...
News 54

In the lead up to the Sydney 2000 Olympics, plenty was happening behind the scenes, with cities jockeying to play...
Community 39

The renewable energy sceptics out there should welcome last week's announcement of the opening of the ANU's new research lab...
News 35

Fall back in love with Adore Tea

The best high teas in Canberra

@The_RiotACT @The_RiotACT
It started as a hobby, but now the #Quandialla Candle Company is proving a drawcard for the small central west NSW village https://t.co/WVpyGApmfa (3 hours ago)

@The_RiotACT @The_RiotACT
Canberra's first ever SpaceHack competition delivered some astronomical ideas, with the winning team's concept potentially having a huge impact on spacecraft and satellite technology https://t.co/ddwggkaHJW (4 hours ago)