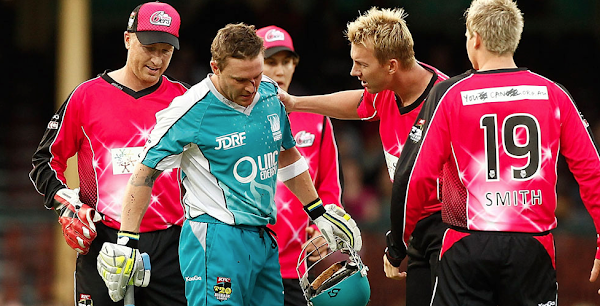 The Daily Telegraph has musings from Cricket Australia about expanding the woefully named Big Bash League to include a Canberra team next year.

THE Gold Coast, Canberra, Newcastle and Geelong are all in the running to have a Big Bash team as soon as next summer as the reinvigorated Twenty20 competition continues to explode.

With ratings and crowds surging ahead of expectations, Cricket Australia has already began looking at further expansion years ahead of its original timetable.

The long dream of being able to trek down to Manuka Oval after work for a top notch T-20 match finally draws closer.

Hey this is great news – and I think ‘Big Bash’ is quite a good name, it is a slog fest after all.

Note for those without Foxtel, the T20 isn’t available with Foxtel on the Xbox – a friend found this out the hard way after subscribing for a month just to watch the Big Bash.

Is that why I had a missed call from Cricket Australia on my phone …. Yes, I am available 🙂

After seeing the commentators get excited about a crowd record at Bellerive the other night (IIRC it was 13,000+) I was wondering why we don’t already have a Comets team playing in the Big Bash.

Would have been the perfect opportunity to get Canberra on the cricketing map for a few hits and giggles.

everyone brings a candle?

I think the only failure is the two teams in Sydney and Melbourne. Plus the generic flouro uniforms, each team a seperate colour. What would have been the issue if one team wanted to be blue and white, another blue and yellow for example?

Still i’d go watch a T20 game after work if we had lights at Manuka. They’ll probably play Canberra games as double headers starting at 3pm though instead 🙂

Prefer to have a test match at Manuka once every few years, eg this year they could have played either a 3 test series against NZ or 5 against India.

… and they said Packer’s one-day comp would be the end of cricket. They certainly didn’t envisage this abomination!

Easy fix, surely. Tell Kevin Sheedy it would be great to have lights at Manuka and then we can build them with GWS funds, haha.

Gee, more pictures on TV of sportsmen at Manuka Oval with rows of completely empty seats behind them.

anyway, lime green is our colour. i remember lime green milk and breach in 1989.

Wouldn’t they play at Canberra Stadium? The short boundaries would suit the format.

That’s called a Test – and another one begins tomorrow! W00t!

Yes, we’ll have to apply the <blink> tag!

I expect subsequent teams will have to combine multiple bright colours – I vote for the SLC/Maccas/DHL classic of red/yelow.

Not to mention the blood-pumping thrill of playing-out for a draw.

Great idea but what is all this Manuka Oval garbage? Canberra stadium is ready for it, as it is played in the evenings. Also, how do you get all the spectators to and from the game, considering the miserable public transport system we have and lack of parking around the ground? Each bus carries 45-50 people and there are only two [2] services after 9:48 PM going to City or Woden. So, 100 people get out of the ground and the other 12,550 have to get a taxi or walk.
Cricket Australia needs to consider this before even thinking about bringing a national sport to a small country town like Canberra!

I think if they could get lights at Manuka I’d be a season-ticket holder. Even at Canberra Stadium I’d go fairly often.

I’m OK with the name “Big Bash”, otherwise it’d be called “Having a Bat” or “Whacking Off” or some other double-entendre (And the mathematically-correct “Increased Randomness” just doesn’t roll-off the tongue so smoothly).

Marea Fatseas - 47 minutes ago
Essentially, 80 percent will still go to landfill under this proposal, which is not a great outcome. View
Capital Retro - 9 hours ago
Are you suggesting that while there would be difficulty getting permission in locating and establishing another landfill in C... View
simm - 12 hours ago
It is really just a Waste Tipping Hub (TIP) proposed in the wrong location ... that being a populated built up area on a cong... View
Opinion 2

MERC600 - 1 hour ago
Tim I fear your saying 'The most obvious is the economic downturn created by COVID-19' will prevail. Also this Covid bug econ... View
News 64

David Brown - 1 hour ago
Will he still be a candidate? Just not an endorsed Lib? View
Guy Manton - 4 hours ago
Andrew Duncan there was a debate, theres been thousands of ongoing debates about these kinds of issues. Canberra doesn't supp... View
Andrew Brien - 20 hours ago
Canberra Liberals at their best. Apparently one was claiming get on Sportsbet they have great odds of the Liberal Party to Wi... View
News 25

David Brown - 1 hour ago
Baaa wants to sell off our foreshores to his developer mates. 😟 View
Julie Macklin - 6 hours ago
George Watling I live in the south, but the light rail is a useful way to get to Gungahlin after catching a bus to Civic. I h... View
Julie Macklin - 6 hours ago
Amanda Evans That's why I wrote, "with hopefully enough handicapped parking for those who really need it." I sometimes have a... View
Breaking 2

Acton - 2 hours ago
Who would have ever believed that Australians could treat each other in such a way. What happened to mateship in adversity? T... View
News 25

Capital Retro - 9 hours ago
CSC, this is a brilliant initative. View
chewy14 - 9 hours ago
Capital Retro, Your link doesn't say what you think it does. Firstly, your link is about an audit and it specifically says th... View
Capital Retro - 22 hours ago
Data on page 68 of this audit would appear to be at odds with what your colleague concluded: https://www.veolia.com/anz/sites... View
News 14

Capital Retro - 9 hours ago
When was the last infection of COVID 19 logged in Canberra? Compared to the rest of the world the pandemic is over in Canberr... View
HiddenDragon - 22 hours ago
Even if these figures are a little rubbery right now, with the federal budget being delivered 11 days before ACT election day... View
bigred - 24 hours ago
Alistair lost the election the day he declared the pandemic over. Anyone flirting with the notion of him as the head honcho w... View
News 2

@The_RiotACT @The_RiotACT
Fire, smoke, flooding and the worst pandemic in a century, oh, and don't forget it's also tax time. But it's not all bad news. Tax help is available from the ANU https://t.co/hBNZJlqa0V (54 minutes ago)

@The_RiotACT @The_RiotACT
NSW needs to employ 1000 additional firefighting staff if it wants to handle another Black Summer bushfire season, according to the union which covers the @NSWRFS https://t.co/FSx0LEJPQm (1 hour ago)

@The_RiotACT @The_RiotACT
After numerous near misses, Transport Canberra has released video of light-rail close calls and staged a dramatic exercise to highlight the need for vigilance https://t.co/cdIJYWDqnL (2 hours ago)