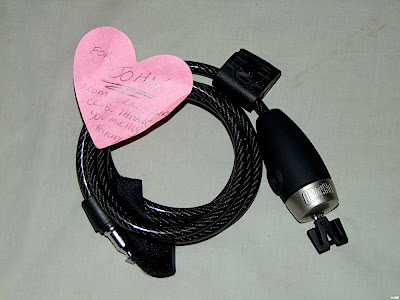 On Friday night I was riding with Rat Patrol and we’d come to rest outside The Front in Lyneham. (Some beers may have been drunk, and possibly some tequila, but I’m sure no-one was over the limit because that would be bad.)

There was a rocking crowd enjoying the bands into which the freak bikes and their riders slipped in and an astonishing tangle of twisted, cut, and welded metal (our bikes) was piled up against the tree.

At some point I noticed a cute young lady checking out the bikes so I went over and asked if I could help.

As it happened I could. She worked at The Front and needed to borrow a bike lock for the night (presumably for the locking up of a bike). In a generous mood I handed over my lock and its key and arranged to collect them from her the next day when she was also working.

For some mysterious reason the day after the ride I was weirdly sensitive to bright light and loud noise, not to mention nauseous. In fact it was heading into the evening when I even remembered I’d lent my lock to a complete stranger the night before.

A message to The Front’s Paul Jamieson confirmed that, in fact, there was a lock awaiting collection behind the bar and I picked it up last night, somewhat surprised by the attached note.

(Sadly despite being written on a pink heart the note contains no email or phone number).

Now at around $30 the lock isn’t the kind of money you can do something serious with (like buy a book), but I just wanted to note how much I like living in a community where you can lend something to help out a complete stranger and get it back. Doubly so with pink heart shaped notes attached, even if it turns out that was just what was handy.

Is this a thinly guised attempt to retrieve said cute girls email or phone number so when it is retrieved you can get a tv spot on Sunrise with Kochy and Mel about how two strangers fell in love via weird and wacky circumstances?

If that was the case, should have just rocked back up to the front to get said girls details.

Girls do things like this because they are cutesey, its what they do. Reading into them more than what they mean is a common male trait that even I still display.

Reading into them more than what they mean is a common male trait that even I still display.

Even you Danman? Egads we’re all doomed!!!

This is lovely JB, but newsworthy? Oh well, since we’re sharing nice stories – an actual lycra-wearing cyclist voluntarily said ‘thanks-a-lot’ to me this morning when the dogs and I moved out of his way on the bikepath. That almost never happens… made me feel all warm inside.

Tuggers would indeed be a much happier place if only more people used heart-shaped post it notes to express themselves (instead of guns,knives and fists).

For John from the crazy bike club. Thank you muchly. (can’t read the cute young lady’s name either)

On the topic of heart warming stories, on the other side of the world someone saved a duck…..
http://www.snopes.com/photos/animals/amazingduck.asp

For JOHN from crazy bike club. thank you muchly, Felicity (? this last word is a guess)

On the topic of heart warming stories, on the other side of the world someone saved a duck…..
http://www.snopes.com/photos/animals/amazingduck.asp

Downtown Spokane is where it’s AT!

Tuggers would indeed be a much happier place if only more people used heart-shaped post it notes to express themselves (instead of guns,knives and fists).

errr. if i gave a heart shaped post it note to express myself in tuggers, the ribbing i would get would be unbearable.

I am the girl in the OP.

Hmmm that caused silence for 14 minutes – such was the level of wow!

hk0reduck is neither a lady, nor particularly attractive I suspect.

Lyn Scougall - 6 minutes ago
Margo Bellis you told us that, that’s why we went there 👍 View
Margo Bellis - 27 minutes ago
Lyn....it was far better than Floriade View
Ali McNally - 2 hours ago
Nadine Pickersgill next year! View
Community 7

Grahame Barnett - 15 minutes ago
We "bribe" our magpie gang. We feed them. They don't attack their feeders. View
Karen De Britt - 16 minutes ago
Feed her mealworms, she'll come around 😁 View
News 33

Tramcar Trev - 22 minutes ago
$162million for about 1km of light rail does seem excessive. why do they insist on laying the track inn concrete where the tr... View
Sally Greenaway - 23 minutes ago
Steve Manns but that can't be right. It's too expensive even for our rates... View
Steve Manns - 1 hour ago
Sally Greenaway no. None. Not a cent comes from private investors. No ones going to invest in that. If you want to know where... View
News 28

whatwik - 27 minutes ago
Ha, try NSW regional travel. Disappointing yes, but prudent. Some of us do wonder about the obsession with the ACT Chief Mini... View
chewy14 - 2 hours ago
JC, No spin here, just facts. Whatwik claims that others have had to backtrack on their plans. Except none of the other state... View
News 8

Clive John Trenton - 40 minutes ago
Come on people. It was replaced for a very good reason! As an old bridge it was likely costing a fortune to maintain due to i... View
Mitch Carrington - 1 hour ago
Was fun riding over this for some reason Mark Humphrey Wheeler View
Greg Grant - 1 hour ago
About time! View
Community 25

Capital Retro - 43 minutes ago
The Australia Post vans deliver mail to them early in the day so that the postie bike person can use them as a suburban pick... View
News 244

Nanna Lola Apted - 45 minutes ago
Who will look after them and keep them tidy. Who will prune them back when they overhang the roads and block drivers vision. View
Geoff Jones - 1 hour ago
Money could be spent maintaining public spaces and mowing. View
Opinion 31

rspg - 53 minutes ago
Bureaucracy at its worst with no concept of real world realities. When Manuka oval and st Christopher’s can’t be accessed... View
News 25