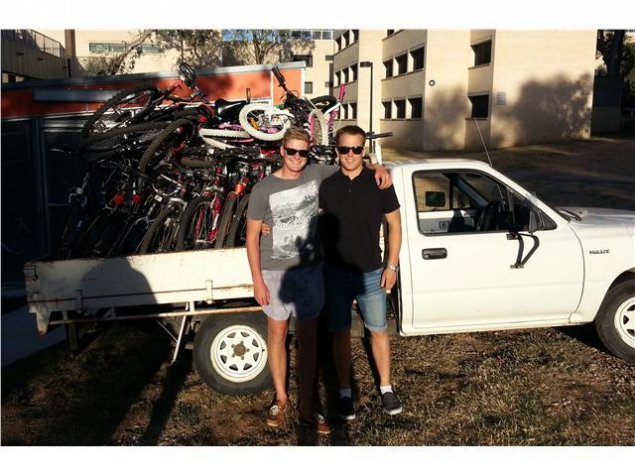 Two generous Canberrans are collecting, restoring and transporting second-hand bicycles to disadvantaged communities in Africa – and they need your help.

Bikes4Africa is a backyard project created by Michael Skene and Leigh Guilmartin, which this year aims to send 500 restored bicycles to Africa to be distributed by the Bicycling Empowerment Network.

“I’ve been to a few countries in southern Africa and seen first hand the need for some form of transportation. I’ve seen people travel many kilometres on foot for food, water and medical supplies. Bikes are a practical transport option for people in Africa,” Michael says.

“We’ve just cracked the 100 bicycle mark, and the goal for this project is to reach 500 bicycles. We’ll be shipping the container to Africa in September and hope to have all bikes fixed and repaired by late August.” 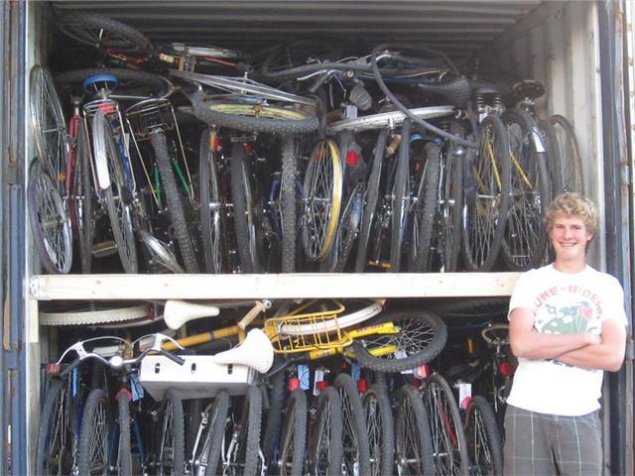 Michael and Leigh fix each bike so that it is in good working order, then pack them in a shipping container which is sent to the Bicycling Empowerment Network, an NGO based in Capetown.

“The first way that people can help is by donating any second hand bicycles. It doesn’t matter what kind of condition. The second way is through monetary donation which goes towards the costs of purchasing a container, transport, spares and tools,” Michael says.

One Response to Bikes4Africa needs your unwanted bikes!
Filter
Showing only Website comments

ChrisinTurner - 4 hours ago
But we have $billions to replace buses to Woden with slower trams. View
Opinion 16

Sofia Zivkovic - 5 hours ago
No point, comp is getting worse each year. View
Tim Mitchell - 12 hours ago
The joint A-Leagues men and women trophy really strengthens Canberra's bid. Would be strange having Canberra as the only team... View
Community 142

Ota Save - 7 hours ago
Sue Sutton No worries Sue. Happy to help ❤️ View
Sue Sutton - 8 hours ago
My Mum has wonderful neighbours who have been helping keep her lawn in check. Thank you Ota and family xx... View
Bill Gemmell - 8 hours ago
Barbara Eglitis I was wondering how long it would take. Seriously, I had the Fowles St Park project in Weston in mind. Sugges... View
News 34

purplevh - 7 hours ago
If a dog ever chased me on a bike I would turn around and chase it. They soon get the message when that happens.... View
purplevh - 7 hours ago
I like your point about heavy vehicles but the same goes for a motorcycle licence BECAUSE you are the one most likely to be h... View
Opinion 13

kenbehrens - 8 hours ago
A few years ago when we were visiting our son in Sydney, there were blankets and items of clothing under shelter on the stree... View
jwinston - 8 hours ago
harcm said “tim_c – what a load of rubbish you talk. What if your schooling was completely disrupted by domestic violence... View
Acton - 9 hours ago
The money you are giving out of misplaced guilt to a street beggar is just funding their drug, smokes and/or booze addiction.... View
News 1

Finagen_Freeman - 13 hours ago
So sad for family and friends. View
News 10

Linda Stapleton - 15 hours ago
I see the tram is already being blamed for this issue ... great to see some people have a one track mind. It makes it easy to... View
News 6

Linda Stapleton - 15 hours ago
I may no longer be a young woman but can I just say I have yet to meet one woman who has NOT been sexually harrassed or assua... View
show more show less
*Results are based on activity within last 7 days

@the_riotact @The_RiotACT
#Santa on a flat-bed truck, Basil Fawlty on the stage, a basketball battle, and a picnic for pooches are just some of the things happening in the #capital this week https://t.co/aWkQ2BvTSw (6 hours ago)

@the_riotact @The_RiotACT
A rehab #clinic specifically designed to assist #COVID-19 patients manage the ongoing symptoms of the virus is being set up at the University of Canberra Hospital https://t.co/WvD1IRUJRf (8 hours ago)