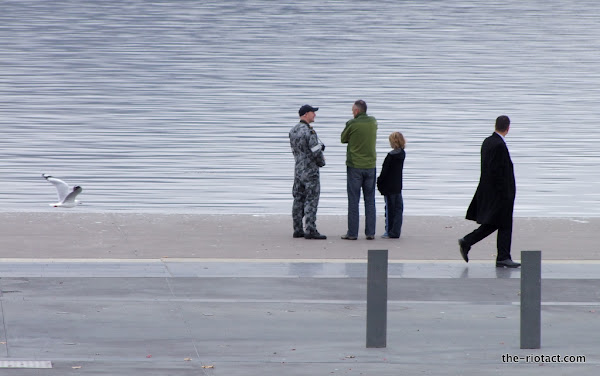 The Navy had promised a 4-5 strong display of Sea King helicopters over Lake Burley Griffin and up Anzac Parade.

So I tore myself from the Eagle’s Nest jacuzzi and the bevy of resident bikini models* to brave the near freezing cold and get some photos of this spectacle.

Arriving at the appointed noonday hour at Commonwealth Place I was reassured by the sight of a Navy photographer.

Half an hour passed. There were no helicopters, the photographer packed up. When I asked he said the low visibility had killed it.

* Some creative licence might have been used in this description.

Well methinks the choppers in question would have been coming up from Nowra. Between Nowra and Canberra there lies a range of mountins, where treetop hugging clouds are oft encountered this time of year. Rotary pilots (bless their intrepid souls) have somewhat less of a disposition to enter airspace where visibility makes their survival less likely, particularly in the event of a mechanical malfunction, something more common in the rotary world than the fixed-wing one. That I believe is a probable explanation as to why the much-anticipated whirly-bird spectacle has been defeated by the inconsiderate nature of the weather.

You mis-heard him, He said low serviceability….

Bronwyn Tolley - 3 hours ago
Karin Hagel Prince Phillip at Buckingham Palace, July 20th 1969. The day man landed on the moon ! View
Tig Beswick - 5 hours ago
Robyn Lynette Pierce - when I was a little girl, I went to the NSW Governor General’s house because my dad had been invited... View
Karin Hagel - 6 hours ago
Kylie Chance - if you read the article they say he has info on where to find a Hemsworth. Jugiong isn't far away... could sti... View
Business 36

Conor McNamara - 6 hours ago
Michael Wittman Ironic, coming from a wannabe SS. View
Aaron Still - 7 hours ago
Rob Thomas clever way of putting it 👍 View
Gem Gemm - 9 hours ago
I am so utterly dumbfounded that people are upset over this? Like water is wet. It's absolutely a micro aggression and subtle... View
Opinion 9

Áine Ní Tighearnaigh - 7 hours ago
Its good to draw attention to the poor maintenance practices of big bureaucratic systems running housing. I can provide accur... View
What's On 9

Louise Saber - 7 hours ago
Meg McLoughlin next time you are heading to Willinga Park let me know! View
Opinion 66

Shaun Cummins - 9 hours ago
Even a bee is noisy! View
lakefly - 11 hours ago
Rather than expansion, it should be shut down. These drones are not quiet at all. What real benefit do they really bring. Why... View
Daniel Oyston - 11 hours ago
Cue outrage ... View
News 2

retep - 11 hours ago
With concrete a substantial source of environmental warming gases I would think the ACT government would be all over this. No... View
chewy14 - 11 hours ago
BJ, The developers build what the market tells them too. If there wasn't a demand for the units they are making, they wouldn'... View
News 8

@The_RiotACT @The_RiotACT
Fancy making the most of the beautiful autumn days here in the capital? There's plenty happening - so get out and about! https://t.co/GuOk85t9aP (9 hours ago)