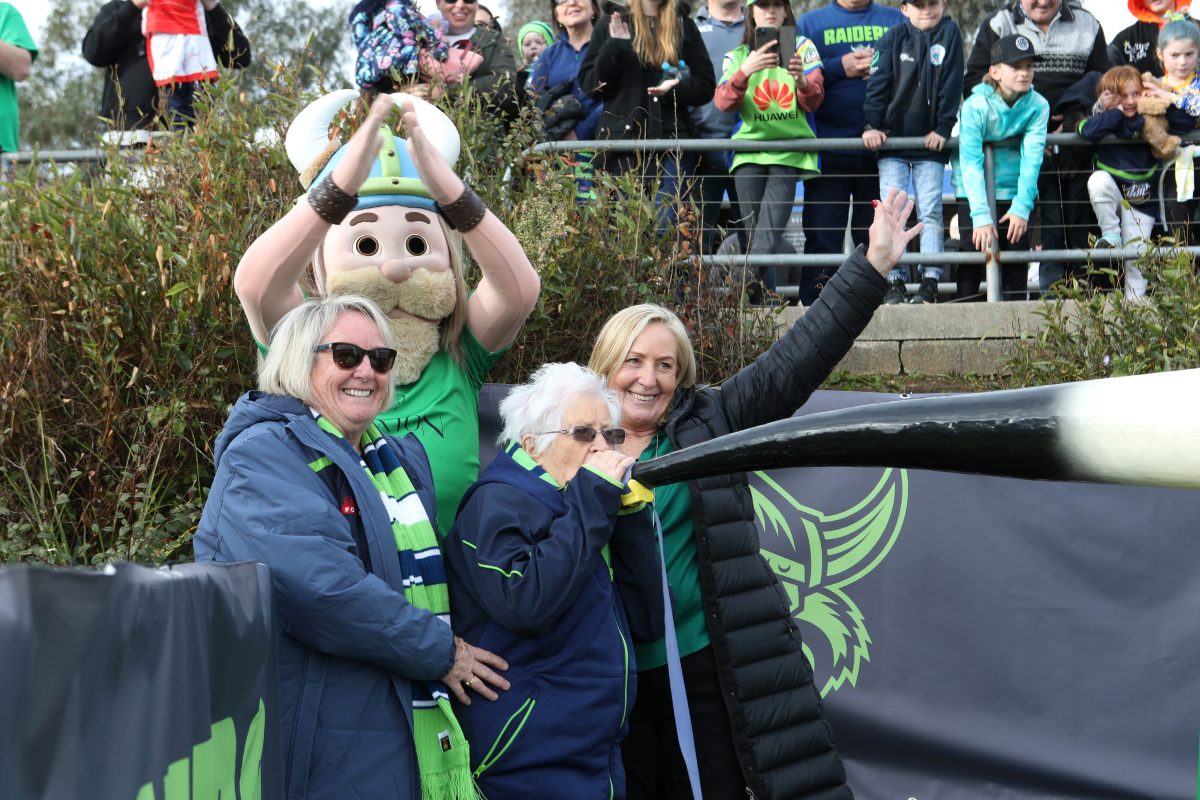 It’s been three years since 100-year-old Magdalen Sillis has been able to make it to a Raiders game.

But on Saturday (23 July), not only did she get to watch from the VIP box, but the Bungendore local also blew the Viking horn for what ended up being a winning home game.

“They weren’t going very well at all, but they came together in the second half,” Magdalen said.

“The players probably thought, ‘oh, she’s here to watch’, so they put on a good game.

“I can’t describe how good it was. They were so wonderful.”

The idea for her to blow the horn came on her 100th birthday on 29 May when her family invited Victor the Viking to the celebrations. From there, he organised for the Raiders die-hard fan to get onto the field and ring in a home game.

Magdalen was able to have a practice beforehand, which she said helped settle her nerves.

“You don’t blow it actually; you just sort of pretend,” she said.

“But everyone joked with me beforehand. One of my sons-in-law gave me a toilet paper roll to practice on.”

The centenarian was also interviewed on the field and then given the VIP treatment in one of the boxes.

“It was all part of the birthday surprise. There was lots of beautiful food,” Magdalen said.

Ricky had torn his calf muscle celebrating Corey Harawira-Naera’s try but was still in good spirits.

“He must have been in pain when talking to us, but he still had a smile,” Magdalen said. 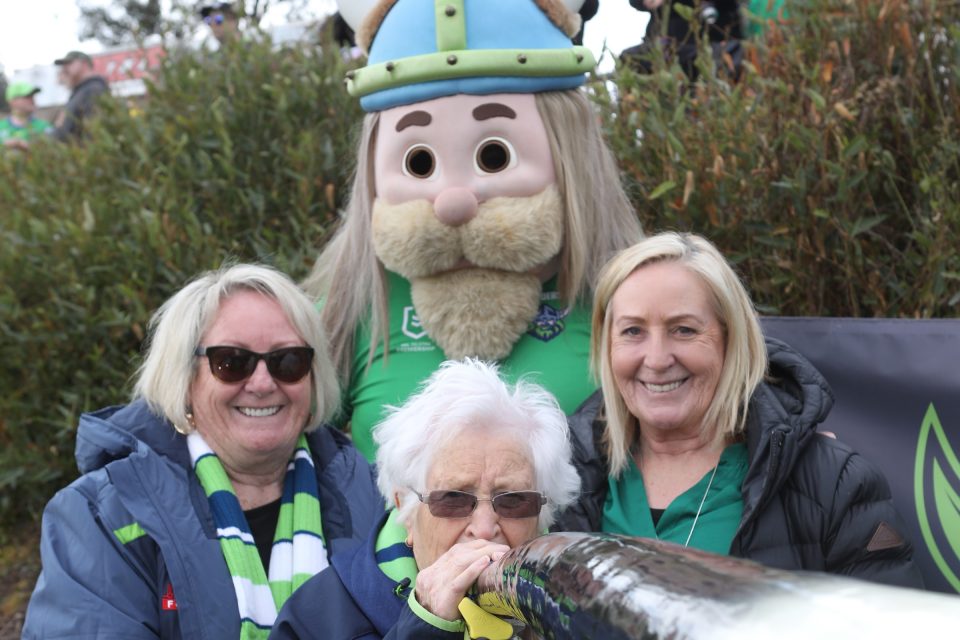 Magdalen blowing the Viking horn with two of her daughters. Photo: Raiders. 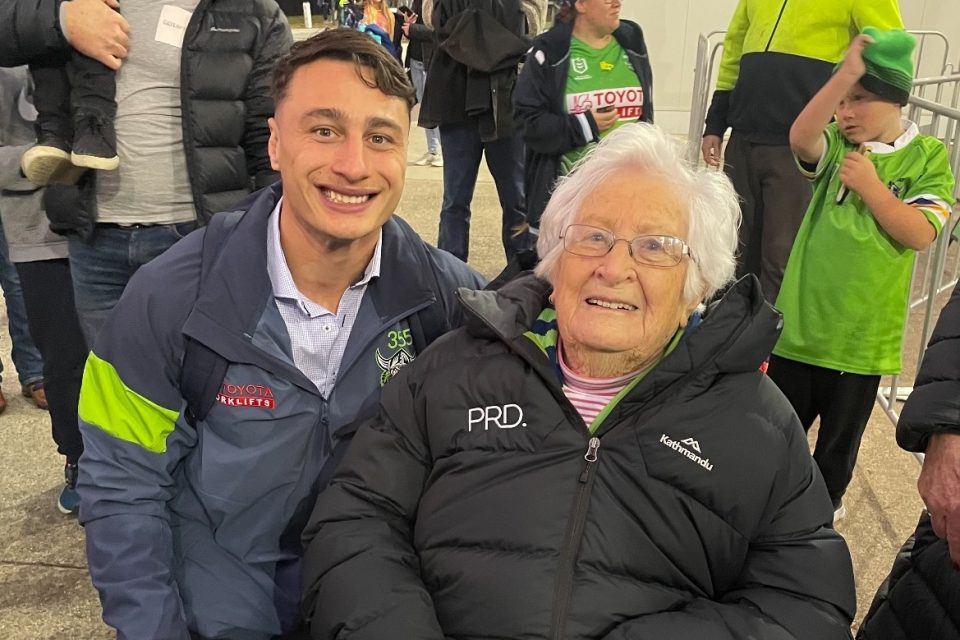 Magdalen had the chance to meet one of her favourite current players, Charnze Nicoll-Klokstad. Photo: Supplied. 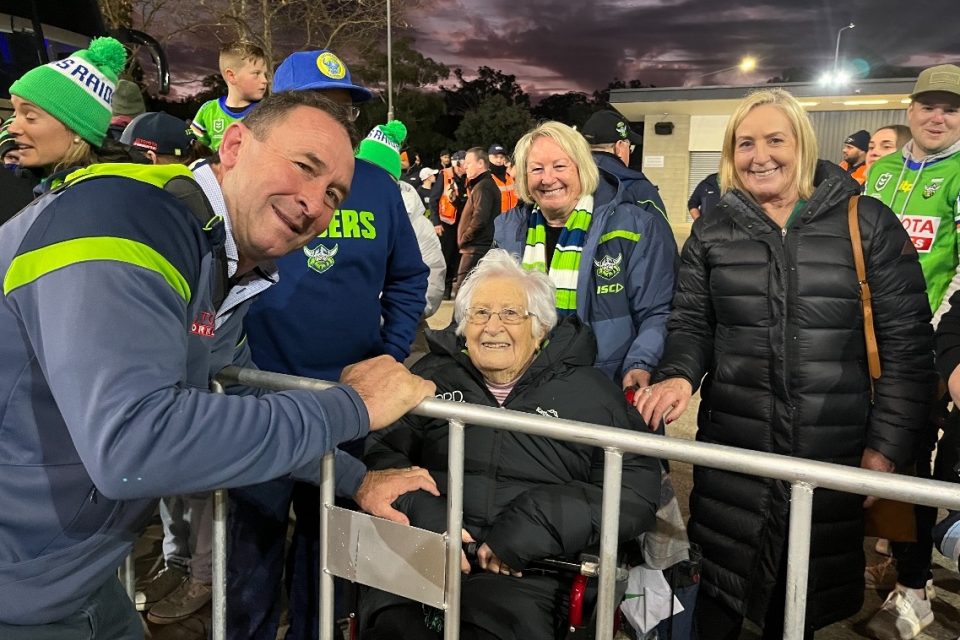 Despite a torn calf muscle, Ricky Stuart was all smiles when speaking with Magdalen after the game. Photo: Supplied 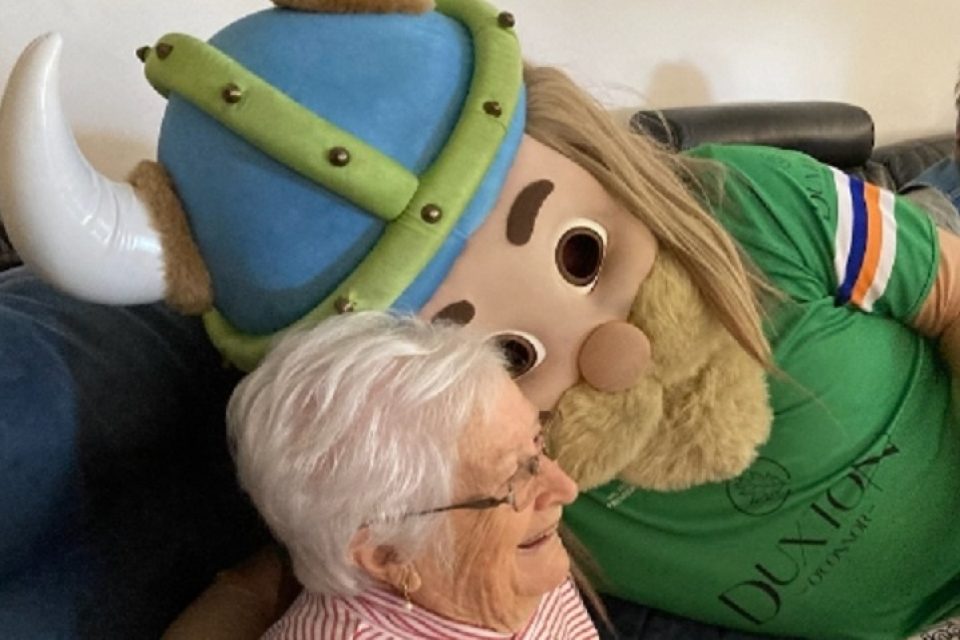 Magdalen with Victor the Viking on her 100th birthday. Photo: Supplied.

Magdalen has been a Raiders fan since the club formed in 1982 and she would wrangle her 12 children to Seiffert Oval to watch the games with a picnic. Before that, she had been a Parramatta Eels supporter.

“But when we got a local team, that’s where I stayed,” Magdalen said.

She said it was a great way to get together, meet people and have a “lovely day out”.

Most of her children have remained Raiders fans, along with many of her grandchildren and great-grandchildren.

Nowadays, the cold keeps her away from watching the games live, but she makes sure she catches every moment on television.

But her experience on Saturday was one she’ll always remember.

“They spoiled me so much. It really finished off my birthday and has been wonderful,” Magdalen said.

Absolutely amazing and still as lovely as ever

So glad she got this experience. Great effort by the Raiders to make this happen.