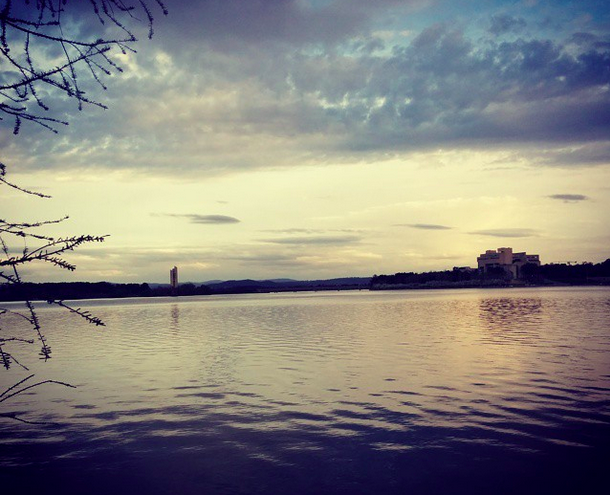 Lake Burley Griffin has had its fair share of bodies, acting as a watery grave for several unfortunate souls in the last century. Some met foul play, one woman’s body was found 14 years later and ruled as a suicide. She was still strapped into her car, basically a skeleton, but her clothes were still mostly intact and even some flesh remained.

However, legend has it that there are still some bodies down there. The people that once occupied these bodies did not meet foul play, nor was Lake Burley Griffin their first resting place.

The 1976 floods in Queanbeyan hit the Riverside Cemetery pretty badly, pulling coffins out of the ground and washing them away. It’s said that these coffins went all the way upstream and now reside in the depths of Lake Burley Griffin.

I’m not aware of any official record confirming their existence, however, I presume that if in fact they are down there they are probably decomposed and not ‘coffins’ anymore.

I’m not 100 per cent sure how many coffins were washed from the cemetery, or how many made it to the lake. I’ve heard varied numbers, some people told me they thought it was between 10 and 20, others are confident it was over 50.

As I said, I suspect they are no longer intact so even if someone went on a diving mission I think it would be highly unlikely that anything would be found – perhaps some bones could be salvaged from the mud.

Adding to the grisly history of the lake, I’ve heard stories about human waste from the morgue in Kingston being released into the water in the mid-1980s due to a plumbing mix up.

All in all, and paired with the blue-green algae and abundance of carp, the lake is looking less and less appealing… and some people swim in there!

Ive hear people say, rumors, that at least one body or bodies have been found bagged and/or with concrete attached to feet, which implies either activity of organised crime or perhaps the spy community? I have no evidence though so it may be urban legend.

The body of Kathryn Grosvenor was found in the lake weighed down by a concrete bollard which was traced back to Gungahlin. There are a few witnesses that claim they saw men loading the bollard into a ute but unfortunately this crime still remains unsolved. http://www.police.act.gov.au/crime-and-safety/unsolved/kathryn-grosvenor

There are many, many stories surrounding the flooding of Queanbeyan Riverside Cemetery – some true, some urban legends. What’s certain is that there have been a number of them of the years; the first recorded in 1852 and the other significant flood event that ‘washed away tombstones’ in 1925 (see below).
Along with the local records, there are mentions in the various books written on Queanbeyan’s past and I’ve also interviewed people who were present and/or involved during some of these natural disasters.
The floods of 1974 and 1976 are often confused because the Cemetery was inundated in both, but it was the flood of ’74 in which graves were washed away. While some information suggests as many as 200 graves were affected (rather than coffins – people were not always buried in coffins in early times), there was most certainly more than 50 and Cemetery records/research determined it was a minimum of 71 and perhaps as many as 100 (see link below for article written the following year).
The primary reasons for the discrepancy are that (a) there are untold numbers of unmarked and unidentified graves still within that Cemetery and so it was impossible to determine precisely how many had been so rudely disturbed by Mother Nature, and (b) many were never recovered.
In terms of bodies making their way into Lake Burley Griffin, I have accounts from people as highly regarded as former Federal Member for Eden-Monaro Bob Whan, of this too occurring.
A memorial erected by Council does stand in the Cemetery in honour of those who’s final resting place was known to have been so affected.

Ive hear people say, rumors, that at least one body or bodies have been found bagged and/or with concrete attached to feet, which implies either activity of organised crime or perhaps the spy community? I have no evidence though so it may be urban legend.

The body of Kathryn Grosvenor was found in the lake weighed down by a concrete bollard which was traced back to Gungahlin. There are a few witnesses that claim they saw men loading the bollard into a ute but unfortunately this crime still remains unsolved. http://www.police.act.gov.au/crime-and-safety/unsolved/kathryn-grosvenor

Yes, apparently. Although since then, there have been a few witnesses, many witnesses, , an assortment of cars in various colours, men knocking on doors, various rumours, more rumours, and over a decade since what I suspect was a botched old school-factioned style investigation that only had one theory. And when no evidence turned up to support it, we were left a family divided by suspicion, and silence ever since. There is so much I would love to ask of this investigation, though given how it ended for eastman, I think I’ll wait for someone else in my family to get fed up first. Blessings.

Nat Smith - 1 hour ago
I know people that are waiting for two bedroom houses for 7 years . They have not replaced civic Kingston or narrabundah apar... View
Food & Wine 5

Capital Retro - 2 hours ago
Bill Gates is the world's richest virtue signaler: https://www.cnbc.com/2021/02/14/bill-gates-on-his-carbon-footprint.html Li... View
HiddenDragon - 14 hours ago
Some cautionary words here about the limits of battery technology - https://www.abc.net.au/news/2021-02-16/bill-gates-zero-em... View
dulynoted - 16 hours ago
those statistics might be outdated; renewables are getting cheaper and more energy efficient every year as technology improve... View
Sport 3

JC - 5 hours ago
So so true. With social media such as this type of site and Facebook etc so many political decisions these days are about opt... View
JC - 5 hours ago
If they are renting an ACT government property and no longer have a need for a property that big then yes they should be move... View
Max Kelty - 13 hours ago
Bel Lee your housing manager mustn't be doing their job then or else processes have changed. When I was a HM at HACT people w... View
Lifestyle 26

Jacq Miller - 9 hours ago
shame there are no longer all 4 in situ View
Barry Matson - 11 hours ago
of what? View
Michael Guina - 12 hours ago
It has to start somewhere and those two buildings are living example . View
Lifestyle 13

Katrina Eadie-Bergin - 15 hours ago
Rowan Bergin I very much look forward to it ❤️... View
News 37

bj_ACT - 23 hours ago
Yes razor it’s a good point. Agree there are pockets of Tuggeranong and Belconnen that could do with some ACT government do... View
mattm - 23 hours ago
There are almost 130 Councils in NSW, and most of them do a much better job with municipal services than the ACT Government.... View
show more show less
*Results are based on activity within last 7 days

@The_RiotACT @The_RiotACT
How long since you've gone out for authentic Mexican food? Mochachos is bringing the heat to Kingston https://t.co/lsjPa6sCey (14 hours ago)