Book Launch: ‘Fire in the Afternoon’ by John Stokes 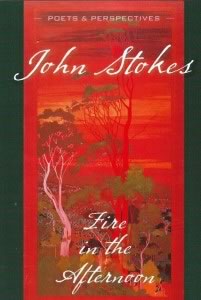 Celebrated poet John Stokes does not shy from the contentious and the harrowing, his verse evokes the plain truth about love, sex and chaos. In a clear, resonant voice Fire in the Afternoon catches the truth in the midst of the storm, his poems resonating from a life that has known joy, loss and solitude in nature.

John Karl Stokes was born on a sharefarm on the banks of the Georges River near Casula, NSW, at a place that no longer exists.He trained as a cartographer and then a land surveyor, before training and working as a town planner in London. He wrote all the while, despite being “specifically and actively discouraged from writing by Alan Sillitoe.”

His first major collection of poems and prose pieces, A River in the Dark, was published in 2003, since then he has won or been shortlisted for many major prizes, and his work has been published widely in Australia, Italy, Japan, U.K., and the U.S.A.

His work has appeared in many anthologies, journals and papers, including Antipodes, The Canberra Times; Island, Newcastle and Hunter anthologies; Meanjin, RedRoom projects; Scarp and Ulitarra. He represented the A.C.T. and Australia at the 2011 International Poetry Festival on the Lake Orta, Italy, publishing a chapbook:- Dancing in the Yard at Eden through the regional authority there and with the assistance of ArtsA.C.T.

An active member of the arts and literary community, he has been a member and a Board member of several Writers Centres, given readings throughout Australia, tutored in writing and in contract management, and represented literary communities of various colours.

He lives in Canberra and is the committed partner of the well-known novelist, Marion Halligan.

“John Stokes is a poet of light and water and the sound of women’s cries. He has a thing for the Australian landscape.” – Kate Llewellyn

Samantha Oliver - 22 minutes ago
Found these today whilst walking with the kids in Richardson View
Ray Mcgee - 37 minutes ago
Seen them around Lake Tuggs :) View
Jody Berg - 1 hour ago
Jo Martyn , you should paint some! View
Opinion 100

Margaret Edwards - 1 hour ago
That’s where I fell in love with aqua aerobics many years ago. View
Tracey Crump - 1 hour ago
Lizzie Parlane I think the pools will remain open (post lockdown) but the fitness programmes, including aquarobics will cease... View
News 12

JC - 2 hours ago
Cool story. Except that isn’t what has happened. No where near that much has BEEN spent on lightrail nor has what has been... View
nadine - 2 hours ago
Exactly, when our population was around 250k we had 3 hospitals. Our population as almost doubled but we only have 2 public h... View
whatwik - 3 hours ago
Any informed updates on schools in the ACT and Victoria planning to commence staged returns on 5 October, but NSW not until 2... View
News 23

UPDATED 3:00 pm: Year 12 students have been given the green light to return to school at the start of Term...
Community 52

@The_RiotACT @The_RiotACT
So what do you appreciate? Is it worth forming a society and telling the world via Facebook? Sure, if you're a fan of corrugated iron, fatty hamburgers and almost every kind of dog https://t.co/CxdoMCKzta (3 hours ago)