Boorowa and the Running of the Sheep 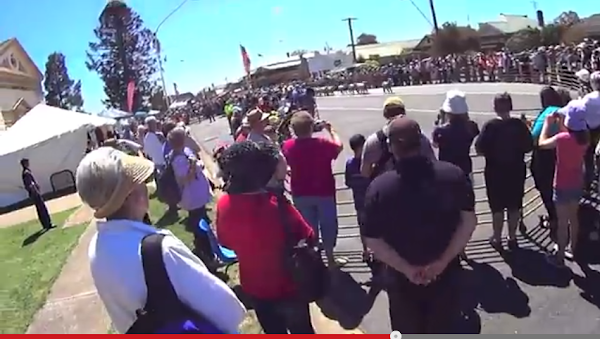 Thanks to Zan’s very helpful tip in the Wotz on guide I was aware of Boorowa’s Running of the Sheep.

Having previously been ignorant of Boorowa’s very existence I hit up Google Maps and was surprised to learn it was a mere 1 hour and 18 minutes from the Inner North of Canberra.

Thus Goosepig and I set our alarms rather early for a Sunday morning, packed our ludicrous city Kelpies into the back of her little car, and set out for the open road. 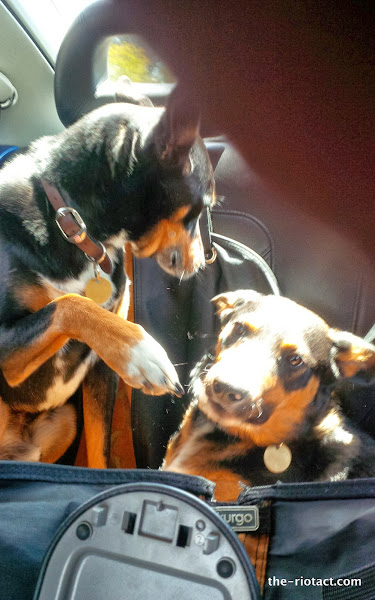 A stop at the Yass Maccas took longer than planned (a very strange crew behind the counter spanning the age gap from near infants to positive geriatrics) meant we were running the clock tight to the 12pm sharp running of the Sheep through the Booroowa main street.

Coming into town it was clear this was indeed a Very Big Deal.

Thousands of people were packing the streets and empty parking was on the very far edges of town.

But we found a spot, walked briskly to the barricades, and were well in position to see the sheep run.

Things kicked off a couple of minutes late with a swarthy young bloke dressed like a pamplona bull runner completing the course.

Was this theatre or a streaker? We could not say.

In due course the sheep did indeed come down the street, kelpies in attendance, and were smartly confined.

Our city kelpies were suitably impressed by kelpies on the back of quad bikes.

Here’s the little vid I cut together which gives a feel for the event:

Ignorant pleb. This event has been running (pun intended) for years.

Australia was built on the sheep’s back, dontcha know. And the Aborigines’ backs and a fair few Irish too. Why mention that? Because the Running of the Sheep is part of Boorowa’s Irish Woolfest.

i was underwhelmed by the number of sheep.

I started counting them, but fell asleep.

i was underwhelmed by the number of sheep.

thanks for the vid. I couldn’t get there as I was stricken with sniffles and racking cough which would’ve scared the dogs and sheep out of town. I will get there one day though.

Jose Vega - 24 minutes ago
In Spain loans for your own home is tax deductible.... Investment loans are not... Majority live in their own home. View
Joel Suryawanshi - 3 hours ago
Sarah Young we are also forgetting that the greedy real estate agents are bumping up the prices and attracting investors from... View
Matthew Beale - 14 hours ago
Sarah Young sadly it comes down to being able to buy in only very outer suburbs, if you have a deposit. It is a seller's mark... View
Opinion 91

Susie Armistead - 24 minutes ago
Um no. View
Tim Elliott - 25 minutes ago
Steve Herczeg, it's misleading to use the total area of Greater Sydney for a calculation of Sydney's overall population densi... View
Capital Retro - 28 minutes ago
If I sell my house on a large block to downsize I get no concessions on stamp duty (for the smaller place) or any other incen... View
Community 1

pink little birdie - 2 hours ago
Most of the start up support tends to be geared to that in the technology space or things with end consumer appeal. Most inno... View
Kevin Hodder - 13 hours ago
Rent, rates, stamp duty, taxes, work cover compliance ect and every thing else the act gov stings you! just so you can open t... View
Food & Wine 15

@The_RiotACT @The_RiotACT
Frugii Dessert Laboratory will close on 30 June, almost four months after the death of 'Mr Frugii'. Canberrans have been quick to share their fond memories of the iconic Braddon store https://t.co/EkZvUAF7dv (1 hour ago)