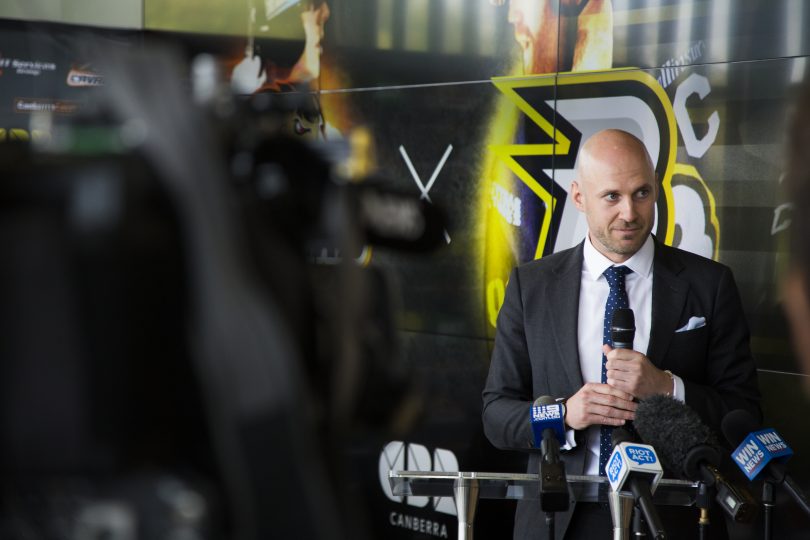 “Ice hockey is on a really exciting growth trajectory,” says CBR Brave majority owner Dan Amodio. “A sport like this … is a great fit for the Canberran lifestyle and the Canberran weather.” Photo: Coordinate.

The CBR Brave heads into the 2020 Australian Ice Hockey League season full of optimism not only on the ice, but also off it, after changes were made to the club’s ownership structure.

Daniel Amodio and business partner Donn McMichael, who are majority owners of the Canberra Cavalry Baseball Team, are now also the primary shareholders and directors of the Brave.

Amodio announced the new-look hierarchy of the ice hockey franchise after being named CEO this week. He and McMichael, who has been named chairman of the Brave’s Advisory Committee and CFO, are poised to lead a community-based ownership model which is a carbon copy of the model the pair successfully implemented in 2018 with the Cavalry.

A lot is owed to the Canberra club’s original founders Peter Chamberlain, Jamie Wilson, Warren Apps and Mark Rummukainen. All four men played a huge role in saving the Brave ahead of the 2014 AIHL campaign with the support of a great group of players and a strong community of members, sponsors and volunteers.

The club’s new community-based ownership model will allow these community members to now have some ownership of the team along with the franchise’s majority owners.

Amodio, who moved to Australia in 2013 as part of Major League Baseball’s ownership of the Australian Baseball League, became involved with the Brave just before the start of the 2019 season. He explained that the franchise went through an adaptation phase to reach the point they are at now.

“The Cavalry staff and I got involved with the Brave just before last season as part of the transition of ownership. We wanted to get to know everyone around the business and wanted to meet the community as early as possible before it all happened,” Amodio said. 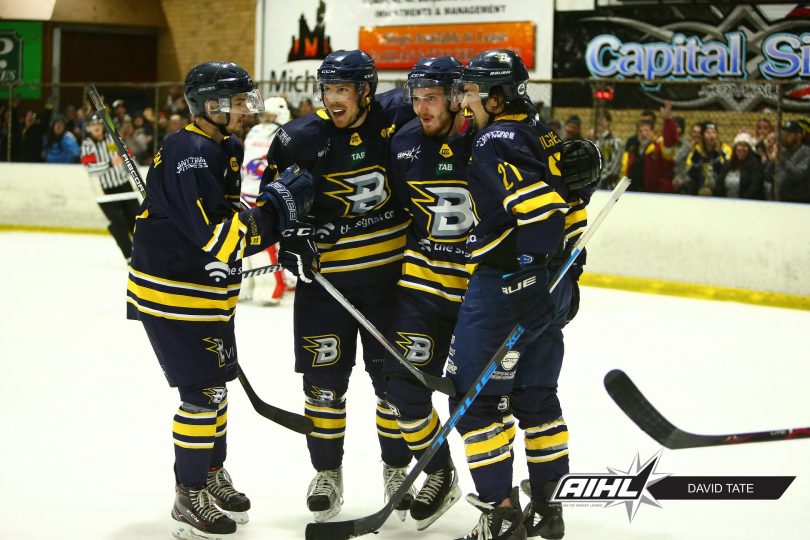 The CBR Brave await the 2020 AIHL season, which kicks off in April. Photo: David Tate.

“I was just so impressed with what they have created. From a fan experience standpoint, it is an incredibly unique experience and I was amazed at how passionate their membership base is. From the first game I went to, I was very attracted to what was obviously a very special organisation.”

Using the same ownership model from the Cavs to the Brave was seen as a good opportunity to hand the club over to professionals after a lot of hard work had been put into building the Canberra club’s brand.

“Through conversations with Donn and the Brave’s founders, we learned that they were looking to transition the company into new hands,” Amodio said.

“They did such a good job building the company, which they did largely as volunteers, and it grew to a point that it became too big for them to manage. They were looking to put it into the hands of some professional sports administrators to help it grow so it was the perfect match.”

While there is an excitement for the model change going forward, there is still glowing respect for the volunteers.

“They deserve so much credit for what they have done for this organisation. They have created an exciting brand and a really exciting product,” Amodio said.

Having such strong community bases is something Amodio thrives off and his involvement with the Cavs and Brave ultimately provides experiences you don’t see anywhere else.

“There are so many similarities with the communities involved but it really all comes down to the passion they put into it,” Amodio said.

“The best example of it is in both of our sports, which is very unusual in professional sports, the players get to and from the locker room by walking through the crowd. It’s easy to look at this as a limitation of the venues but it actually creates the most exciting and personal relationship between the players and the fans. It’s a small example and a great symbol for what our organisations are all about.”

Amodio believes ice hockey is continuing to grow in the ACT and that the sport really moulds into the Canberra way of living.

“Ice hockey is on a really exciting growth trajectory,” Amodio said. “A sport like this fits the Australian way, it is a great fit for the Canberran lifestyle and the Canberran weather. The local association is doing a nice job in attracting more people to the sport and we hope we can help in that mission”.

My favorite Brave memory has got to be our maiden Goodall win. I had a huge work opportunity that I couldn’t pass up and missed most of the weekend. I ended up being taken as a life size poster (a copy of which now hangs in a loungeroom in Canada!) I brought a plane ticket last minute, got on the plane with the Brave up 2-0, landed in Melbourne and scores were level, directed the taxi driver to the rink, walked in to a wild cheer as the puck dropped for overtime and was behind the Brave bench for the OT winner!

My fav memory is of my 1st game at the brave cave, squeezing in with the crowd, squeezing in a good possie and soaking in the amazing atmosphere as the game unfolded.

Annalise Rae lets go so I can have memories

Xtiney yessss we must! It’s so fun (and smelly, the steam literally wafts off the players as they squeeze past the crowd!)…my fave memory from the Braves last game I was was when the puck came soooo close (there’s a net at face height thank goodness) and I squealed so loud the MC was like “woah nelly!” fingers crossed you win this 🏆

My favourite Brave memory?
That’s a tough call, being there for the 2018 championship was amazing, but, I don’t think it’s as good as finding out that we still had a team back in 2014. 🙂

Being at OBGA when Trevor Gerling scored the goal in overtime in the 2018 grand final. Best atmosphere at an away game I’ve ever been too.

My Hockey involvement started quite a few years ago firstly as an unpaid chauffeur, then Team Manager, Junior Coach and then President for my four sons travelling the countryside and the world. Its fair to say in nearly 20 years I have been to a lot of hockey rinks all over the world. USA, CANADA, RUSSIA,SWEDEN NEW ZEALAND just to name a few of the big ones. NOWHERE in the WORLD Is there ANYTHING LIKE A HOME GAME AT THE BRAVE CAVE, either playing for or against and we have done both. Never did I imagine we would be permanently based and playing in Canberra some 2 & a half hours drive away ( I wish I kept my Pilot’s license) and now we do not want to go anywhere else. So long as our sons are welcome, and contributing and enjoying the game in Canberra we are here to stay. Many thanks to all at the BRAVE and to the welcoming fans that have become family at the CAVE. GET THERE AND SEE FOR YOURSELVES. THERE IS NOTHING ANYWHERE IN THE WORLD LIKE THE ATMOSPHERE HERE.my fave game a home game in 2017 when ALL 4 Kubara boyz played

Spending beautiful Canberra nights with my best friends, chanting A! C! WHAT? A! C! T!

Congratulations! You are our winner for this giveaway. Please check your messages for the prize details.

I still remember my first game. My wife, our friend, and I decided at midday on a Saturday to drive from nowra to Canberra to watch our first ever game of ice hockey and see what it is all about. We booked our tickets online as we drove. We arrived just as the puck was about to be dropped and the game was incredible. The atmosphere in the brave cave was phenomenal, the speed of play was so hard to keep up with. And we topped it all off with dinner at Grease Monkeys. That’s was four years ago, and we keep driving out every Saturday we can to watch games and we love it