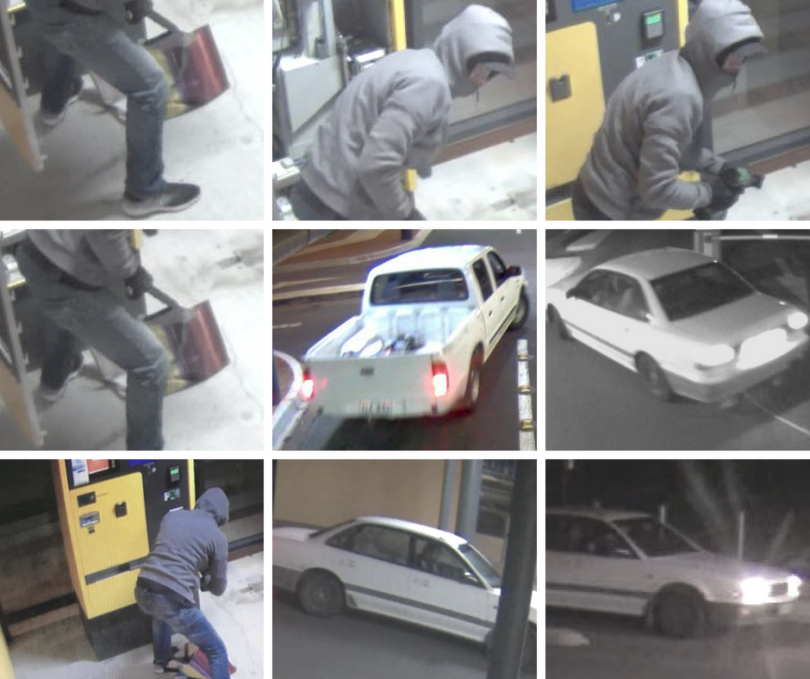 Images from CCTV footage of a man stealing from ticket machines at Canberra airport. Images supplied by the AFP.

A ‘brazen’ offender has been regularly stealing money from Canberra Airport car park ticket machines over the last 12 months with police calling for public help in identifying the man.

The Australian Federal Police said that cash has been stolen from a variety of ticket machines at Canberra Airport and the Majura Park parking precinct during several incidents over the past year.

The thefts are now occurring on almost a weekly basis and have resulted in significant damage to the car park ticket machines.

Canberra Airport Police Commander, Sergeant Craig Fontana said information from the public would be very useful in stopping the thefts.

“These attacks have been extremely brazen so I’m sure someone can assist with the identification of the alleged offender,” Sergeant Fontana said.

“Any information the public can provide, however small, will be useful in stopping these thefts now occurring almost weekly.”

The CCTV footage also identified two vehicles linked to the offender – a white ute (thought to be a twin-cab Holden Rodeo or Ford Courier) and a white sedan (possibly a Mitsubishi Magna).

Police are asking anyone who has information that could assist them to contact Crime Stoppers on 1800 333 000, or via the Crime Stoppers ACT website.

Information can be provided anonymously but please quote reference 6283677.

Anyone find it ironic that the Airport group have been complaining about people stealing their parking money, when they have been stealing parking money from customers for years?

The company I used to work for moved out of Tuggeranong (the building remains mostly empty for a decade) for the subsidised office at the Airport. Suddenly I couldn’t catch a Bus to work any more and had to pay for a new car and exorbitant daily parking charges at the Airport business park.

The growth in the airport as an Employment hub, coincided with a slowdown in jobs growth in Tuggeranong. It was no coincidence, as both Territory and Federal governments pandered to the airport owners with road funding and staff shifting from areas like Tuggeranong. Government made the Airport owners rich at the cost of Canberrans in outer suburbia.

this has been going on for a year and yet the offender hasn’t been caught? something’s not quite right. how hard is it for the police and/or security guards to be stationed somewhere near the machines waiting for the offender?? what am I missing??

I don’t support crime, but I think this is the least important crime happening in Canberra and Police have better things to do with our resources.

Afp is also the police force for Canberra

https://www.canberratimes.com.au/national/act/police-call-for-help-to-identify-alleged-electric-bike-thief-20180718-p4zs4m.html… and is it just me, or does this guy have the same grey hoodie as the elec bike thief?

You may be right… I suggest staking out local Kmarts where they both bought the hoodies, probably catch both of them then!!! 🙂

Ahahahahaha. This crime is funny.
With terrorism, bikie violence, and the disorganised crime wave of the last 3 years, I’m amused that our super-well-funded cops are entirely incapable of protecting a supposedly safe and secure site (like an airport) from becoming a playground for this crim. FOR A YEAR.

So much for a high security complex

It would of course be churlish to chuckle at the victim’s misfortune.

Pretty good security. Makes me feel really safe parking my car there even with the extortionist fees charged.

Pierson Blake yea not really my field so sorry if I don't know the correct name .... but seems like a fairly simple plan if it's happening regularly ?! Lol

Albert Jacka - 4 minutes ago
If you can’t PAY you can’t STAY View
Matt Jakab - 6 minutes ago
The author makes some sweeping generalisations about lessors, particularly around the claim that being a landlord is about be... View
Nathan Stack - 21 minutes ago
Tenants' Union ACT we litteralty just had this done to us in the middle of a pandemic because we wanted possums removed from... View
News 48

Nazmul Hasan - 5 minutes ago
Very sad. Is there any alternatives of this approach?... View
News 5

Mike of Canberra - 28 minutes ago
John, I live in a street that is predominantly public/social housing and, frankly, it has been a blight on my life for many,... View
John Ryan - 2 hours ago
How do I join the Ainslie Residents' Assocation? I'm an Ainslie homeowner and I'm devastated at this outcome. It doesn't repr... View
John Ryan - 2 hours ago
My house is in Ainslie and I agree completely with HSewell. Disappointed that the so-called "Ainslie Residents' Association"... View
Community 9

Amie Doolan - 34 minutes ago
Where have these 50 people been housed? Are there local families taking them in, are they living in hotels or have they been... View
Helping ACT - 1 hour ago
Roseanne Howes I am proud of Slabsforheroes too. A history written by them couple of years ago. I am part of them.... View
Helping ACT - 1 hour ago
Hi Jenny thank you. Let us keep helping. Humanity needs it. View
Property 32

Aaron Nicoli - 1 hour ago
It’s also so much safer now… 60km/h jam brakes on for the camera, accelerate back out to 60… It’s achieved nothing fo... View
Phil Hogan - 2 hours ago
Got to pay for the tram 🙄 View
mark boast - 7 hours ago
Is a speed limit a “never exceed” or a permissible maximum plus/minus 10%? Cameras don’t image opinion. Time to move on... View
News 3