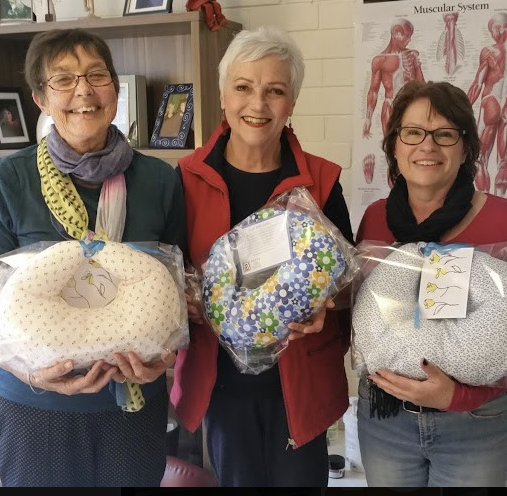 From left: Anne Marks, Megan Evans and Stephanie Goulstone with the breast care cushions made by the Zonta Club in Canberra (photo taken before social-distancing recommendations). Photos: Supplied.

Do you have some spare ribbon that you want to put to good use?

A group of Canberra women are looking for extra ribbon that can be used to complete the making of breast care cushions that provide comfort to women and men after breast surgery.

The cushions also sit close to the hearts of many in Canberra and the surrounding region.

The breast care cushions, made by members of the Zonta Club in Canberra, sit under the arm and prevent rubbing on the scar left from breast surgery.

The club, known as the Zonta Club of Canberra Breakfast, is one of two Zonta clubs in Canberra and is part of the Zonta international movement that aims to empower women through service and advocacy.

While there is an abundance of material to make the cushions, the club of Canberra women (some of whom are non-members who have recovered from breast cancer) is running short of the ribbon used to attach the cushion at the shoulder.

Zonta Club Canberra member Stephanie Goulstone said their members and volunteers have made more than 480 cushions in the past year. The cushions are donated to breast care nurses at Calvary Hospital who distribute them throughout Canberra and further afield to Wagga Wagga and the surrounding region.

Ms Goulstone said the cushions become part of a person’s journey with breast cancer and also part of the recovery as they can also be used as a travel pillow. 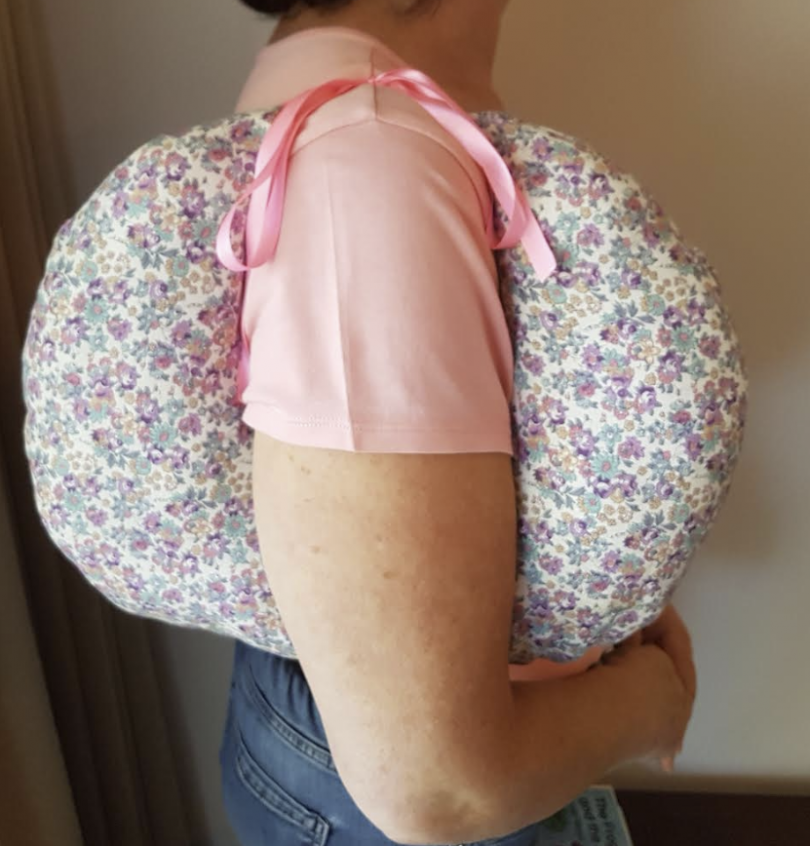 The breast care cushion sits under the arm and prevents rubbing on a scar from surgery. But the ribbon is in short supply.

“Each cushion comes with a message from us and some details of how they were made. We don’t ask for money but quite often we’ll receive a donation and some lovely messages back saying how thoughtful they are.

“We also receive some funding from the John James Foundation which we use to purchase the fabric, stuffing and plastic wrap, along with maintaining our sewing machines,” she said.

“We make the cushions out of brightly coloured fabric and we try to make them nice enough that people can use them afterwards as a travel pillow. I know one lady who keeps the cushion on her bed.”

They recently did a deal with a store in Cooma to secure the store’s excess fabric, so while there is plenty of fabric, they just need extra ribbon.

The club is also considering making heart-shaped cushions for health care workers who have been nursing patients with coronavirus.

“We have a bunch of volunteers who are cutting the fabric and getting them ready to be sewn. Some just do the cutting, some do the sewing, so it’s a very hands-on experience for us.

“We put a little note on each cushion saying where it has come from, and then they mainly go to Calvary Hospital, but I recently posted one to a friend who has breast cancer in the UK,” Ms Goulstone said.

The first breast care cushions were made in Sydney in 1994 when a Zonta Club member from Botany Bay wanted to help a friend who was recovering from breast surgery.

The concept captured the club’s imagination, and by the year 2000, clubs throughout Australia became involved.

The project came to international attention in 2006 during a Zonta conference. The cushions are now being made by clubs overseas, including in the United States, Canada, Germany and Macedonia.

You can find more information about Zonta clubs in the ACT district via their website or the Zonta Club Canberra Breakfast Club Facebook page, or email stephaniegoulstone@gmail.com. 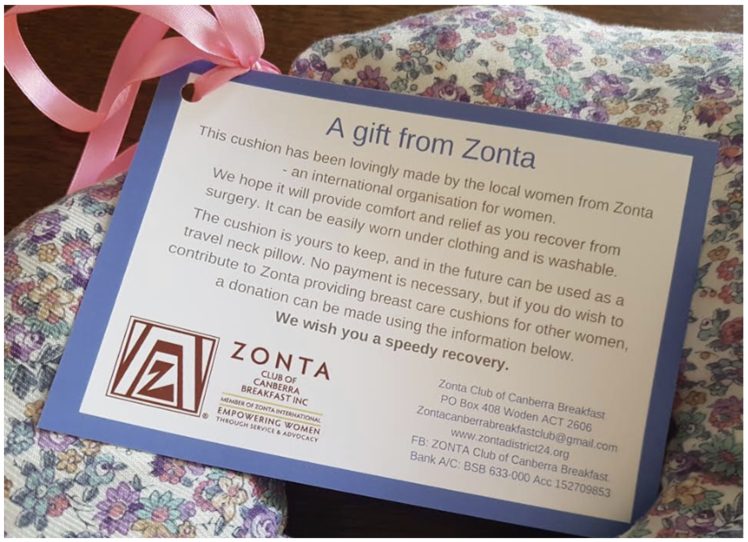 Each breast care cushion comes with a special note.

Kalo Arepo - 14 hours ago
Were they trying to jump the queue? View
Smackbang - 23 hours ago
How about you stop passing judgement on someone you know precisely nothing about? View
Community 15