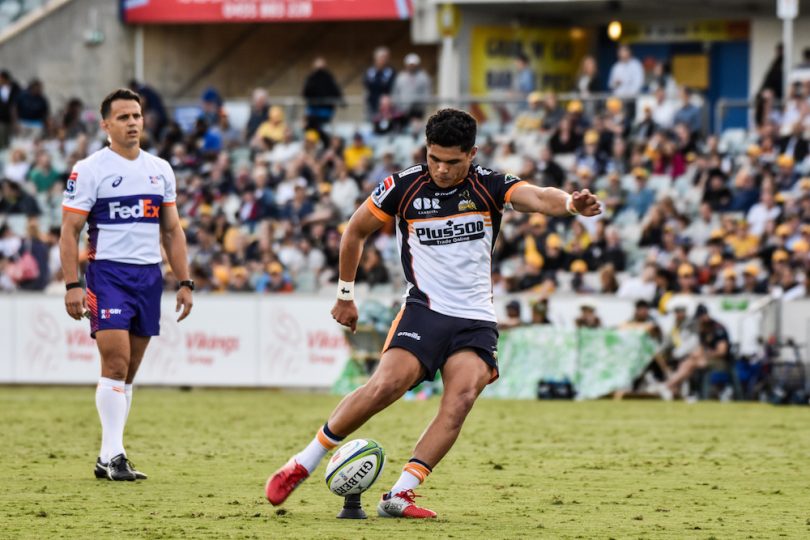 In his boldest selection decision in his short tenure so far as Wallabies coach, Dave Rennie has elevated Brumbies fly-half Noah Lolesio to the starting lineup for tonight’s third Bledisloe Cup test at ANZ Stadium in Sydney.

Rennie has made five changes to his starting 15, with two forced through injury.

With James O’Connor ruled out with a knee injury and Matt To’omua out with a groin strain, Lolesio and Brumbies teammate Irae Simone have been selected at 10 and 12 to make their test debuts.

With fellow Brumby Nick White at halfback, there will no problems with continuity.

For 20-year-old Lolesio, it has been a remarkable rise, establishing himself in the Brumbies starting side before leading the side to the Australian Super Rugby title.

He spent the first Bledisloe Cup test in Wellington on the bench, while he wasn’t in the 23 for the second test in Auckland.

Dave Rennie though had no hesitation putting him straight into the playmaker role alongside Simone.

“Noah and Irae played a lot of footy together,” says Rennie, “And we have no doubt they are ready for the step up to Test rugby.”

There are five Brumbies in the Wallabies starting side and one on the bench.

Fullback Tom Banks is out of the 23 altogether with Dane Haylett-Petty starting at 15.

Alan Alaalatoa returns to the starting side in the front row for the first time this season for the Wallabies. Brumbies teammate James Slipper is also in the starting lineup for his 99th test.

Scott Sio is on the bench.

The Wallabies will be wearing their First Nations jersey for just the fourth time.

It’s a must-win game for the Wallabies in the four-test Bledisloe Cup series with the All Blacks leading one-nil after winning the second game. The first was a thrilling 16-all draw in the opening test in Wellington.

The All Blacks only need to win one of the remaining two tests to retain the Cup.