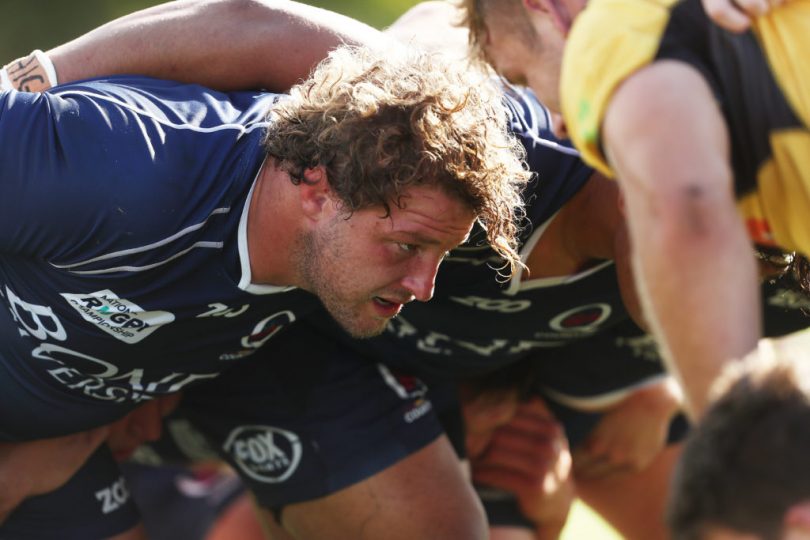 James Slipper in action for the Queensland Country in the NRC. Photo: Supplied by Brumbies Rugby

Former Queensland Reds skipper James Slipper has signed a two-year deal with Brumbies after the Super Rugby side threw him a lifeline to get his career back on track in the nation’s capital.

Having played all his 104 Super Rugby games with the Reds, Slipper makes the move to Canberra looking to rekindle the form which made him one of Australia’s best performers, following his two-month ban for violating Rugby Australia’s illicit drugs policy.

Slipper twice tested positive to cocaine, was suspended for two months by Rugby Australia, slapped with a $27,500 fine, and was put on the outer from the Queensland Reds side.

But head coach Dan McKellar is confident Slipper has taken the right steps to work on his challenges and is confident he will not be a problem for club culture when he arrives in the capital.

“We also understand that the last 12 months have been a challenging time for James and his family. However, following several meetings and discussions with James it is clear he is now in a very good head space and is highly motivated to get back to professional rugby and prove a point,” McKellar said.

“We believe that James will benefit from being a part of the Brumbies culture and environment and receive the support he needs to succeed. Something the Brumbies have always done is provide people with opportunity and we feel that this is what we are offering James – an opportunity to get his career back on track and improve and grow as a player and a person.”

The 86-times capped Wallabies prop made his debut for both club and country in 2010 and took no time in establishing himself as one of the best props in the world. Ferocious at scrum-time, with superb skills in the loose, and capable at either loose or tight head, Slipper is the quintessential modern front-rower.

The signing of the 29-year-old adds to a Brumbies recruiting-list which includes Pete Samu, Toni Pulu, Irae Simone, Murray Douglas and Tom Wright.

Slipper will finish the National Rugby Championship season with Queensland Country before joining the Brumbies for pre-season training in November and is grateful for the Brumbies lifeline.

“The Brumbies have always had a long history of making players better through their program, so to get a chance to be a part of that is very exciting and something I am looking forward to,” Slipper said.

“When I spoke with Dan about 2019 and beyond I was very impressed and cannot thank both him and the Brumbies organisation enough for the opportunity to take my rugby career forward with them.”

The Southport School product made his much-publicised return to rugby during the Wallabies pre-Bledisloe Super Rugby trial, where he impressed many with his work rate and desire in defence.

Slipper has brought that demeanour into the NRC, playing a key-role in Queensland Country’s impressive start to their title defence, putting in a brilliant man-of-the-match performance against the Canberra Vikings at Viking Park.

The versatile front-row was in superb form when Vikings met Queensland in the opening round of the NRC and will join what is an already strong stock of Brumbies props for the 2019 Super Rugby season.

The Brumbies begin their Super Rugby season on Friday 15 February 2019 with the Rebels the visitors to GIO Stadium in Canberra. Memberships for the season are on sale now with a range of options to suit all budgets. Click here for more information.

Ashley Latimer - 52 minutes ago
Jay Annabel yes we have a smaller number of deaths from covid because we locked down. Why did we lock down? Because it's more... View
Jay Annabel - 57 minutes ago
Ashley Latimer Compare the fact that almost 1000 people died of the flu in 2019 and we didn't care (and you probably would ne... View
Ashley Latimer - 1 hour ago
Are you trying to imply that a covid-19 vaccine somehow has the same efficacy as a fully developed influenza vaccine which ha... View
Community 5

Capital Retro - 1 hour ago
I recently discovered some old papers belonging to my late father. Among them was an "Identity Card" Form C.R.3 which was iss... View
Hans Dimpel - 4 hours ago
Tod Davis which rules and who is speaking them? Are you sure you aren't being influenced by rightwing conspiracy pages with a... View
Hans Dimpel - 4 hours ago
a world full of rainbows and unicorns would be good. sounds nice.... View
Community 9

Phil Tarrant - 2 hours ago
I remember similar ones from when I was a kid in the seventies, they were sometimes out in paddocks and I saw one that was br... View
bikhet - 2 hours ago
This seems to be your thing. Never knew the pluviometers were there. Is their output available on the web somewhere? I'm a bi... View
brendan eyers - 4 hours ago
Cool to know what the cubes are, though I've never noticed one. Worth a mention that there are a hundred or so pluviometers a... View
Property 2

chewy14 - 3 hours ago
"A responsible and competent government would" Well there's your first problem. They haven't been forthcoming with robust bus... View
michael quirk - 5 hours ago
The government has yet to provide evidence to justify the light rail extension, the viability of which is tenuous given incre... View
Community 2

@The_RiotACT @The_RiotACT
Chief Minister Andrew Barr has reported the ACT has 19 new cases of COVID-19. At least 13 of these cases spent time in the community https://t.co/4cbXjwv6ex (33 minutes ago)