In a game befitting the two top sides in Australian Super Rugby, the Brumbies withstood a spirited fightback from the Reds to secure the Super Rugby AU title at Canberra Stadium on Saturday (19 September).

A superb performance from 20-year-old Noah Lolesio, including a 49th-minute drop goal, helped give the Brumbies the edge in front of a COVID-19 capacity crowd of 6000 at Bruce.

Lolesio had not pulled on his competition boots in over two months after a hamstring injury, but coach Dan Mackellar’s faith in the man of the match was well-founded.

Captain Allan Alaalatoa, who paid tribute to an outstanding team culture after the match, also played a powerful role in his team’s victory.

The Reds fought hard and came close to snatching the match in the dying moments, but struggled throughout in the lineouts, often falling foul of referee Angus Gardner.

The Brumbies gained the ascendancy early following tries to Folau Faingaa from a rolling maul before winger Andy Muirhead crossed to put the home side in front 15-3.

The Reds responded with an opportunist try created by Jordan Petaia and finished off by Number 8 Harry Wilson. Fly-half James O’Connor kicked a penalty goal on the stroke of half time and the Brumbies led 15-13 at the break.

The attacking intent from the Brumbies continued in the second half with Lolesio playing a key role on his return from injury. The Brumbies looked to have an unassailable 15 point lead following a try to fullback Tom Banks and the boot of Lolesio.

But the Reds, led by prop Taniela Tupou, O’Connor, Wilson and skipper Liam Wright fought their way back into the contest on the back of a dominant scrum and physicality at the breakdown.

Lock Angus Blyth pounced on a loose ball to score a converted try and the Brumbies’ lead was reduced to five points. In the dying minutes, Queensland had their opportunities but the Brumbies defence lifted.

The result was in doubt even after the siren until Banks kicked the ball into touch to finish the game. But the Brumbies had triumphed 28-23 to secure their third Super Rugby title, alongside the trophies from 2001 and 2004.

It’s hard to determine how it will be judged in the future given this year’s title won by the Brumbies featured Australian teams only.

But having commentated on the previous six finals the Brumbies have played in, from my viewpoint, it was as intense as any of the previous finals with both sides rising to the occasion.

READ ALSO From Brumbies to the bush: Josh Mann-Rea finally gets a grand final win

It’s been a year bedevilled with disasters, beginning with the catastrophic bushfires that threatened squad member Ryan Lonergan’s family farm at Williamsdale, and the subsequent appalling air quality that forced the Brumbies into a preseason preparations in Newcastle, almost 500 km away.

The pandemic followed in short order and there was even a bout of mumps in the team camp. Pulling together a grand final in front of a home crowd will be sweet relief for both the team and Canberra’s rugby community. 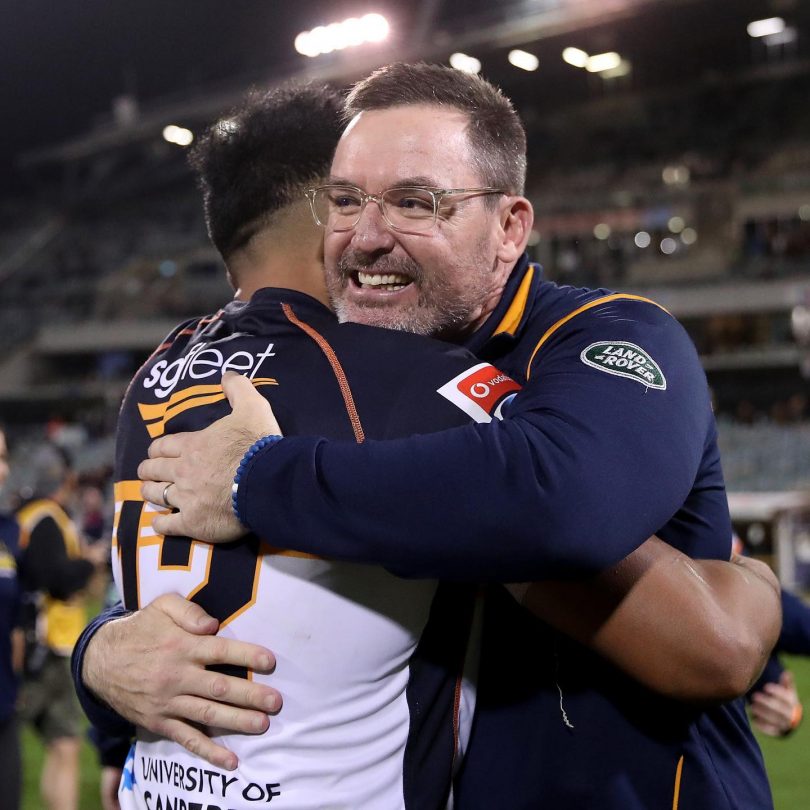 It’s also an important endorsement for coach Dan Mackellar, who only this week was revealed to have turned down an opportunity to become the Wallabies’ forward coach in order to focus on the home town boys.

Thirteen Brumbies players will now head to the Hunter Valley to go into camp with the Wallabies while a number of the players not in the Wallaby squad will return to the ACT John I Dent Cup for the last round before the finals.

Good call Tim and well done to the mighty Brumbies.