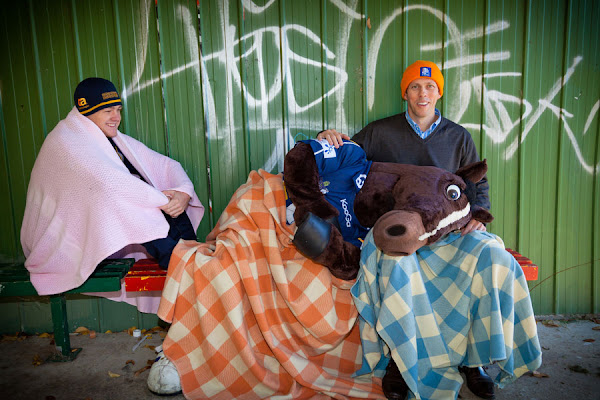 This in from Vinnies:

Brumbies Rugby Chief Executive Andrew Fagan will soon have to leave the comfort of his own home to sleep it rough in the cold outdoors.

Fagan hasn’t yet been evicted from his home, but he has stuck his hand up to be part of the CEO Sleepout aimed at helping fix the problem of homelessness in the ACT region and beyond.

He was joined by Brumby Jack and Academy player Lindsay Crook today to promote the event and make a change for the better.

“It’s a scary statistic that we have over 1000 homeless people in Canberra. I was surprised to find that 45 per cent are under the age of 25,” Fagan said.

“I think we all take our creature comforts for granted and I am sure that the Vinnies CEO Sleepout will be a real eye-opening experience for everyone involved.”

Fagan will experience what it’s like to spend the night in Canberra’s bitter-cold winter with only the comfort of three pieces of cardboard, a sleeping bag, and a cup of soup.

The Vinnies CEO Sleepout is being run nationally for the second time, following the event’s success last year where 111 leaders in Canberra slept out and raised $354,000.

This year’s CEO Sleepout will take place on Thursday, 16 June at the National Museum of Australia, in the Garden of Australian Dreams.

“I really believe that this event changes the opinions of homelessness and we all have a part to play in solving the issues surrounding homelessness in our Canberra community,” he said.

Visit www.ceosleepout.org.au to nominate your boss or to donate.

It might explain recent goings on if the horse has been running the show.

Jon Billows - 4 hours ago
Shane Jasprizza respectfully disagree on all counts View
Josh Wilko - 7 hours ago
Mountain biking View
Shane Jasprizza - 20 hours ago
We have some of the best beer, wine and spirits producers in the country. View
News 17

A woman has died after being pulled from the water at a beach on the state’s south coast yesterday. Just...
Food & Wine 9

Rare treasures up for grabs at Yass Vinnies’ auction

@The_RiotACT @The_RiotACT
The ACT is expected to continue its 30-year run of uninterrupted economic growth with the territory expected to grow by 2.4 per cent this year https://t.co/OpgxruIxe1 (2 hours ago)