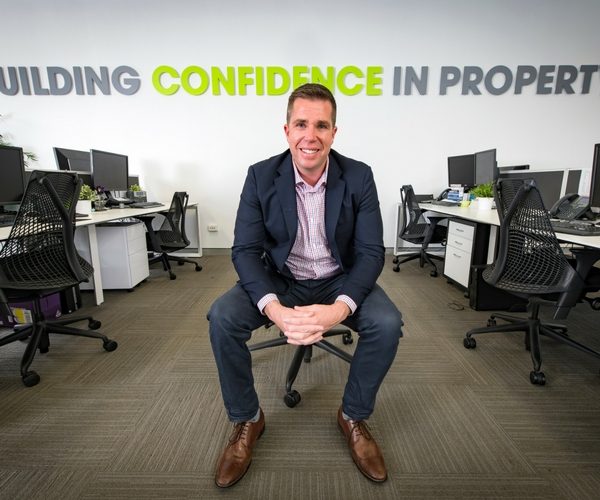 This week I was referred to a young business owner who is achieving extraordinary growth in his business; Robert Lowe of ACT Property Inspections is bucking the trends.

Robert was raised in an entrepreneurial family as one of six children, (five of them boys), and his Dad and one brother are in the building business. Mum owns Hansel & Gretel in Philip (great coffee there!). When he left school Robert did an apprenticeship in his father’s carpentry business, (school was fun, he says, but not the academic side), and he already knew he would have his own business one day, but not sure what it would be. For years, the ideas kept popping into his head and he recorded them. That’s trait number one of an entrepreneur.

Yes, Robert is an ideas man. He is creative. He is practical. He is a skilled builder and he is a fast learner with intuitive know-how about how to run a business effectively, take measured risks and get help from the right people whenever it is needed. Many of the other traits of entrepreneurs!

Setting up the property inspection business was a steep learning curve too. In 2011, he and his wife Emma, saw an opportunity in the market in Canberra when serendipitously, his mum was selling her house and there was a property inspection done for the sale. She suggested that Robert should have such a business, so the seed was planted in 2011. Robert and Emma planned the whole thing, building a website (whilst he was a building foreman and she was in the public service), and building the foundations for this new business. Then, it was a matter of talking to a few agents who might be willing to give them a go. It took about a year to launch, as Robert had to get the appropriate accreditation and needed to learn much about building inspections, because he tells me that it’s quite different to being a builder (it’s like comparing an electrician and a plumber – both tradies, but with completely different skillsets).

By sheer luck, their first two clients were a couple of the best real estate agents in town and helped to kick-start the business, entrusting them with the work, even before they thought that they were ready. The business grew from planning to running, to being profitable very quickly.

“When we first started I thought if we could only get one or two inspections a week, I’d be ‘chuffed’, but we had 3-5 very quickly, then 20, and the business soon grew to many more than that, and today we have over a third of the market share in Canberra.”

It’s been an exciting time of growth, which saw us moving from an office in mum’s house, to a bigger office (a makeshift garage) in our own home, and now to our current premises in Philip. We’ve built up a trusted team of inspectors (who are also licensed builders), and we take the time to do thorough inspections.

Some of Robert’s creative ideas have been innovative, unique and oh, so effective.

Robert had the idea at Easter time to have an “egg cracking” competition for his real estate clients. He loves his clients and the idea was about “adding value” in terms of a good experience. The egg-cracking was supposed to be a social media competition and he asked his clients to film them creatively cracking the chocolate eggs for Easter and posting onto Facebook. The most organic (not paid) likes won the competition. It went viral. Robert understands that his number one job is to look after his clients and his enthusiasm for them bubbles through our conversation.

But Robert also knows that it’s not enough to be creative; you also have to be practical. He’s become a numbers man and has developed templated systems as the business developed, so it’s measurable, and there’s quality control. He’s implemented strategies to improve efficiency. Today, ACT Property Inspections has a third of the market share in Canberra. There are between 12-15 building inspection businesses in Canberra and he has 34% and driving to 40%.

In 2016 ACT Property Inspections won the ‘Service Provider of the Year’ award by the Real Estate Institute ACT (REIACT), (no surprises there), which is a major accomplishment they are proud of.

There have been lots of lessons learnt along the way of course. It’s about innovation. We have learnt other lessons along the way – it’s about EQ more than IQ. Hiring the right staff and giving them the freedom to shine was vital.

Robert loves his business – and that’s what it’s all about – the journey of entrepreneurship.

We were so disappointed in the building inspection on a recently purchased building contract that we paid for our own as well as the compulsory contract one. For $150 less, second inspector was far more diligent and provided photographic evidence. Buyers who can demonstrate that the contract report is manifestly inferior to their additional one should not be required to pay twice!

Well done, Robert – your reputation in the real estate industry precedes you! Looking forward to watching the business sky rocket over the next year.

Mark Bailey - 12 minutes ago
The "new" buildings are no better than the ugly Dickson flats that got knocked down. View
Samantha Webb - 13 minutes ago
Go Shannon!! Fab news!!!!! We need to get back our mojo. Tim Ross discusses Canberra’s architecture in his telly shows. We... View
Alessandra Whiting - 40 minutes ago
Edgar Sharp I don’t know either but you can see them if you look at house sales. Houses built only a year or so ago and yet... View
News 1

Mark Huppert - 1 hour ago
Does it matter if ACT is number 1? What matters is whether ACT kids are developing good verbal, mathematical, problem-solving... View
Business 1

Robin Tennant-Wood - 2 hours ago
I hope, in the interests of animal welfare, they also have a range of non-meat options on the menu. :-) View
Tricia Hopkins - 2 hours ago
Everybody go to this cafe ... not only is the food and the vibe great ... your supporting animal welfare too . Win win View
Zoya Jasmin - 7 hours ago
Chris, no big deal, Charlie is famous. View
News 5

Erehwon Erehttou - 2 hours ago
The government put a cap on the amount that they would fund universities a year or 2 ago. So if we are talking about domestic... View
Bill Pappas - 7 hours ago
Robyn Holder always look to the govt to bail them out.... really.... this was no problem several years ago when unis were set... View
Opinion 78

David Aked - 3 hours ago
No. A sensible gov does wired as much as possible. The only thing wrong with it is aesthetics. But given all the ugly buildin... View
Bill Arnold - 4 hours ago
A sensible Government would have been wire free from Day 1. View
Tijana Delov - 4 hours ago
We are a small enough city to implement new innovative technology...why are we investing so much money in an old fashioned li... View
Sport 1

Amanda Fisher - 5 hours ago
Gin - is this something you and Vern might be interested in? View
Business 1

Vander Leal - 5 hours ago
Better than try to move everyone from every corner of Canberra to Civic is to spread the businesses. Like... how... it... was... View
News 185

Grail - 7 hours ago
Is there anything preventing the ACT establishing their own police force? View
Lifestyle 7

When corporate landlords dream at night, they dream of buildings like Garema Court. Fronting Garema Place, the landmark block in...
Opinion 78

Opposition leader Alistair Coe has asked Canberrans to have higher expectations ahead of this year’s election following the Government’s budget...
Opinion 78

Bucking the trends in business – Sold on Styling

@The_RiotACT @The_RiotACT
Ever wanted to learn more about the ancient art of blacksmithing? Here's your chance https://t.co/eC68rjwDBK (1 hour ago)

@The_RiotACT @The_RiotACT
This high-tech home offers a country lifestyle under a starry, starry sky - and it's less than an hour's drive from Canberra https://t.co/d4f9Wjshoi (1 hour ago)