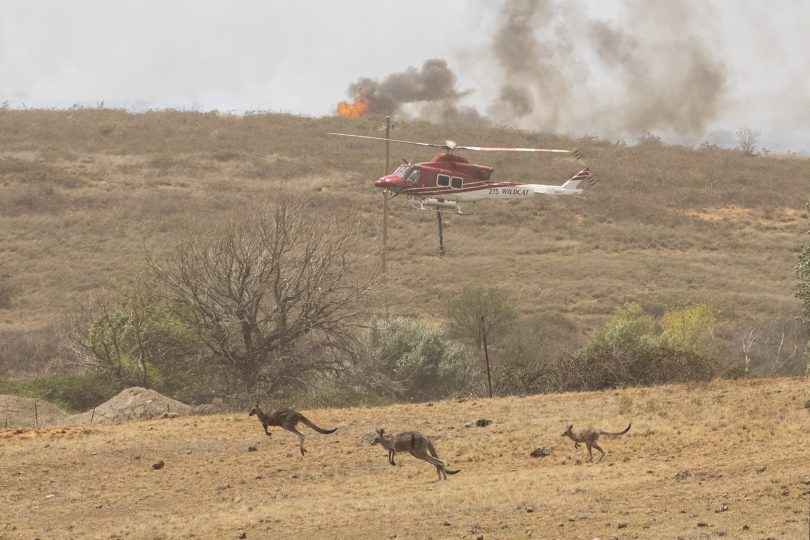 The Bureau of Meteorology has forecast the danger of increased risk from grass fires such as the Pialligo fire in February. Photo: Thomas Lucraft.

Floods and fast-moving grass fires fanned by strong winds and longer heatwaves in the ACT and southern NSW are the prominent warnings in the Bureau of Meteorology’s severe weather outlook from October to April.

The Bureau issued the long-term warning on the back of a wetter than usual spring which has led to abundant grass growth in the region and has the potential to increase the danger of grass fires as the weather warms in summer.

The designation of a La Niña also means it is highly likely there will be more cyclones in the north of Australia, leading to flooding that also has the potential to affect the region as the aftermath of the storms moves further south. 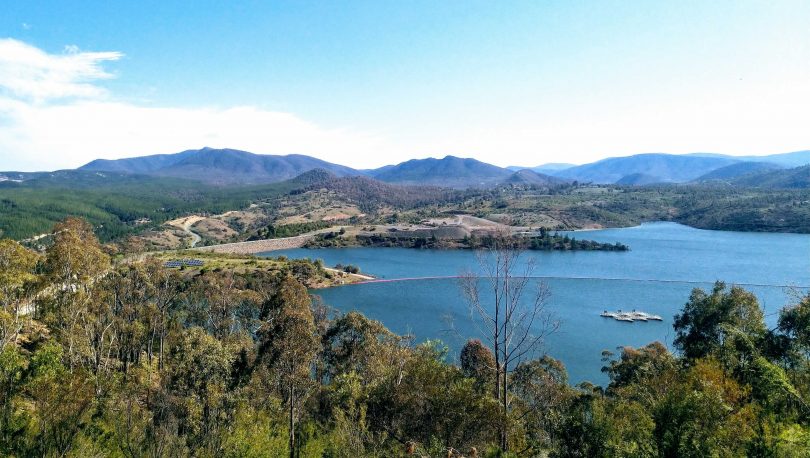 A very full Cotter Dam at capacity at the beginning of October. Photo: Michael Weaver.

In the ACT, the Bureau’s bushfire forecast is for less risk of large bushfires, but people in rural areas and on the urban edge of Canberra are advised to plan for fast-moving grassfires.

La Niña is also likely to bring more rain than usual with an increased risk of flooding.

In NSW, the Bureau says heatwaves could be more humid and last for longer, especially in southern NSW, while La Niña is also likely to bring more rain than usual with an increased risk of widespread flooding.

The potential for bushfires is normal, but more grass could provide more fuel in summer.

After the catastrophic fires of last summer, it’s a very different bushfire outlook this season, with average fire potential, although the Bureau’s general manager of Decision Support Services, Sandy Whight, said the lower fire risk across much of Australia is no reason for complacency.

“This fire season we’re expecting wetter-than-average conditions in eastern and northern Australia, so long-running large bushfires are less likely; however, a wetter spring can lead to abundant grass growth, which could increase fire danger as it naturally dries during summer.

“Southern Australia is one of the most bushfire-prone places in the world in any summer and it’s important to remember that, right across Australia, even short periods of hot and windy weather will raise the fire risk, so communities need to have their bushfire plans ready,” Mr Whight said.

“La Niña also brings more rain and increased humidity, which can mean fewer extreme heat days. But while heatwaves may not be as severe, the Bureau’s advice is that in southern areas they may last longer and be more humid – both of which can increase the risk to human health.”

Bureau climatologist Greg Browning says this summer is also likely to buck the trend of a decline in the number of tropical cyclones during recent decades.

“On average, Australia sees nine to 11 tropical cyclones each year, with four crossing the coast. With La Niña this year we are expecting to see slightly more tropical cyclones than average, and the first one may arrive earlier than normal,” Mr Browning said.

“Every northern wet season has had at least one tropical cyclone cross the Australian coast, so we can never be complacent. We know that cyclones can develop at any time throughout the tropical cyclone season, which runs from November to April.

“This means that communities right across northern Australia need to stay prepared now, and stay informed from the very start of the tropical cyclone season in October, right through until April,” he said.

While severe weather can occur at any time of year, this is the peak period for #bushfires, #heatwaves and severe #thunderstorms in the #ACT.

Many thanks in advance to all our emergency volunteers and staff in the ACT @ACT_ESA who help keep us safe https://t.co/oC9njJ94ta pic.twitter.com/kyoXWHZl4v

And for us in fire-storm-path suburbs – situation normal!

Acton - 25 minutes ago
Maybe you are right, but I was under the impression that shareholders bought shares in the hope that their price would go up.... View
News 3

rurallife - 29 minutes ago
Not everyone in Wallaroo has had a gutfull and feels the way these people do. Maybe call on all the neighbours and get everyo... View
BM - 4 hours ago
That should read... six, sometimes seven DAYS a week - from as early as 6:00 a.m. and often through to 6:00 p.m. - often at 9... View
BM - 5 hours ago
Yet another ACT Government policy disaster. The Government won't accept ENM and charge a fortune for accepting VENM. This all... View
News 15

bj_ACT - 2 hours ago
Can you point to why inner Canberrans are subsidising outer suburb Canberrans? The analysis I have seen has shown the opposit... View
brianf - 2 hours ago
I'm sorry Jam but successive auditors reports have failed to find any evidence of these supposed windfalls, and the whole bus... View
jam - 3 hours ago
sure, but a lot of revenue will be brought in from the land tax/rates on the denser developments justified by the light rail... View
Food & Wine 1

Capital Retro - 4 hours ago
Has the ACT Government ever actually repaid any of the huge loans it has taken on? My information is that it "rolls them over... View
thoughtsonthesubject - 5 hours ago
I am wondering whether Standard & Poor's is aware that the greater part of the infrastructure project - namely some $2 to 3 b... View
News 6

chewy14 - 5 hours ago
I'd be happy if they replaced the term "colonisation" but it shouldn't be replaced with something so undefined as "reconcilia... View
jwinston - 6 hours ago
Yet again more meaningless legislation that less than 1% of the care about. Fix the hospitals and education before implementi... View
show more show less
*Results are based on activity within last 7 days

@the_riotact @The_RiotACT
Canberra-based company @RandSNewsfeed has successfully listed on the #ASX, demonstrating the strength of the ACT's growing technology sector https://t.co/S90Eqep4K8 (33 minutes ago)

@the_riotact @The_RiotACT
A proposed amendment to the ACT's public place naming legislation could see the word #colonisation replaced with #reconciliation if it passes next year https://t.co/QwavXiPMg3 (3 hours ago)