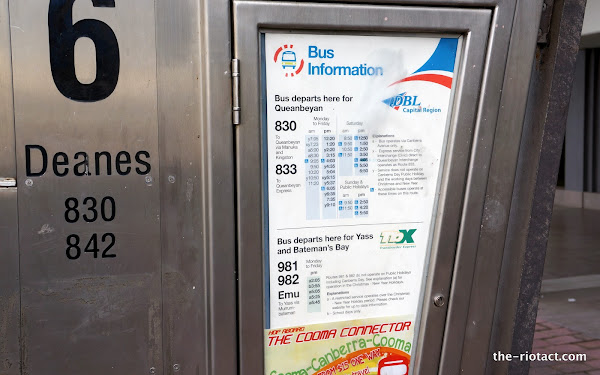 The Herald Sun has an intriguing story on ComfortDelGro Cabcharge (a joint venture between Cabcharge and Singapore’s ComfortDelGro) buying up Quanger’s busline Deane’s:

The two bus services, which ferry passengers between the NSW town of Queanbeyan and neighbouring Canberra, will take CDC’s existing bus fleet to more than 1,500.

CDC is the largest commuter bus company in NSW and has a smaller operation in Victoria.

If some regular buses could be arranged from Jerra direct to Civic and Woden I suspect they’d be packed. I’d definitely use such a service at least some of the time. Even at 6 or 7 bucks each way.

Deanes go where they are told to go by the ACT Government.

I wonder if CDC/Deanes will employ some common sense now that Edwin Land Parkway has been extended, and extend the 830 to Jerrabomberra via Karabar.

At present it’s a dogs leg route from Civic to Queanbeyan via the back blocks of Barton, Manuka and Kingston Shops, places which nobody in their right mind would get a bus to thanks to ample free parking.

I’d suggest they should make it run a more direct route from Russell to Fyshwick via Wentworth Avenue, and instead of terminating at Crawford & Morisset Streets, it should proceed down to Karabar, then across to Jerrabomberra Shops.

If the census data supports the idea that more than a few people in Queanbeyan, Karabar and Jerra work in Hume, they could continue the services through Jerra and terminate them at Hume instead.

Selected services during AMC visiting hours could also be extended up past Hume into AMC. I’m not sure how many of the friends and family of AMC residents live across the border, but Queanbeyan stereotypes suggest that it might be more than you’d initially think.

It would give people in Jerrabomberra and Karabar access to Queanbeyan and Civic relatively directly rather than the current routes that ply every possible back street throughout the region and typically require a change of bus to an equally slow route that then plies similarly obscure back streets through South Canberra before eventually reaching Civic. Installing some secure bike hoops at bus stops to allow people to cycle a kilometre from their home to the main roads where this bus service would operate instead would allow them to abolish their rather humerous local services. A few mobility impaired people could be encouraged to buy electric mobility scooters and take them onto the newer low floor buses, of which Deanes owns just enough of to make a more direct route network work.

And if ACTION ever gets around to extending the 200 past Beard and into Oaks Estate, thus gutting Deanes’ main cash cow, Deanes could timetable the newly extended service to connect with the 200 outside Beard or at HMAS Harman, and require a change for passengers headed on towards Canberra. The patronage they’d build in Karabar and Jerra would sustain the loss of everyone along Crawford Street and Uriarra Road that would happily walk or cycle over to Oaks Estate (or get someone to drop them off there) to pay $2.52 ($2 off peak) instead of $7.20 for a bus trip into Canberra. Deanes/CDC could still milk some revenue from the people of Queanbeyan that way.

If the ACT Government ever wants to resume the railway precinct at Kingston to build more yuppie flats along Wentworth Avenue, then ACTION/the ACT Government will need to extend the 200 into Oaks Estate (opposite Queanbeyan Railway Station) anyway, and make it a full time service too, or at least add services at night and on weekends to meet those Countrylink services. This is probably Deanes’ biggest fear, and is probably as good a reason as any for them to cash out of the service now that CDC is willing to put up some cash. If Countrylink were to truncate its Canberra Xplorer at Queanbeyan (and maybe later extend it further south if ARTC ever repairs the rail line to Cooma now that ARHS has lost the lease on that line), passengers would be able to transfer onto the 200 bus from Oaks Estate into Canberra. This wouldn’t be that different to the current situation where people get the train into Kingston and get the 200 bus from opposite the current railway station into Canberra.

Blake Anthony Cross - 25 minutes ago
It's too risky being in a relationship when you've earned what you have. And it's too costly to leave a relationship when you... View
Kim Bal-Al - 25 minutes ago
Alyssa Stuart maybe they were just fed up with hanging around their partners all the time and that's why they wanted a girls... View
Luke Ashe - 27 minutes ago
Karen Baldwin people ask you what your husband thinks about you being single? 😄 View
News 49

Shari Tiger - 38 minutes ago
I’m pretty sure the speeding fines at the infamous Northbourne Ave and London Circuit intersection have brought in enough $... View
Heavs - 1 hour ago
ACT Policing negotiating through the media again. View
John Giacon - 2 hours ago
The drug debate is relevant. If individual drug use were treated as a medical issue, rather than a criminal one, how many pol... View
Food & Wine 6

Anthony Philip Parker - 40 minutes ago
I'm feeling hungry just looking at that breakfast. View
Jasmine Elliott - 3 hours ago
Kynan Elliott you could do this View
Jane Farrugia - 4 hours ago
Went there for lunch the other day. Service was great, very friendly, food was really good, will definitely be going back🤗 View
News 13

JS9 - 48 minutes ago
Whether they should or not, the markets do care, because the credit ratings invariably drive the interest rate at which insti... View
JS9 - 50 minutes ago
To be fair - an implicit guarantee exists in the form of the RBA. Because it can always print money and buy Government bonds... View
Heavs - 1 hour ago
Dear Chewy and JS9. Thanks for pointing out how things actually work inside government finance. But actually, here is another... View
Community 8

kenbehrens - 13 hours ago
I think you know, but are choosing to ignore, the reason that patronage of the buses in the suburbia is relatively low. It's... View
Food & Wine 10

@the_riotact @The_RiotACT
RT @Breaking_247: ACT Health has confirmed eight new cases of #COVID-19 in the ACT, and there are no confirmed cases of the #Omicron varian… (20 minutes ago)

@the_riotact @The_RiotACT
In a tough year for #business, the @CBRBusiness has reported steady membership and new services for its members https://t.co/RSQ0GnCSmk (38 minutes ago)

@the_riotact @The_RiotACT
After two years the Canberra #Hospital Master #Plan is out. Take a look at the result https://t.co/IzT3fai8eh (1 hour ago)