Experts in buying, selling & renting
Your property, your future
15 November 2009

Today I was enjoying a coffee in a well known Canberra Cafe. While the service was slow, it was the behaviour of the waiter that really upset me. A young lady was trying to sell “The Big Issue” magazine on the pavement in the neutral area between Gus’s and Academy, close to the pedestrian crossing. The seller was not doing anything out of the ordinary and was making many sales while chatting to passers-by.

On several occasions, the waiter from the cafe approached the seller and insisted that she ‘be quiet’ and suggested that she move on. Furthermore, this request was made with no discretion or empathy for the seller. Myself and the person I was dining were not in anyway unhappy with this sellers presence, regardless, she was on a public walkway. Similarly, none of the many customers seemed bothered by her presence, many of whole were too engrossed in conversation to realised what was going on.

I was very unsettled to see this behaviour from the cafe. The way in which the waiter dealt with the seller showed a lack of compassion and he didn’t seem afraid of making a scene. Even if one feels she should not have been there, I can’t help but think the matter could have been handled with more respect for the individual.

Name the cafe so I wont go there.

As for the Big Issue – a much better read for $5 than anything else out there. The people selling it purchase each copy from the parent organisation for half ($2.50) and then keep the cover price, which in my Neanderthal head means that they make $2.50 per copy. Good on em for taking the initiative to earn a quid instead of just bludging off the government. I’m sure at 2.50 a copy they aren’t buying too many packs of tailors!

As far as I know, all the sellers have to apply through a community service that handles the Big Issue (possibly Communities@Work or Woden Community Service? I could be wrong) and that service tells them where they are allowed to sell. I think they also rotate the sellers, so they can all have turns at the most popular selling spots.

As opposed to the cafe customers sipping their expensive drug (caffeine) habit?

From a legal perspective though, do these sellers not need a hawkers licence? If they have one, then theyre entitled to be in the space. If they dont have one, is the waiter not in the right?

And you – so what if they are? They’re earning the money, they have a right to do with it what they want to.

Slightly related: saw a quite presentable younger guy hawking Big Issue last week – while chatting on his mobile. Made me wonder a little…

So, someone is out there, actively making an effort to support themselves, and you don’t think they should be using the money they are making to buy themselves a mobile phone? what?

Slightly related: saw a quite presentable younger guy hawking Big Issue last week – while chatting on his mobile. Made me wonder a little…

if i understand the cafe you’re talking about, then i think its location right on a busy road, ie sitting in exhaust fumes and constant traffic noise, is far more off-putting than a big issue seller trying to make an honest buck.

Maybe they didn’t want their staff to see how much money you could earn selling a homeless mag.

a callous waiter? i am shocked, truly shocked… 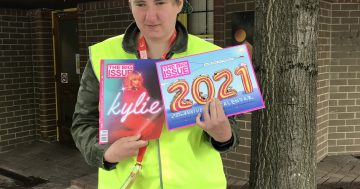