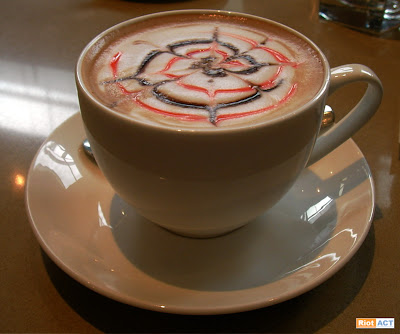 With it’s dark timberwork and leather you could think it had been there on Bunda Street for decades. If you didn’t know it was only opened a few months ago.

And the snootyness of the staff in their head to toe black! Snootyness like that doesn’t just come, it has to be worked on.

But what they’re selling is experience at a premium. And they deliver it in spades.

I know people from Melbourne who treat the Canberra Koko Black as a tourist attraction because they don’t have to queue up for a table like they do back home. It’s a mark of how Civic (or should I say “City”?) is moving up in the world that this cafe isn’t in Manuka.

In the pic you can see their chilli hot chocolate. The party-coloured drink packs a serious wallop. Between the heavy whack of the chilli and the sweetness of the chocolate it sets the nerves to jangling better than a double espresso.

Is it a chocolate shop? Is it a cafe? Is it *just* an experience?

I don’t know if I’ll be going too often, but I am rather glad I know it is there.

well I love it! Their hot chocolate is the best I’ve ever had. Pity about the prices though….

the chilli hot choc is great though.

but the service is sloooooow. I’d never go in if it looks full.

The chocolate cafe in kingston is also fantastic, and quite the opposite – very down home and cute. Definitley a one off. It is where the black swan used to be near the second hand bookshop.

Wait to be SEATED? Thhppppt. This is Australia. Bugger that. Find the local places that can make a good, honest coffee, and patronise them.

Sorry, agree with JB on this one, Koko Black rools.

I wouldn’t pay the premium price for coffee there (it is just coffee), but the chocolate mousse and hot chocolate is some of the best I’ve ever had (and I’ve had a lot). I’ve only been there once because it’s kinda hard to justify paying the incredible prices – but that said, I will be back – just not on a weekend.

Went there before lunch today. Waited ten minutes for table service in a near-empty store, had to go round someone up in the end. Ordered the chilli, got plain, couldn’t be ar.ed complaining. Haven’t had that problem before – service has been attentive in the past, even during busy times.

Service is terrible, coffee is average (we all know that Tonic makes the best coffee in Canberra – too bad they aren’t open weekends) and ambience is lacklustre. Johnboy, if this is what cuts it in Melbourne and Sydney they can keep it.

Koko is our regular stop on ‘shopping Fridays’ (distinct from ‘pub Fridays’). Sometimes it’s packed out and the wait for coffee would tip us over to an extra hour’s parking.

So when this happens, we get half a dozen chocolates from the front counter and duck across the road to Gus’s for coffee, or Milk and Honey for a chocolate cocktail.

I love chocolate and I wouldn’t be caught dead there.

Love the place, especially the chilli hot chocolate, but only during work hours for a Civic meeting – too crowded / too long to wait at lunch, and forget about it on weekends.

The best chocolate mousse in the world is the Toblerone mousse recipe that give out at Tupperware parties. Cream, egg, Toblerone melted in the microwave, sorted.

Ah! The voice of reason.

I was there at the weekend, and the bit that niggled a little with me was that they told us about the 15 minute wait to be seated, which was fine, but they didn’t tell us about the 30 + minute wait for any orders until we sat down. I would have preferred that info at the same time as the seating delay info.

I like Koko Black and it’s a favourite meeting spot of mine. I particularly like the chocolate mousse and the soy hot chocolate is actually done properly.

Alternately, All Things Chocolate in Kingston has been around for much longer and it’s a local business! I only recently discovered this place and am a big fan. Unfortunately it’s a bit hard to find (it’s in one of the arcades) but well worth it.

Alternatively, you could ditch the designer cocoa and head over to All Things Chocolate in Kingston.

to me, some of the best hot chocolate I’ve ever had, but it’s pricey. then again i’d choose coffee 9 times out of 10 so it aint so bad once in a while.

it’s okay, but it’s really nothing grand. the chocolate itself you can buy at the counter makes for a good chocolate mousse (and, of course, their in-house overpriced moussed isn’t so bad either), but everything else i’ve had there has been average at best. i’d expect a rich, sweet hot/iced chocolate, but it’s always milky and bland (that being said, i have quite a sweet tooth, so a richness to sate my expectations seems uncommon)

but yes. overpriced, overrated. the mousse is tasty, though.

i haven’t been back since their last round of price-hikes, though.

Robert McMahon - 51 minutes ago
It’ll dominate the skyline in that area. Oh dear. View
Shane Worthington - 1 hour ago
Rob Thomas whoda thunk? View
Deborah Gale - 2 hours ago
Geocon buildings that are inappropriate and unsympathetic to the area? How unusual. Let’s not be surprised when this is app... View
Property 7

Stefan Stirzaker - 2 hours ago
Good to see the white-anting after the fact in a bid to reduce the amazingly good job done by the upper leadership and member... View
HiddenDragon - 3 hours ago
The politics and the personalities are ultimately secondary issues - with increasingly nasty summers on the way, we need to d... View
Tina Newsome - 3 hours ago
I think they all did a bloody amazing job out there! View
News 15

Tiffany Roy - 2 hours ago
Canberra hospital's mental health ward is awful. View
Gary Hatcliffe - 2 hours ago
Wow! 8 beds. Aren't we lucky.... View
Jarrod Male - 3 hours ago
Bianca Rossetti ....let's hope. My understanding was that it has been on the table for over 10 years now. The legislation aro... View
Business 3

@The_RiotACT @The_RiotACT
The closure of the National Zoo and Aquarium was tough for local animal lovers, but over the long weekend, joyous kids and adults descended on popular Canberra destination when its gates swung open to the public for the first time since March https://t.co/8zvADdSmvj (55 minutes ago)