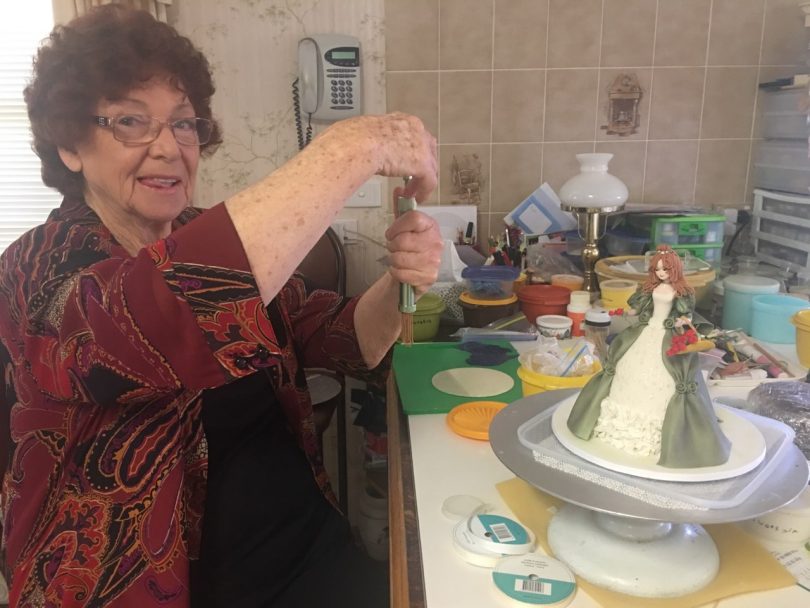 She’s been honing her cake-decorating skills for more than 30 years, taking out 15 Royal Easter Show titles, and now Canberrans will be able to see Kath Swansbra’s incredible work at La Grande Fête this Saturday 4 November.

Having crafted everything from a three-tier Anzac memorial to a sugarcraft tribute to Elvis Presley—complete with a candy pink Cadillac—the Parkes native’s latest creation tells a remarkable story of French-Australian relations.

Based on Derek Guille’s book, ‘The Promise’, the cake explores the story of the World War 1 battle of Villers-Brettenoux where 1200 Australians died saving the village.

A promise made is a promise kept: the cake is based on Derek Guille’s book ‘The Promise’, a story of heroism during World War 1.

The French have never forgotten the sacrifice—the Australian flag still flies over Villers-Bretonneux and a plaque tells the story of 1918. After the war, money donated from Victoria students paid for the rebuilding of the village school which was renamed ‘Victoria School’. 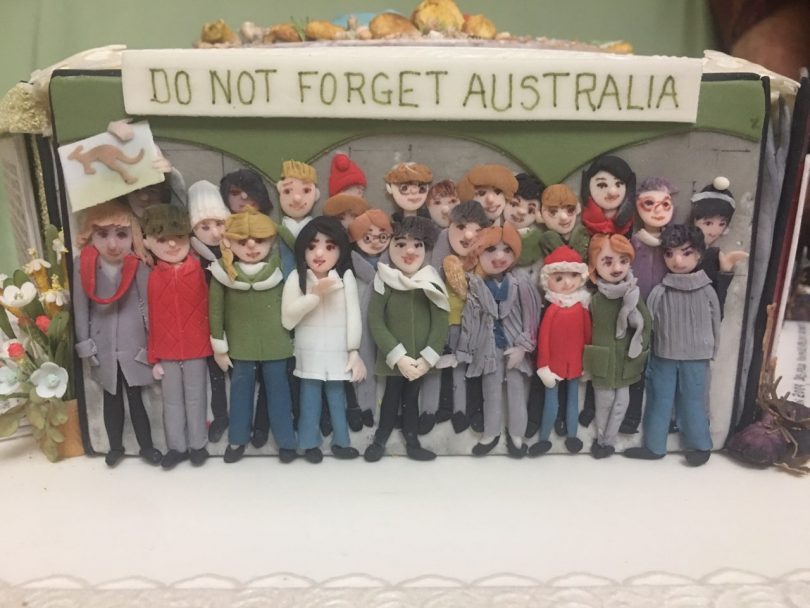 The cake tells an important story in history where Australia and France forged a bond of everlasting friendship.

“I had visited Villers Brettenoux but I didn’t know…that 100 years later the children and families of Victoria school in Villers-Brettenoux raised about $20,000 and donated it to Strathaven in Victoria following the 2009 bushfires,” says Kath.

“This story is so important to be taught to children as it promotes goodwill and friendship and the give and takes in society—something that I think we are losing in modern society.

“It also highlights the friendship, empathy, and understanding between France and Australia.”

The cake is a true work of art and took more than three months to complete. It depicts a range of rich scenes which tell the story of the relationship between the two countries, including: children attending to the Australian war graves in Villers-Brettenoux; the devastation of the 2009 Victorian bushfires; an Australian soldier helping a French man in the rubble of Villers-Brettenoux following the war; and pennies representing the money raised by the Australian children to send to Villers-Brettenoux to rebuild their school. 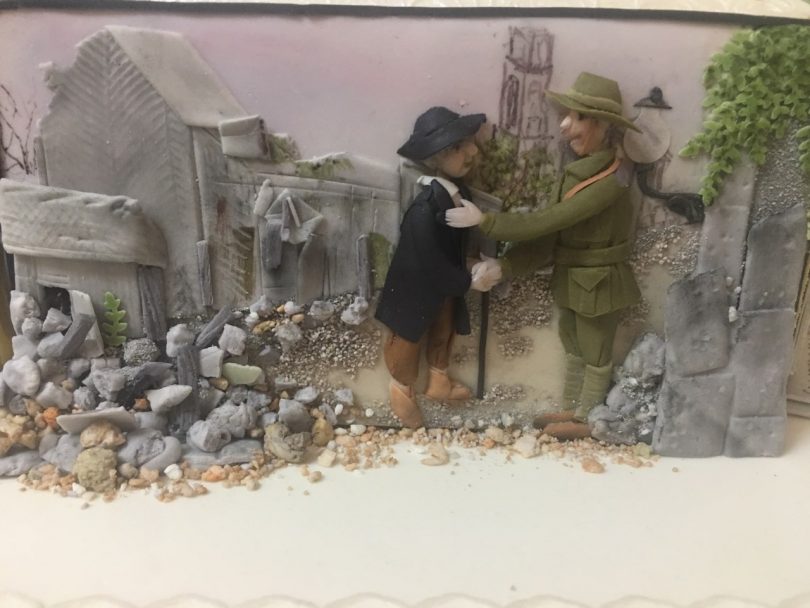 An Australian Soldier helping a French man in the rubble of Villers-Brettenoux following the war is just one of the depictions portrayed on this cake.

Painstaking research goes into every element of the cake.

“I was unsure of how poppy leaves are, so I planted some in the garden and watched how they grew, as well as did research at the local library about the history,” says Kath. 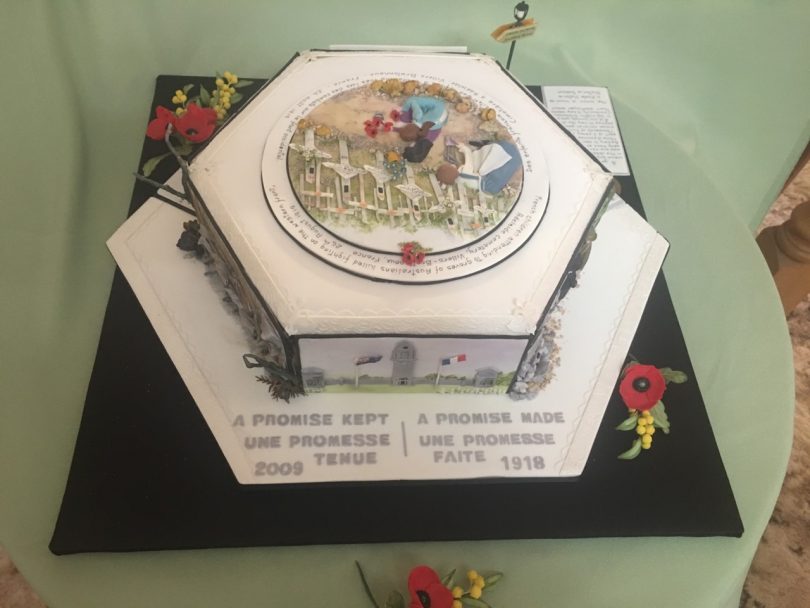 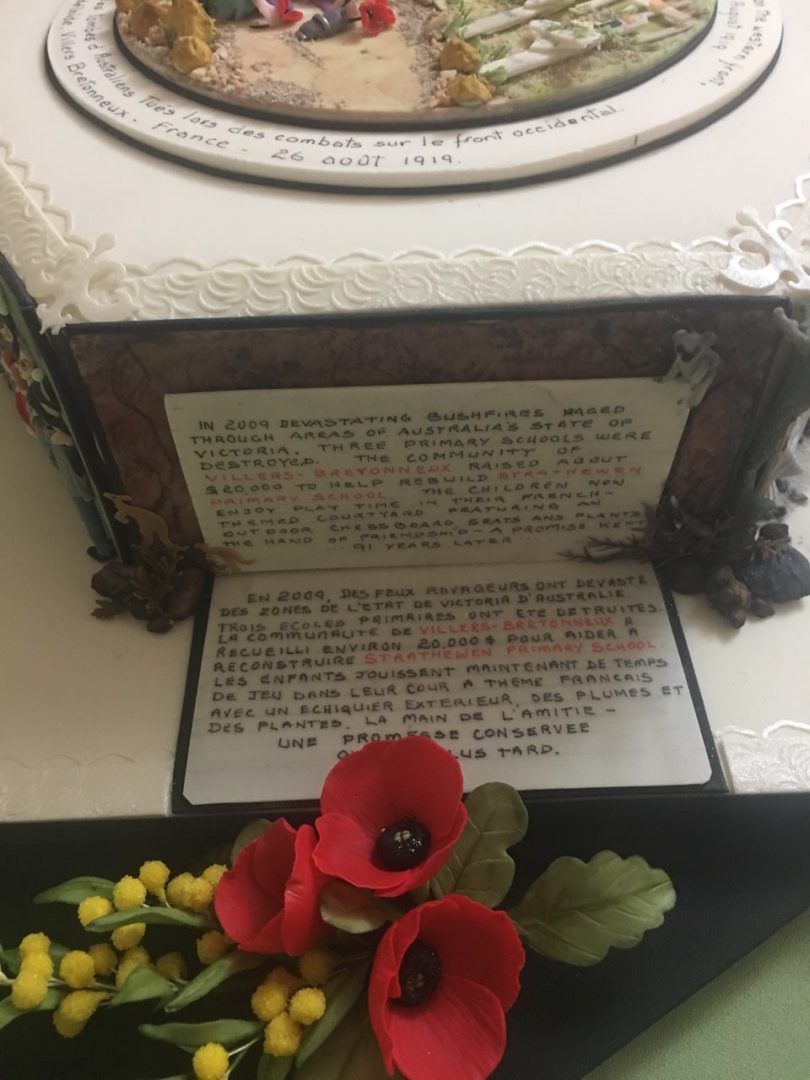 Long hours spent on research resulted in outstanding attention to detail, down to the intricate features of poppy leaves!

The donation of the cake is the latest act of generosity from this living treasure.

“Each year I make about 20 ‘cheer me up cakes’ at Christmas and I give them to the society in Parkes who organise meals on wheels to give to people in the local community who need cheering up.” 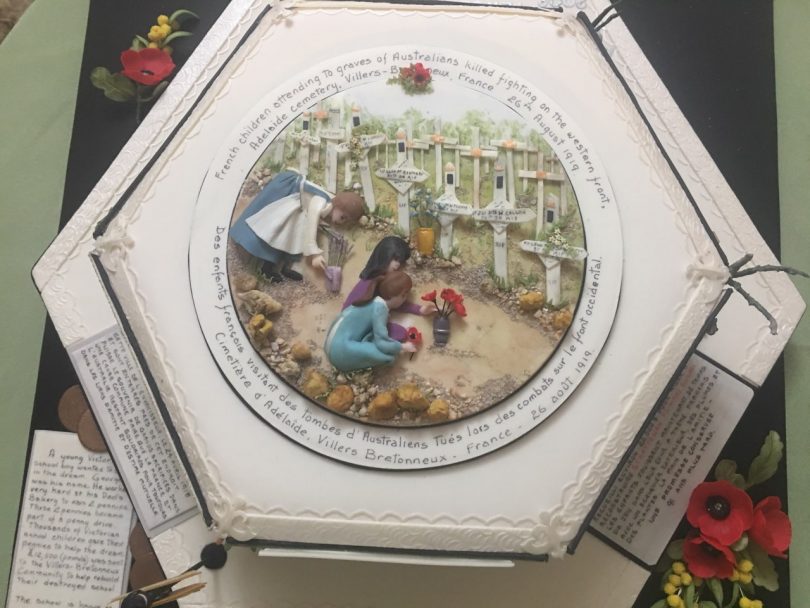 Children attending to the Australian war graves in Villers-Brettenoux 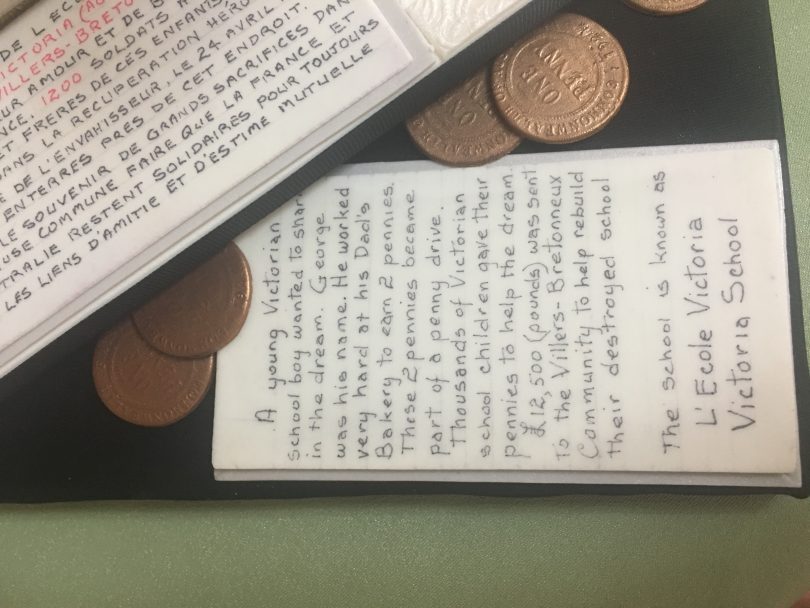 Kath’s Villers-Brettenoux cake will be a highlight of La Grande Fête, presented by Lycée Franco Australien de Canberra / Telopea Park School which is being held from 2:30 pm to 7 pm this Saturday 4 November.

One of the largest school fêtes in the ACT, the event promises live entertainment, international food stalls, carnival rides, the annual Canberra French Car Clubs display, preloved clothing and books, the monster Raffle Extraordinaire, beer and wine and a cornucopia of food.