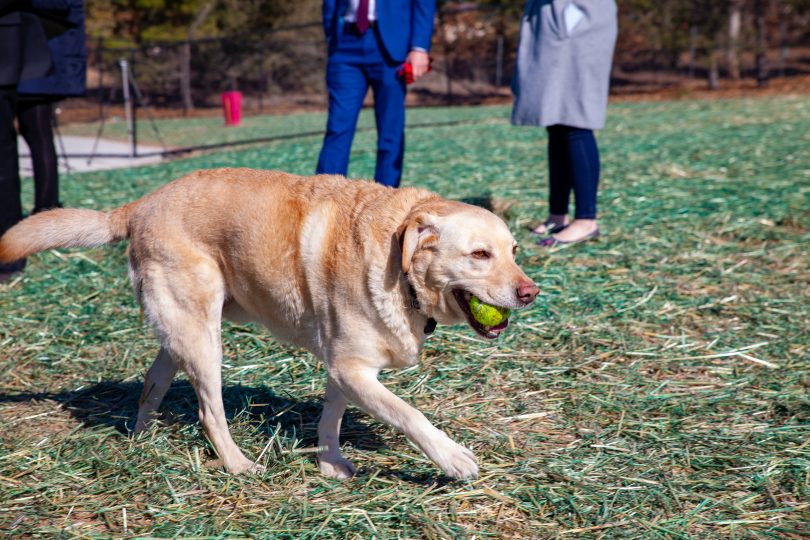 A local checks out the Weston Creek Dog Park at its recent opening. File photo.

Only a week or so after the Weston Creek Dog Park opened, there has been a call for a similar facility in West Belconnen.

Community activist and former independent candidate for the Legislative Assembly, Vanessa Jones has written to MLAs asking when her area’s 45,000 people will get a fenced dog park.

But the response has been far from encouraging, with a spokesperson for Minister for Transport Canberra and City Services Meegan Fitzharris saying there are no firm plans for any additional dog parks at this time.

Ms Jones said it was great to see Weston Creek get its dog park but she wondered when her area would also have one.

She said West Belconnen was a growing part of Canberra, with Ginninderry also being developed nearby, and the Kippax Oval was being utilised as a mixed use area where dogs were sometimes off-leash.

“People have been told they have to keep the dogs under control but that’s a bit of a grey area,” she said.

Mindful of the recent dog attacks in Canberra, Ms Jones said children often played there and that it was dangerous to have these combined areas.

“I’ve actually seen a dog attack down there, it happens all the time. And you wonder if children were there what would happen,” she said.

“Better that the dogs be with each other instead of intimidating children from running around.”

While the Minister’s spokesperson and Labor MLA Tara Cheyne pointed to the Belconnen Dog Park next to Lake Ginninderra, Ms Jones said many residents could not afford the extra expense to travel there.

The spokesperson said Canberra’s seven dog parks were strategically located so they were accessible as possible to a large catchment area.

“The demand for and usage of dog parks is continually being monitored by Transport Canberra and City Services and while additional dog parks may be built in the future to meet continuing urban growth and densification, there are no firm plans for any additional dog parks at this time,” the spokesperson said.

“Residents in the West Belconnen area may choose to use the existing dog parks at Diddams Close in Belconnen or Yeend Avenue in Casey or one of the many designated dog off-lead areas across the area to exercise their dogs.”

Ms Jones said being in a safe Labor seat, West Belconnen tended to be forgotten but it did have a sizeable population and should have what other areas took for granted.

Dog parks, compared with other facilities such as pools, were relatively low cost and low maintenance, and she was hoping to generate a community discussion about the issue.

The Minister’s spokesperson said community consultation about a range of dog management matters was due to commence soon. Further information and a survey will be available via the www.yoursay.act.gov.au website in the coming months.

Jack Wiles - 24 minutes ago
It's not the type of meeting place depicted by so many comments; it's not somewhere you would take young family but is a plac... View
News 15

@The_RiotACT @The_RiotACT
Fire, smoke, flooding and the worst pandemic in a century, oh, and don't forget it's also tax time. But it's not all bad news. Tax help is available from the ANU https://t.co/hBNZJlqa0V (4 hours ago)

@The_RiotACT @The_RiotACT
NSW needs to employ 1000 additional firefighting staff if it wants to handle another Black Summer bushfire season, according to the union which covers the @NSWRFS https://t.co/FSx0LEJPQm (5 hours ago)