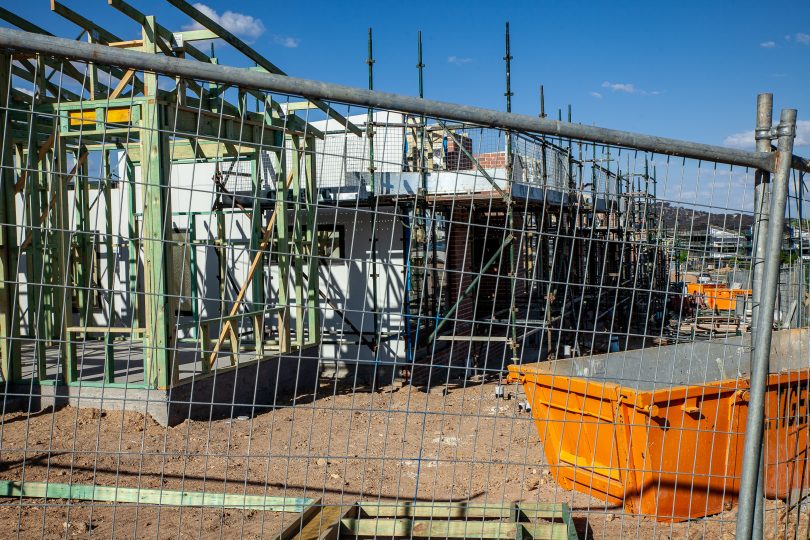 Construction in the ACT is declining, which has been compounded by COVID-19 restrictions. Photo: File.

Relief from lease variation charges and accelerating the phasing out of stamp duty have been urged to avert the ACT construction industry – particularly the apartment sector – falling off a cliff during the next 18 months.

The COVID-19 shutdown has exacerbated the decline in dwelling starts in the ACT and a new report from the Housing Industry Association (HIA) predicts a 50 per cent fall by the end of June next year.

HIA regional executive director Greg Weller said this scenario would have a very significant impact on jobs and small businesses. Nationally, the HIA fears for half a million jobs in the housing industry as a result of the slowdown.

Mr Weller said that in the ACT the loss of international students and overseas migration due to COVID-19 has played a big role in the deterioration of demand.

“The ACT entered this shock in a strong position, with economic and population growth driving demand for housing,” he said. “The loss of foreign students, tourists and migrants is a major hit to the ACT, even if the stable public employment base protects the broader economy somewhat. 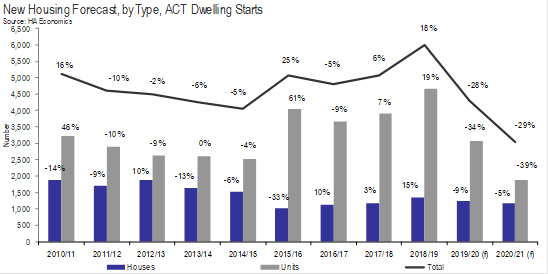 “The ACT was heavily exposed in that market and that’s what is driving a lot of the high-density living as well.”

Mr Weller said the government could provide a carrot to the industry to keep projects flowing by waiving the lease variation charge for already approved developments that got underway within a certain time period of, for example, six months.

“We think giving up, for the short-term, the lease variation charge is an opportunity to get some projects off the ground,” he said.

Mr Weller also said there is more that can be done in the low-density, multi-residential area to make it easier, less time consuming and less costly to build in the suburbs.

He is heartened to hear ACT Chief Minister Andrew Barr talking about streamlining the planning system because there is too much red tape holding back smaller, simpler developments.

It’s not just new dwellings that are declining, but also renovations and alterations.

The HIA says $19.5 million worth of alterations and additions work was approved in the ACT during the March 2020 quarter, an 18.8 per cent decline from the previous quarter.

During the December 2019 quarter, the value of renovations activity fell by 4.4 per cent to be 3 per cent lower than the same quarter last year.

If things have been so good how come the government is deeply in debt?

Where has all the prosperity from the massive increases in rates and services gone really gone?

“…..the loss of international students and overseas migration due to COVID-19 has played a big role in the deterioration of demand…”

Some of that demand is likely to be a permanent loss, regardless of what eventually happens with the virus, closed borders etc. so governments, including here in the ACT, should be thinking about transitional arrangements for the building workforce. Part of that might be public funding to improve skill levels.

Any further changes to the ACT planning system should be done with a long term view – not “emergency measures” which might lead to further problems down the track.

James Dof - 5 hours ago
I take the bus to get to the bus terminal with luggage and like I said it's 45 mins to civic and an hour less travel on the b... View
Julie Macklin - 5 hours ago
James Dof A bus every 15 minutes from Civic. In practice thought I imagine most people, even if there is a regular bus from w... View
James Dof - 9 hours ago
For me to catch a bus from Macquarie to Kingston it would be an hour and a half and an hour slower slower on the train than t... View
Business 3

Candace Aitchison - 5 hours ago
Lucy is amazing!! Such a beautiful young lady! It’s always such a pleasure going into the chemist 🙂 Congratulations Lucy... View
Anthony Crocker - 11 hours ago
I’ve always found her very helpful, friendly and knowledgeable. Congrats 🥳 View
Phyl Oliver - 12 hours ago
Congratulations Lucinda, you are at the best chemist ever! View
Sport 5

Sylvia Brooker - 12 hours ago
Thanks Leong kitchen, you will be missed by many. All the best for the future. View
Property 5

Katie Tranter - 17 hours ago
We’ve had a pair visit a lot recently. So beautiful 😍 View
Elizabeth Ann Thurbon - 19 hours ago
What about in the home garden? Do they make a good display when grouped together in a mass planting?... View
News 17

@The_RiotACT @The_RiotACT
Two ecosystems in the ACT have been classified as critically endangered as the government moves to standardise the classification of threatened ecologies with the Commonwealth https://t.co/LMwDBDOveT (7 hours ago)

@The_RiotACT @The_RiotACT
Have you seen 15-year-old Hayley McNally, who was last seen in Amaroo on Saturday night? https://t.co/n7vkkxaoHC (8 hours ago)