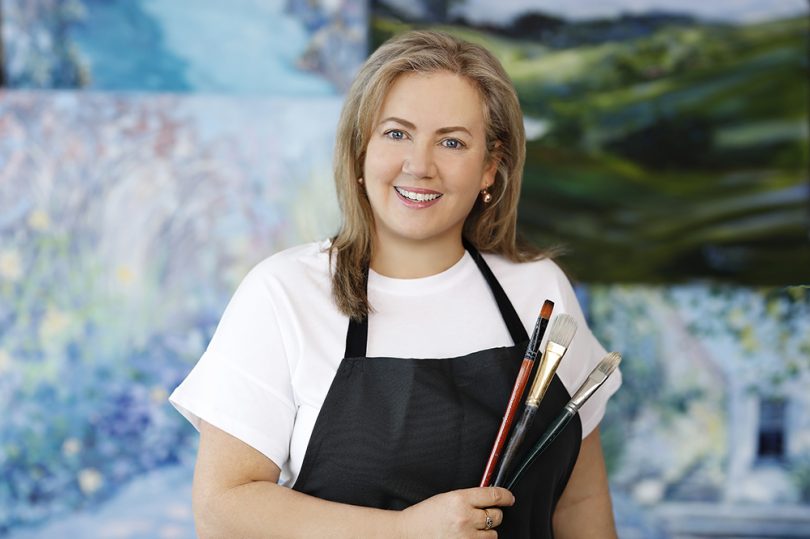 The artwork of Meredith Howse – a former Cootamundra High School student – has received national attention after two of her paintings were selected to feature on The Block. Photo: Supplied.

It was a quiet Sunday night in front of the television for some of Cootamundra’s residents when – to their unexpected delight – a name from days past broadcast into their living rooms.

Howse – huh? – that rings a bell. Wasn’t there a district engineer who worked for the shire by that name? Didn’t he have a daughter by the name of Meredith? Wait a minute … didn’t she go to Cootamundra High?

Social media bubbled over the next 24 hours and, yes, of course – it was Meredith Howse.

And for fans of Channel Nine reality show The Block, it was Meredith’s artwork Our Sunburnt Country and Old Regret that featured on reveal night in the home of one couple competing for renovation glory. 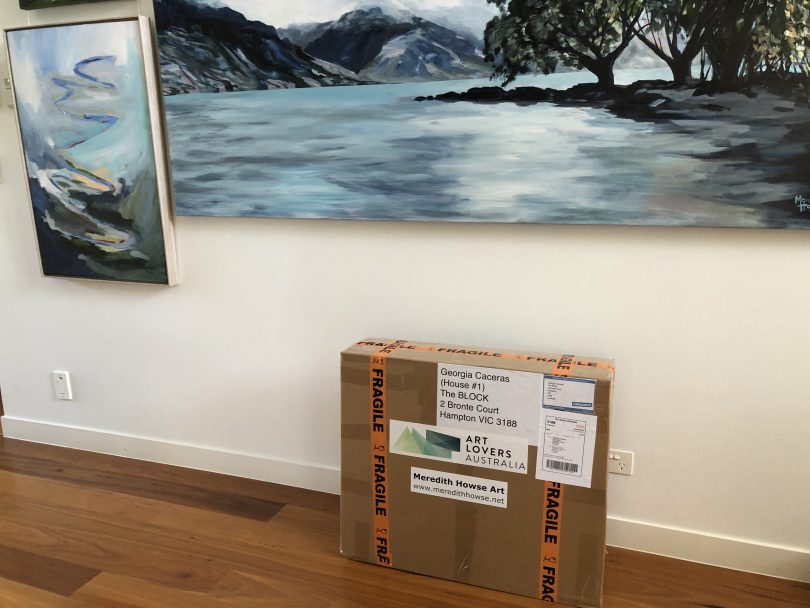 When the phone call came through, Meredith was shopping, so she rushed home, packed the paintings and there they sat ready for collection. Not that she could tell anyone! Photo: Supplied.

Meredith had indeed been selected by popular duo Georgia and Ronnie Caceres, who have been vying for pole position on the show with their earthy interior décor style which reflects a deep connection to nature but with an abstract twist.

Nobody was more surprised than Meredith who told About Regional that a while back she was shopping when out of the blue, she received an urgent phone call for her art to be sent to Melbourne as quickly as possible for the high-rating renovation TV show.

“It was such a surprise – I had to move super fast. I dashed home, packaged them and booked the courier,” she explained.

“And there they sat – labelled direct to Georgia – House 1 – from The Block.”

“They were shipped the next day. Then, I had to zip it, – my mouth. Which was pretty hard for me, I wanted to tell the world but couldn’t… such is the secrecy around Sunday night reveal nights,” she said.

The names for the featured works, part of a series called Colours of Texas, were taken from her two favourite Australian poems – I Love a Sunburnt Country by Dorothea Mackellar and The Man from Snowy River by AB “Banjo” Paterson.

Her sophisticated collection of abstract landscapes – acrylic or oil on canvas – leverage the colours of the NSW countryside using rich deep greens, earthy browns and warm ochres, with a splash of blue to symbolise our rivers, dams and blue skies. 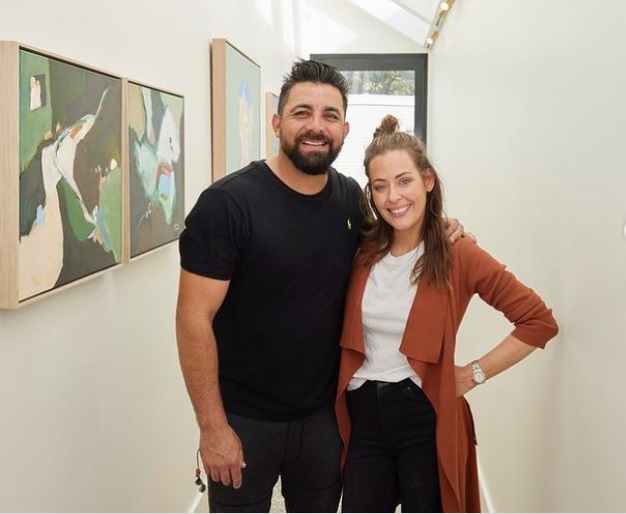 Meredith says she finds beauty and drama in natural landscapes.

“I try to give the landscape paintings a dramatic feel, drawing the viewer into the painting,” she said.

“Using a bird’s-eye viewpoint and a textured canvas, connections are made between colours and lines,” Meredith said.

“I want you to feel you are in the painting and feel the cool depths, the power charge of an incoming storm, the warmth of the sun, or the salt in the ocean air.”

The landscapes of Bathurst, Lismore and Cootamundra – towns her family lived in, remain deeply embedded in Meredith’s mind.

“As a family, we travelled all over the state exploring the surrounding towns,” she said.

After graduating from Cootamundra High School, she finished her education at the University of Technology in Sydney and now resides in Brisbane with her award-winning works selling internationally.

An artwork titled “Cootamundra” now adorns a home in Canada.

But she returns frequently – earlier this year for instance.

The resulting artworks – which include pieces inspired by, again, Cootamundra’s surrounds, the Murrumbidgee River and the Japanese Gardens at Cowra, now form part of her current body of work.

“The gardens particularly were like an oasis on a hillside,” she said.

“This is what inspired the painting, ‘Japanese Gardens at Cowra’.

Since the big reveal of October 10, Meredith has been inundated with calls – especially from her Coota mates – full of congratulations.

“Who would think they would choose my work – not me,” she said.

“A girl who did art as her favourite subject at Cootamundra High School.”

“But this is what my art journey is about – sharing a love of art and making something great to stick on the wall and make it feel like home,” she said.

Really, I want to thank everyone for their support – especially those in Coota who took time out of their lives just to say ‘well done’.