Connecting people and supporting
business for 100 years
5 May 2021

5 May 2021 | Dominic Giannini
Start the conversation 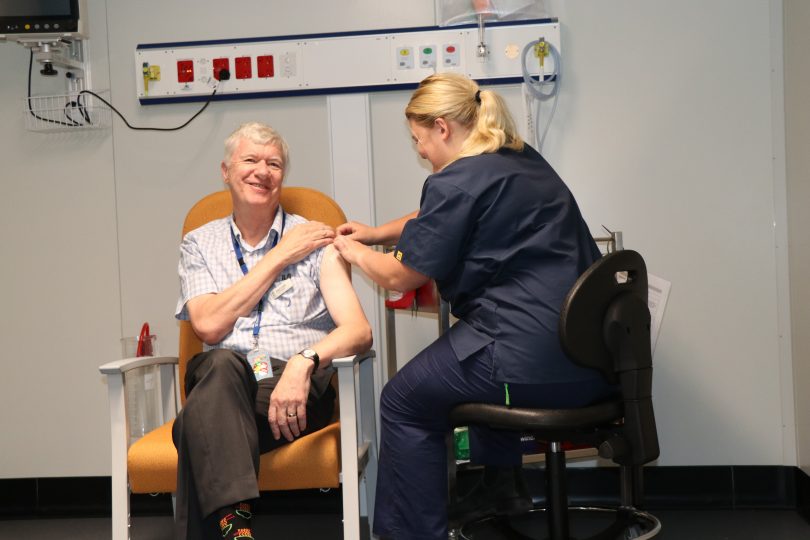 The ACT Government has increased the number of appointments available to the newly eligible cohort of 40,000 Canberrans. Photo: Supplied.

An additional 200 to 400 Canberrans will be able to receive their AstraZeneca jab each week after the new ACT Government-run vaccination centre at Calvary expanded its capacity in response to demand.

The clinic, which opened on Monday this week, was booked out until the middle of next week after 40,000 Canberrans over the age of 50 became eligible to get the jab this week.

More than 1600 Canberrans were booked to get the COVID-19 vaccine at either the Calvary or Garran centres as of Tuesday afternoon (4 May). Another 1700 had made a booking within the following 24-hours.

The Calvary centre was always due to ramp up appointments as supply from the Commonwealth Government increased; however, this was brought forward after thousands of Canberrans started booking in for the jab.

Calvary will now be able to deliver around 1000 vaccines a week, Health Minister Rachel Stephen-Smith confirmed.

It was originally set to service between 600 and 800 Canberrans a week.

More than 8,200 Canberrans will now be able to be vaccinated between the two clinics each week.

The ACT Government confirmed that it paused shipments of AstraZeneca vaccines earlier this week and will not receive any more doses over the next fortnight, insisting it already had enough supply to meet demand.

Instead, the government has opted to receive more Pfizer vaccines to help people under the age of 50 who have been advised to preference Pfizer over AstraZeneca due to the rare possibility of blood clots.

The government confirmed it had received 1700 doses of AstraZeneca on Sunday (2 May). It is enough to cover the clinic until GPs join the expanded rollout on 17 May.

The government also expects to receive a combined total of 11,700 doses of the Pfizer vaccine over the next two weekends.

Chief Minister Andrew Barr has also flagged the possibility of a third government-run vaccination hub in the ACT, contingent on vaccine supply from the Commonwealth.